That confirms her faith in humanity 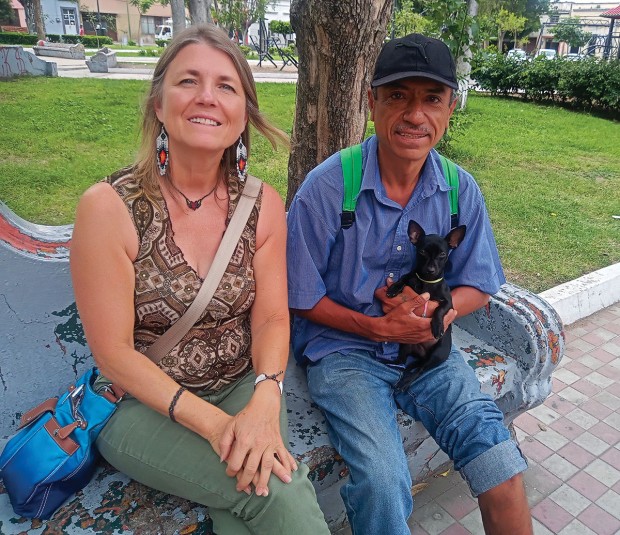 NEW PASSPORT, NEW PERSPECTIVES Travel writer Tracy Barnett details her own journey of a lost passport. Connecting with Santiago, who found her passport and called her – even though he could have sold it for much-needed rent money – was an inspiration. Pictured, in a park around the corner from Tracy’s home in Guadalajara, Mexico, is Tracy with Santiago and his dog, Mía.

I was all packed and ready to go. I’d called my daughter, Tara; we’d been planning the details of my trip from Guadalajara, Mexico, where I now live, back to Missouri for more than a month already.

If all went well, I would be arriving in time for lunch with my little granddaughters, Rasai and Arayah, whom I hadn’t seen – except on Messenger chat – for nine months. Tara had orchestrated a packed itinerary of activities, and the whole weekend was dedicated to reconnecting with the little girls. I was pretty excited, too.

But all, unfortunately, did not go well.

I hung up the phone with Tara, bid farewell to my guests in the other room, and headed out for my last two errands. I jumped on my bike and made the loop through downtown Guadalajara and was back in time to have a relaxed dinner with my godson Bernardo, reflect on the new chapter ahead of us, and give him a sweet farewell.

Now it was time to pack my last items. I made one last passport check – I always kept it in a special pouch on the back side of my purse. But the passport was not there.

My mind flew into a review of all my past activities. I checked every bag, every drawer, every corner where I might have misplaced it. My mind kept going back to the same possibility.

I had taken the passport out to enter the number when I checked into my flight online.

I didn’t remember putting the passport back in its special compartment. But my mind kept going back to the possibility that I had done so, and forgotten to zip it.

It was 10 p.m. and there had been a hard rain after I returned. Still, I had to see if I could find it. I jumped on my bike and did the whole circuit twice. Nada.

Bernardo and I spent much of the night tearing the house apart, looking to see if I had absently dropped it or placed it somewhere and forgotten. I couldn’t stop seeing my daughter’s excited face, thinking of how disappointed she would be.

Finally, at 4 a.m., the hour I had set my alarm to have plenty of time to get to the airport, I accepted the bitter truth. I would not be going to Missouri this day.

The next morning, I went back around the circuit, posting signs with the hope that an honest soul had found it. One man saw me and read it out loud. “Oh, that’s been sold, for sure. A U.S. passport is worth $500, minimum. I wish I could find it, I’d love to go to Los Angeles!”

My heart sank. Still, I kept posting the signs. But… nada.

I learned that emergency passports are so backed up because of Covid that it would take at least six weeks to get one. I had only six weeks for this visit; then I needed to be home because Bernardo’s college classes were starting.

Casting about for options, I contacted my friend Felicia Rangel-Samponaro, founder of the Sidewalk School for Children Asylum Seekers, who helped me to devise a Plan B. She confirmed  I could cross the border by foot without a passport, and helped me find the cheapest and safest way: Fly to Tijuana, walk across the bridge and take a taxi to San Ysidro, where I could catch a shuttle to San Diego, and catch a flight to Missouri from there. My mother and my daughter pooled resources to help me buy two more tickets.

Travel time arrived once again at 4 a.m., and I bid one more farewell to Bernardo, who was still up, finishing a final project. By 6 a.m. California time I was touching down in Tijuana, enjoying my last street tacos and heading for the border crossing. To my dismay, the line stretched as far as I could see. I walked and walked and finally stopped. “Is this the end of the line?” I inquired. “No,” said the man. “But I can help you get up close to the beginning, for just $20.”

I didn’t stop to ponder the fairness of being able to afford that $20 in a sea of people who could not. I produced the bill, and the gentleman called someone on his cell phone and led me through the crowd to a place within view of the coveted entry gate. The system was clever; one of their crew showed up early and held a space near the front while the others scouted the crowd for likely clients. I wasn’t sure about the ethics, but I took my place gratefully and soon began chatting with the people behind me, who didn’t seem bothered by my cutting in line. 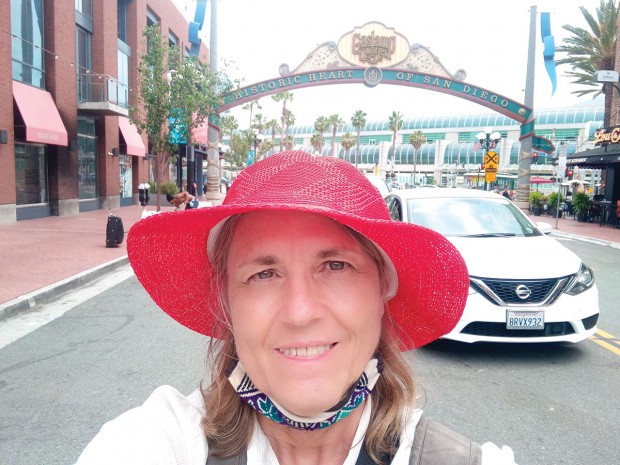 SIGHTSEEING IN SAN DIEGO Never one to miss an opportunity for tourism, even after a hectic day walking across the border, travel writer Tracy Barnett seized the moment to check out the Gaslamp Quarter, Seaport Village, and Old Town – some charming bits of Spanish Americana on the southwest edge of the country.

Two hours later, I was learning to navigate the San Diego Trolley. Never one to miss an opportunity for tourism, for the cost of an $8 day pass, I was able to make my way to my budget hotel, explore the historic Gaslamp Quarter and Seaport Village, and watch the sunset over the bay from Old Town.

Thanks to my mother and my daughter and Felicia, I touched down in Columbia, Mo., just four days after the appointed date – still in time for lunch, with my excited granddaughters in tow.

I waited a week to see if someone would find my passport and call me. But… nada.

Worried about identity theft, I reported the loss and applied for a new passport.

Four days later, I got the call. It was a Guadalajara number.

The woman on the other line was holding my passport. Her brother, a disabled man who sold candies and peanuts in the historic center, had found it.

The U.S. passport agency was very clear. Once you report a passport lost or stolen, it is no longer usable. So I thanked the woman and told her I’d look for her when I got back home. I contacted my state representative, who intervened on my behalf, and I got my new passport in time to fly back to Guadalajara, thankfully, without having to walk back across the border in Tijuana.

Fast forward two months, and I’m back in Guadalajara. I get a phone number I don’t recognize.

“Hola, señora. I’m the person who found your passport. Do you still need it?”

Well, I didn’t really. But there was something in his voice.

“Are you offering some kind of reward? I don’t want you to think badly of me, but I need to pay the rent for my room. And I don’t have enough right now to even buy a taco.”

Santiago was his name, and I met him on the plaza. He was a kind-faced man with a bad leg injury from a motorcycle accident – he had swerved to miss a young man who had walked in front of him at an intersection, he would later tell me. He was about my age, with a tiny black chihuahua named Mía as his companion.

I was happy to meet him and Mía and happy to get my old passport back. I asked him if we could take a selfie. Sure, he said.

He told me the story of how it had caught his eye on the side of the street and how he took it home and couldn’t decide what to do with it; he thought of taking it to the police, but he didn’t trust them, and he didn’t want to be accused of stealing.

“My father, may he rest in peace, told me when I was young that if I ever got in trouble and ended up in jail, to call him and he would come and get me – but not if it was for stealing,” he told me. “He told me that stealing is the worst thing you can do.”

And then he began to cry a little, as he remembered his father, who had died recently in the hospital and he hadn’t been able to see him or wish him farewell.

Finally, he told me of the day he saw one of the signs I had made and gave the number to his sister to call me. Since I hadn’t called back, and, casting about for a way to pay the rent, he took the initiative to give me a call.

Seated there on the park bench with him after the selfie, I thought about how much it would have changed his life – at least for the short term – to have sold that passport. And he knew it. Everyone knew the value of a U.S. passport. But he chose to track me down instead.

The old passport no longer has any value, on the street or in my wallet. Except for one thing.

It reconfirmed for me, once and for all, the crazy, unquenchable faith I have in humanity.