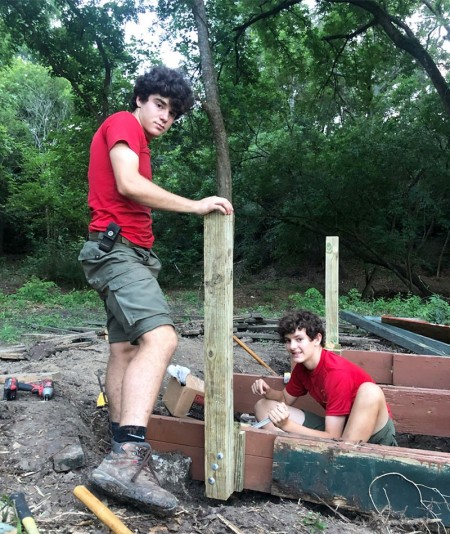 Alex Haug up early and ready for work

Over the summer, senior Alex Haug rebuilt the bridge that connects St. Francis to Buffalo Bayou for his Boy Scout Eagle Project.

“I wanted a project that was part of my community,” said Alex. “What better place to pick than St. Francis?”

Students and faculty use the bayou for creative projects, including plays and musicals. During last year's spring play, Alex noticed that the bridge was falling apart. Concerned for students' safety, he took it upon himself to fix the bridge over the summer.

Alex is one of the founding freshmen that helped start the St. Francis upper school. He is head of the theatre tech crew and is student body president. Alex has been a Boy Scout since childhood. Becoming an Eagle Scout has been his main goal since he was a Cub Scout. It’s been a long journey from freshman year. He said that it only felt right that he returned the favor.

At the start of the summer, Alex got to work immediately. He worked from when the sun rose to when the sun set. It took many hours and was far more challenging than expected. With each obstacle, Alex had to rearrange his planning. He quickly learned he couldn’t make a completely new bridge but had to use the old foundation. There were many frustrating days, but Alex was determined.

Being a Boy Scout was an honor for him and quitting wasn’t an option. After long days and hard work, his project was finished on June 11, 2021. Where once there was a decrepit bridge barely hanging on, Alex built a sturdy and safe structure that the St. Francis' community will use for years to come. 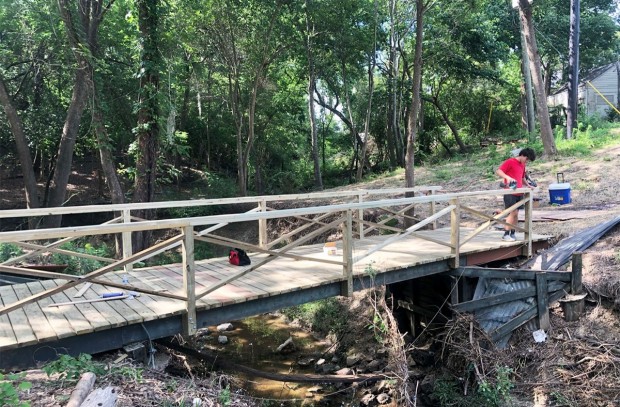 Alex Haug putting the final touches on the bridge

At St. Francis, we strive to be people for others. Alex Haug embodies our ethic of self-sacrifice. By giving up his summer for this project, Alex gave back to the school, which has given him a high school experience like no other. Alex hopes he inspired other St. Francis students to be people for others and to undertake similar service projects for their communities.