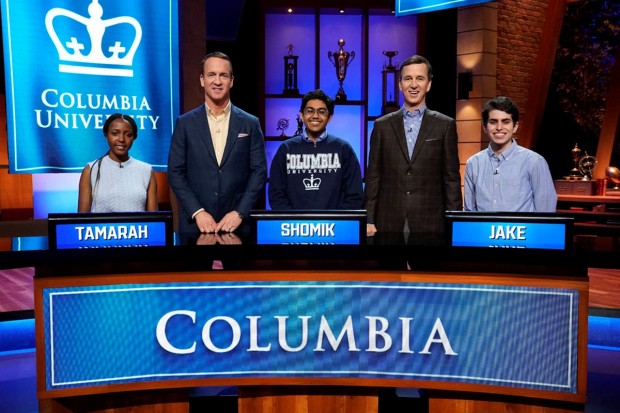 It’s not every day you hear, “If you study really hard, one day, you’ll star on national television alongside Hall of Fame football player, Peyton Manning ….”

But that is exactly what Houston native Shomik Ghose did as team captain of the Columbia University team on NBC’s Capital One College Bowl television show hosted by none other than Peyton Manning and his very funny older brother, Cooper Manning.

College Bowl began as an entertaining radio show after World War II and then as a television show with various formats from 1959 until 1988.

A reboot of the classic show, the new College Bowl concept consists of teams of three from 12 major colleges competing to win scholarship money in an ultimate test of their general knowledge. The first 10 episodes of the 2021 competition aired over the summer. The finals featuring the Columbia University Lions vs. the University of Southern California Trojans will air Tues., Sept. 7, 9 p.m. CST on NBC.

Shomik and his teammates, Tamarah Wallace and Jake Fisher, are excited to be representing Columbia. Alternate Addis Boyd played an important role in College Bowl preparations including brainstorming strategies for answering questions. The group did not know each other before the competition and have formed friendships through the experience.

Shomik, a 2019 graduate of St. John’s School, said that his experience participating on the Quiz Bowl teams for SJS as well as TH Rogers during middle school has been a big help.

“I've been playing Quiz Bowl since 6th grade, and that experience definitely helped a lot on College Bowl. All the studying I had done for years helped build my knowledge of the subjects they asked on the show. I felt well-poised to answer questions in the Two-Minute Drill as I was familiar with the fast pace and high stress, coordinating with teammates and making split-second decisions.” 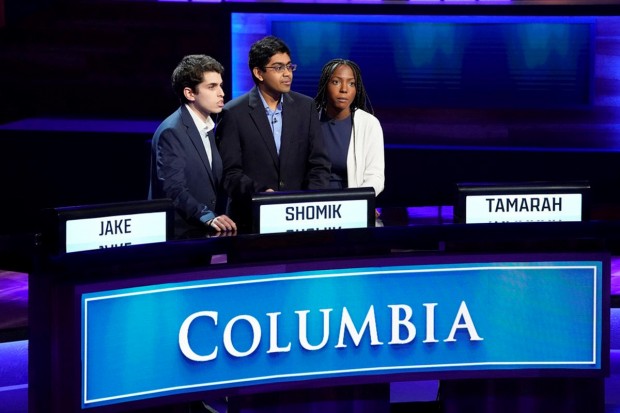 Shomik also noted, “I'd like to give a special shoutout to my St. John’s Quiz Bowl coach David Nathan, as he was very helpful in shaping my leadership and knowledge that I was able to display on the show.”

Participating in Quiz Bowl on a national show has been exciting but nerve-wracking, Shamik said. “On one hand, I was looking forward to being able to display my Quiz Bowl abilities on a national stage and compete against other universities for scholarships and school pride. On the other hand, I was definitely nervous about what others would think of me and how I would come across. Luckily, judging by the reception so far, it's been going pretty well! I definitely have acquired some new social media followers, and just hope that viewers have been enjoying the show.”

Shomik is a huge football fan, so meeting Peyton Manning was a special highlight for him. “The first time I spoke to him on set was a really unreal moment for me. I also enjoyed hearing some of his anecdotes about his career, such as when he shared how he felt about being inducted into the Hall of Fame with us. The only thing I had to make sure not to tell him was that my favorite football player was Tom Brady! I also enjoyed meeting Cooper; even though I didn't know as much about him beforehand, he was very funny and nice, and we were also able to connect as he talked about some places he liked in Houston with me.”

Shomik said he was really honored to represent Columbia, especially head-to-head against other schools in the competition. “Our team felt as if we had a strong responsibility to represent Columbia well and add another chapter to its rich history. I hope that we'll be able to make Columbia proud in the finals. Roar, Lion, Roar!”

Shomik’s parents, Sujoy and Romi, in addition to lots of other Houston fans will be rooting for the Columbia team. Who needs to cheer on Peyton Manning when you can cheer on Shomik Ghose?!

Best wishes to the Columbia University team. Tune in for the finals Tues., Sept. 7, 9 p.m.