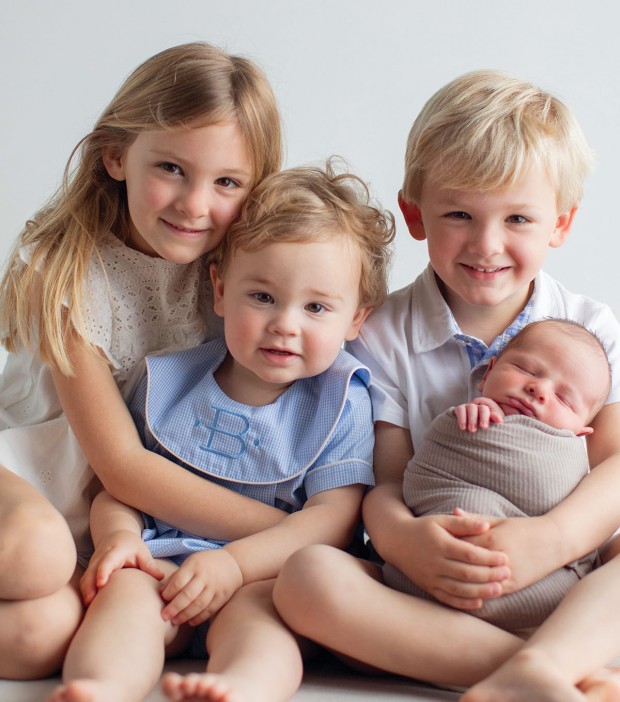 My second-born child, Georgia, now 4, was fighting the labor and delivery nurse during her first bath mere hours after her birth. She literally kicked her. I remember, in my foggy sleep-deprived memory, hearing the nurse say, “Wow, Mom, this one is strong.” Four years later, she is still strong, with that same feisty personality she had only a few hours after birth.

Birth order is considered by researchers and psychotherapists to be one of the most influential components to personalities, along with gender, genetics, temperament, and parenting styles.

Alfred Adler, a 19th- and early 20th-century Austrian psychotherapist, studied birth order and how it affects personalities. He found firstborns to more often be high achievers, leaders, and determined, middle- or second-born children to be more flexible, free-spirited, and competitive, and the youngest to be more charming, outgoing, and persistent.

My husband and I have four children under 7, and, as my second-born showed in the hospital, their personalities are constantly in line with their birth order.

Our oldest in the household are boy-and-girl twins, so while we do not have one oldest child, the twins tend to alternate between taking on the role as the oldest. Cash, 7, tends to be a strong leader for his siblings in our household. He is outspoken and plays tough. He helps with his baby brother, our laid-back, fourth-child Hank, who turns 2 this month. Hank has been dragged to every game, carpool line, and outing, as you can imagine a fourth child would be. I feel that affects his personality in a good, positive way.

Lila, Cash’s twin, is capable. She is always dressed for school on time, makes her own snacks when she is hungry, and has her outfit picked out for school the night before. However, she is also determined. She can spend an entire hour trying to talk us into buying her a concession-stand snow cone at her brother’s games – even after we have said no five times. Meanwhile, Georgia, in her second-born state-of-mind, will be running around the same sports game in a princess costume, with Sharpie marker on her face, unaware of Lila’s relentless requests.

Much to the surprise of their young children, parents were kids once too. They landed in a birth order that shaped their personality as well. Parenting style is often shaped by a parent’s birth order and where they are in the family tree. 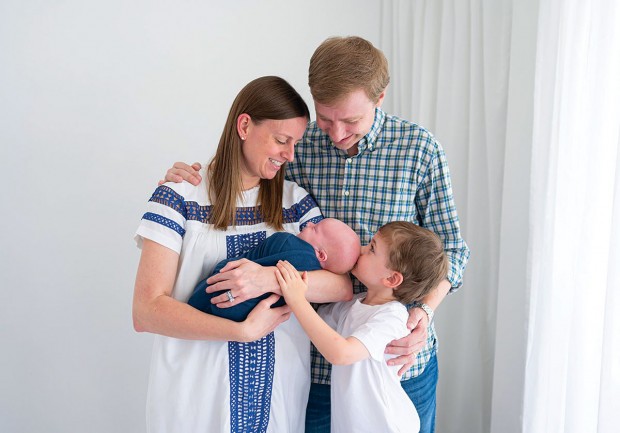 SECOND BORN VS. FIRST Brad and Kelsey Beasley say they are more relaxed as parents with younger baby Jordan, 5 months, than they were with Parker, now 4. (Photo: Sara Stanley Photography)

Mom-of-four and lifestyle photographer Erin Beckwith, the oldest of her own family, agrees that birth order has an impact on personality – she says she sees it daily with her own children. She has four children under 6 years old – Miller, 6; Bennett, 4; Briar, 2; and Bowe, 8 months.

Miller, the oldest and only girl, is the responsible one, the “typical firstborn” child, as she calls her. “She's a little mama already and keeps her brothers in line,” said Erin. “She's helpful, self-motivated, and trustworthy.”

Recently, Erin found Miller up at 6 a.m. with her brother in the living room. She had made herself and her little brother breakfast and turned on a television show for them to watch.

Erin says second-born Bennett, while very sweet, can fall into the role of a typical middle child. She makes sure he does not feel left out and gives him special attention when he needs it. “It's a challenge to parent a middle kid because they're constantly testing boundaries and getting in trouble, but you feel so guilty because they feel like they're always in trouble,” said Erin.

Briar, 2, and his baby brother, Bowe, are definitely “more capable” at this age than the older two were. Perhaps it is due to a more relaxed parenting style and spreading the attention over four.

Mom-of-two Kelsey Beasley, a former teacher and the youngest of her own family, says her parenting style has changed to correspond with the birth order of her own two boys. Parker is 4, and Jordan is 5 months.

She says, so far, the second time around the parenting block is a bit more relaxed for her and her husband Brad. They are feeling more confident, like they know what they are doing. They don’t stress about nap schedules, germs, or milestones. Perhaps as a result, Kelsey says, baby Jordan is falling into a second-born personality, also more relaxed.

“It was very easy to become overly worried [with our first] whenever little issues came up simply because we lacked experience,” said Kelsey. “With our second time, it has been much easier to shrug or laugh off things because we have been down this road before.”