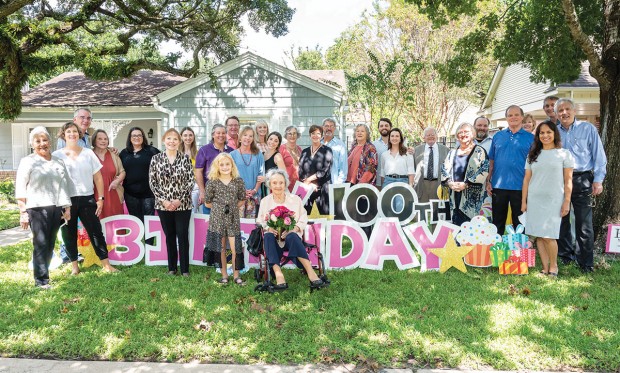 It’s an extraordinary thing to be that quick-witted when you turn 100. But Dorothy Suman has lived an extraordinary life. For almost 70 years, Dorothy was married to the love of her life, Don Suman. You might remember his name: He was a basketball coach at Rice University and the first general manager and vice president of the Houston Oilers.

Dorothy, who moved with her parents to Houston, her mother’s hometown, from New Orleans when she was 2, was an enthusiastic sports fan before she ever met her husband. “In high school, I was a drum major of the Reagan RedCoats, when they were a fine thing to be a part of,” she remembers. (John H. Reagan High School became Houston Heights High School in 2016. The RedCoats are still a school-spirit dance troupe performing at sports events and pep rallies, only now they are called the Heights RedCoats.)

When she started college at Rice, Dorothy went to all the football games. “There were about 800 men and 250 women [in the student body],” she says. “You just waited to choose whoever you wanted to go out with.” 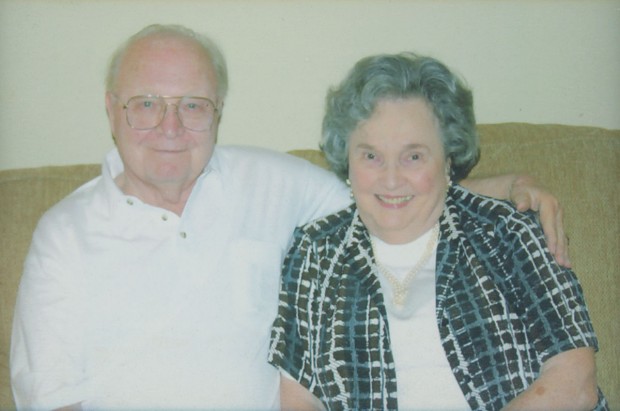 Don and Dorothy Suman met at Rice University and were married almost 70 years.

In this case, Dorothy was the chosen one. “One day I walked in [to Rice’s Cohen House, an event space home to the Rice University Faculty Club], and Don, who was a football player, was playing ping pong with another football player. He stopped and asked his friend, ‘Who is that girl?’” Don thought Dorothy was cute. “Then he said, ‘I’m gonna marry her.’”

Thus began a courtship of several years, while Dorothy lived at home with her parents. “In those days, girls couldn’t live on campus,” she says. “We got married on George Washington’s birthday, Feb. 22, [in] 1945.” Daughter Sharon Suman Dodds was born two years later, followed by son Don Ward Suman, Jr.

When Sharon was a baby, Dorothy and Don moved to West University. “Don and I were driving around one Sunday,” Dorothy remembers. “Sharon was in the car with us, and we drove by this lot for sale. He pulled up and said, ‘I wouldn’t mind living here. Look at all the children Sharon could play with.’ Back then, we weren’t all walled-off. The next day, he went to the realtor’s office and bought it. We started working on plans to build with an architect from Rice, and before long, we had a house.” In 1948, the family moved into the home Dorothy still lives in on Arnold. Today, Sharon lives around the corner with her husband, Tony.

Originally, the Arnold house was a typical West U bungalow. Over the years, it was expanded to deceptively fill the lot, while retaining its original façade. “After Donny was born, I had a baby bed in our room, which people used to do, believe it or not,” Dorothy says. “So we added another bathroom and bedroom, then two dens and a fireplace. You didn’t lock your doors. Kids came in and out of the house. If children wanted to ride their bike six or eight blocks, they did.” 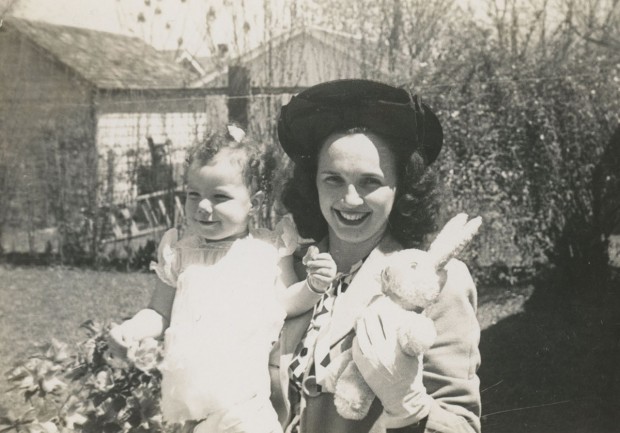 Sharon remembers, “When it got dark, all the dads had a different whistle. My dad would whistle, and we would come home.”

Like many homemakers in the 1950s, Dorothy built her life around her husband and children. And sports.

“Don was the head basketball coach at Rice,” she says, adding that he coached a Southwest Conference championship and that same season coached Rice greats Gene Schwinger and Don Lance to All-American honors. Then, Bud Adams called. “He decided to start the American Football League and asked if Don would join. So my husband was the first vice-president and general manager of the Houston Oilers.”

Dorothy supported her husband. “I went to the games and took the trips,” she says. “We got all kinds of wonderful invitations. The year the Oilers went to Hawaii, maybe it was spring training, I traveled with the team. We were entertained by Barron Hilton – he owned the Hilton. He had us to his home.”

Sharon remembers being chased by reporters: “They thought they could ask kids information the adults wouldn’t give them, but we outran them.”

Sitting in the living room she grew up in (which is pristine, thanks to Dorothy and a little help), Sharon says, “I remember Dad working on that dining room table with Bud Adams on the phone and papers spread out. Donny has the American Football League championship ring. There’s also a Cotton Bowl watch around here somewhere.” 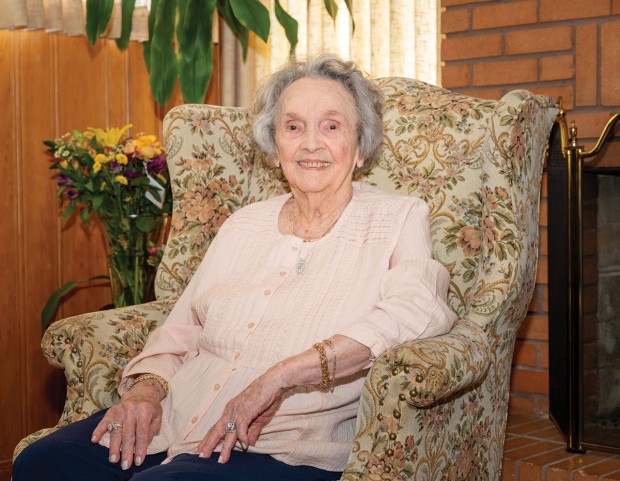 “I never worked,” Dorothy says. “What always tickled me was that everybody knew Don. I’d be standing there beside him and wouldn’t know them. He told me, ‘If I know who I’m talking to, I will introduce you. But if not, you just step back.’”

Sadly, Don passed away in 2015. Dorothy has one grandson, Flynn Dodds, and a great-granddaughter Stella. “She’s only eight years old,” Dorothy says. “She’s smart as a whip. But, of course, all grandchildren are smart. You know that.”

On Oct. 3, Dorothy’s family came together at her house on Arnold to celebrate her 100th birthday. For weeks, Dorothy was polishing silver, dusting, even cleaning the walls of her home. When the day arrived, she was surprised by a giant yard sign, courtesy of her children, and a birthday serenade from the West University Place Fire Department.

“The fire truck and ambulance came driving up with their sirens on to sing to Mom,” Sharon says, “at the same time her doctor arrived!” Dr. Sarah Selleck, on her way to celebrate with Dorothy, was startled by the sirens and went running to the door to be sure everything was okay.

Sharon had, in fact, been concerned when she arranged the firefighters' visit that their mom, who had been a bit stressed out about the party, would "keel over" at the surprise. But brother Don thought she would love it and said, “Let’s do it.” 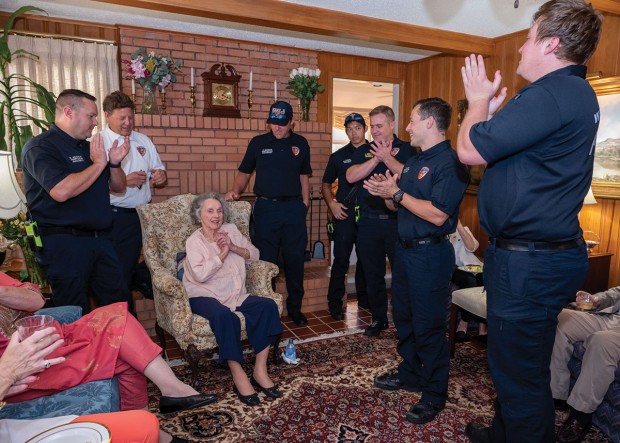 The West University Fire Department sings a surprise birthday serenade to Dorothy Suman in the West U home she has lived in for 70 years. (Photo: Dee Zunker)

When the firefighters burst in, Dorothy’s first thought was that they were going to arrest her, until her daughter reminded her, laughing, that firefighters don’t arrest people.

The birthday girl ended up having a great time. "She was animated and had no problem being the center of attention. She came to party. She kept everyone in stitches."

And when asked the secret to looking so young, Dorothy had an answer ready.