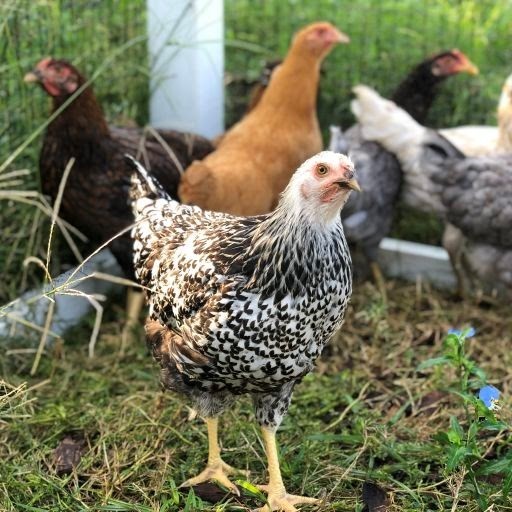 The chickens enjoying their new home with the Rams. (Photo: Gwen Cario)

Why did the chicken cross the campus? This year, the Awty International School has added a chicken coop and adopted several chickens to help reduce the amount of waste on campus. The new chicken coop serves a number of purposes, such as eliminating food waste from school lunches, reducing the amount of greenhouse gas emissions, and fertilizing the Awty garden. Leftover food scraps are collected in bins each day to become a food resource for the cage-free chickens. In addition to helping educate the campus on environmentalism, the coop has become a fun site for students and staff to enjoy while walking to class.

The idea of building a chicken coop at school was brought up by Mr. Olivier Logette, one of Awty’s secondary science teacher, and Ms. Kristi Cigdemoglu, Director of Experiential Education. Over the past few years, they have both witnessed the tremendous amount of leftovers from school lunches. This food waste normally ends up in landfills, which pollutes the planet. Their concerns on the issue of wasting food led to the idea of building an on-campus chicken coop.

The original intent of the coop was to repurpose the leftover scraps to feed the chickens, while their organic eggs could be served in the Awty lunches. The idea later evolved from reducing food waste on campus into solving more environmental issues at the school.

Mr. Logette explained, “Compared to a factory farm, coop-raised chickens produce a fraction of the manure in a much smaller footprint. Therefore, the chickens’ waste can be handled properly, returning it to the environment in an eco-conscious manner”.

“If the coop is kept well, there will be little to no odor, and the birds will be happier and healthier," continued Mr. Logette.

After presenting the project to the Awty Board of Trustees, the construction of the chicken coop was approved in May 2021. By the end of August, the chicken coop was completed, and six chickens welcomed everyone back to school. The coop is currently located next door to the environmental office, so it has a green eye on it at all times! However, plans are being made for it to be moved because of ongoing school renovations.

"The coop should be placed in a location with little congestion to best protect the chickens," suggested Mr. Logette. As of today, the coop has grown to house ten chickens. During school breaks and free periods, teachers and the Awty management team supervise the facility.

Since its inception, the coop has served as a model to students on how to incorporate environmentalism into their daily lives. Although the addition of a chicken coop may be a small step in addressing a very large problem, the Awty community is now more aware of food waste and its great impact on our environment. With the help of our egg-cellent new friends, we are only at the beginning of our environmental journey at Awty!