That elf on that shelf 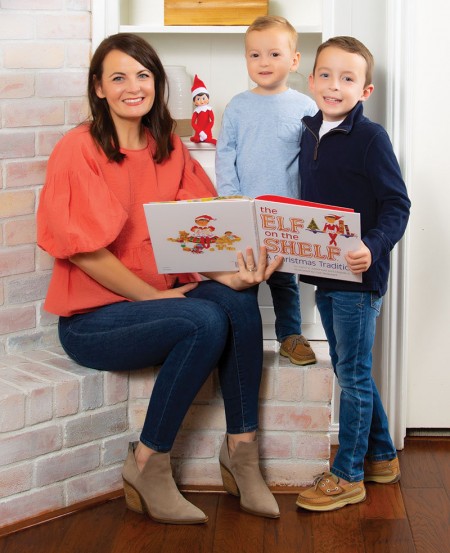 WHERE DID SHE GO? Austin, 2, and Jackson Morgan, 6, look for their family’s elf, Sophie Marshall, every morning in December. Mom Rebecca says Sophie Marshall has been showing up ever since Jackson was 3. (Photo: lawellphoto.com)

An elf that flies into people’s homes from the North Pole each night has become a treasured tradition in many families. It all started sometime after 2005, which is when the children’s picture book The Elf on the Shelf, by Carol Aebersold and her daughter Chanda Bell, came out.

According to the book, the little elf magically appears inside homes each morning in December to watch over the kids, check in from Santa’s headquarters, and keep an eye on the children.

These elves collect important data for the naughty and nice list. There are a few important rules, according to the book – the family needs to give the elf a name and cannot touch the elf, or else its magic will disappear.

The Eggleston family is familiar with this elf. In the early hours, each day in December, the elf with round blue eyes, a smirk, a hard head, and soft stuffed body awaits two sleeping children. His name is Bubba, and he can be found in a different scenario each morning – from dangling from the chandelier to getting into the candy cane stash.

The Eggleston kids, Wyatt, 7, and Berkeley, 5, have been waking each morning in December to find Bubba since Wyatt was 3 years old.

Wyatt and Berkeley’s mom, Elizabeth Eggleston, is a fifth-grade teacher at Frostwood Elementary School. Back in 2015, Elizabeth said an elf visited her classroom. “I had just as much fun with it as my students did,” she said, laughing. She said the elf would scan the classroom to check the elementary-school kids’ behavior.

Every morning leading up until Christmas Day, Wyatt and Berkeley wait at the bottom of the stairs together in their pajamas until they are given the green light by their mom or dad to go locate Bubba in their house.

Over the years, Bubba has gotten highly creative. He even keeps up with their family’s daily routines. “Sometimes, he brings goodies for the kids. When the kids find him, they scream,” said Elizabeth. “If we are going on a family sleigh ride, he might bring hot-cocoa fixings. If there is a big football game, he will dress the part. He loves Taco Tuesdays.”

One morning last year, Bubba brought superhero figurines for the kids – Batman and Captain America for Wyatt and Wonder Woman for Berkeley. The kids ran in to find the superheroes suspended from the ceiling.

He also brings Christmas books. Last year, he dropped off The Gingerbread Pirates. “He left all of the goodies to make our own gingerbread men that weekend,” said Elizabeth. Berkeley and Wyatt love to talk with their friends about the elf every day. 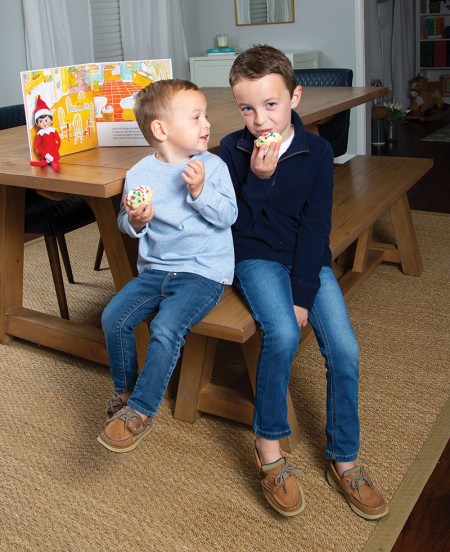 WHERE DID SHE GO? Austin, 2, and Jackson Morgan, 6, look for their family’s elf, Sophie Marshall, every morning in December. Mom Rebecca says Sophie Marshall has been showing up ever since Jackson was 3. (Photo: lawellphoto.com)

Rebecca picked up the book when Jackson was 3. Jackson decided to name their elf Sophie Marshall after his favorite character from the television show Paw Patrol, Marshall.

Sophie Marshall arrives at the Morgan home on the first day of December and leaves 24-day Christmas Advent calendars for each of the boys. “Each morning, she is in a new place,” said Rebecca. “With a toddler in the family, she is usually somewhere out of reach.”

Sophie Marshall has been on high shelves, the mantle, perched on wreaths, and hanging upside down on the fireplace. “Jackson loves to run around the house and be the first to spot her,” said Rebecca.

Last year, Jackson became concerned that Sophie Marshall was hungry on her long travels from the North Pole. “He wanted to give her a snack, but he knew he couldn’t touch her, or she might lose her magic,” said Rebecca. “We decided to leave a cookie close to her, leave the room so she could move, and come back to see if she ate it.”

Rebecca had Jackson and Austin wait in their rooms, and she set a 5-minute timer. When the time was up, the boys ran to find a small bite missing from the cookie. “Jackson was so excited that she ate some of the cookie. The next day she brought a thank-you note.”

In some families, the elf now has competition during other holidays. For Easter, there is the “Peep on a Perch.” And for Halloween, the “Switch Witch.” An extra set of eyes on the kids is always helpful. 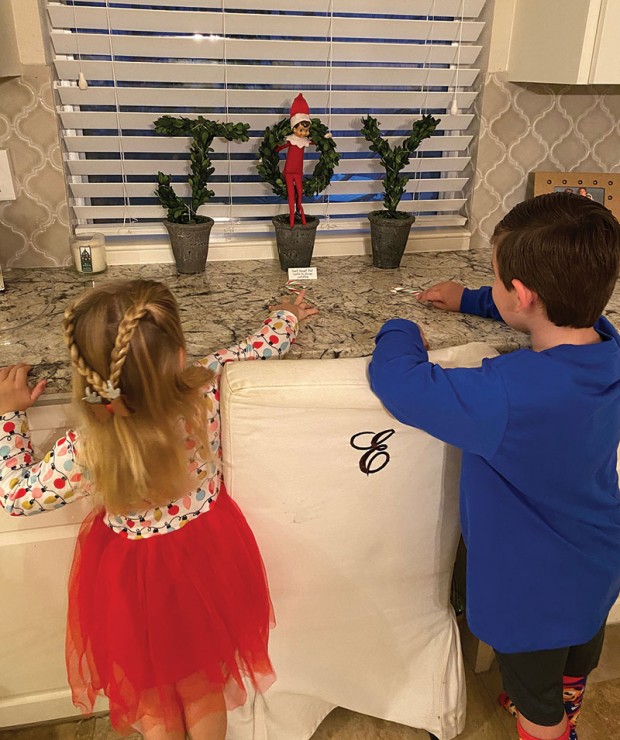 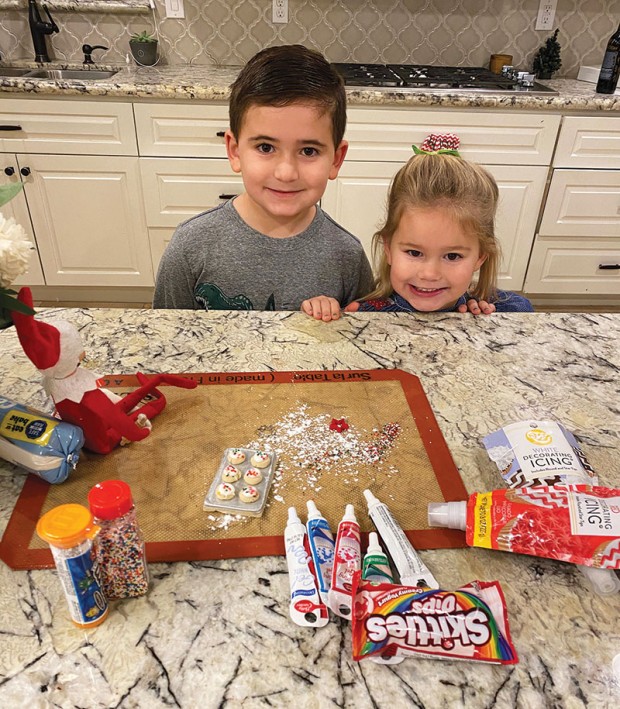 LITTLE FAMILY HELPER From Taco Tuesday to cookie making, the Eggleston family’s elf, named Bubba, gets creative with his visits to Wyatt, 7, and Berkeley, 5. 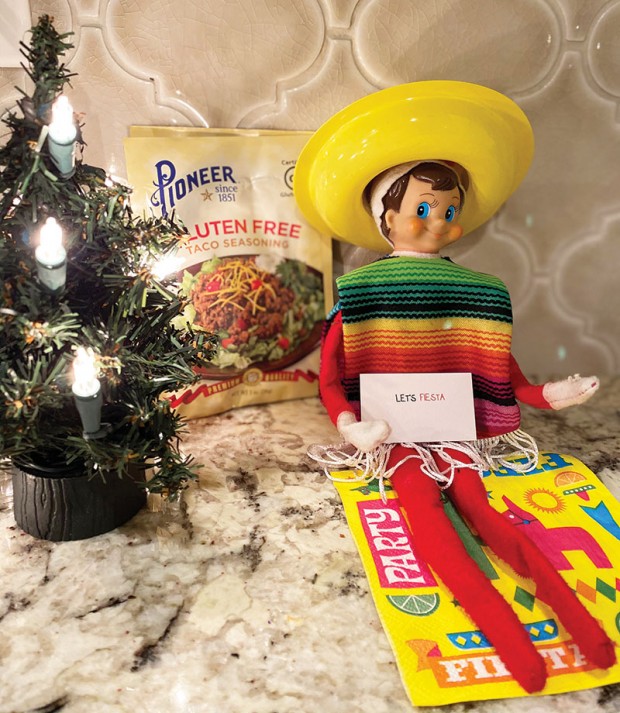 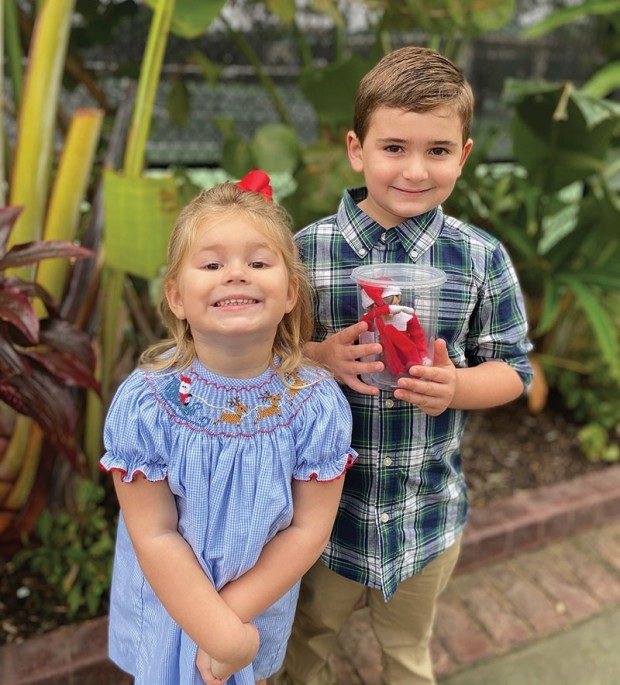 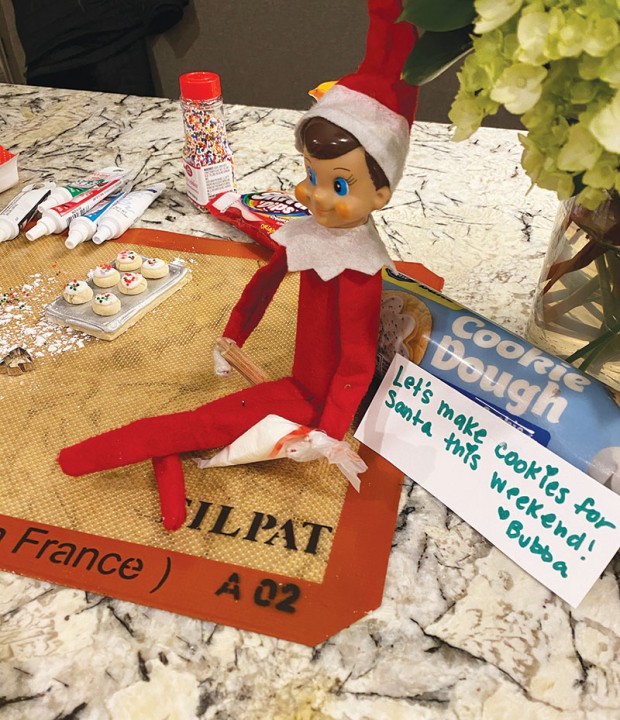 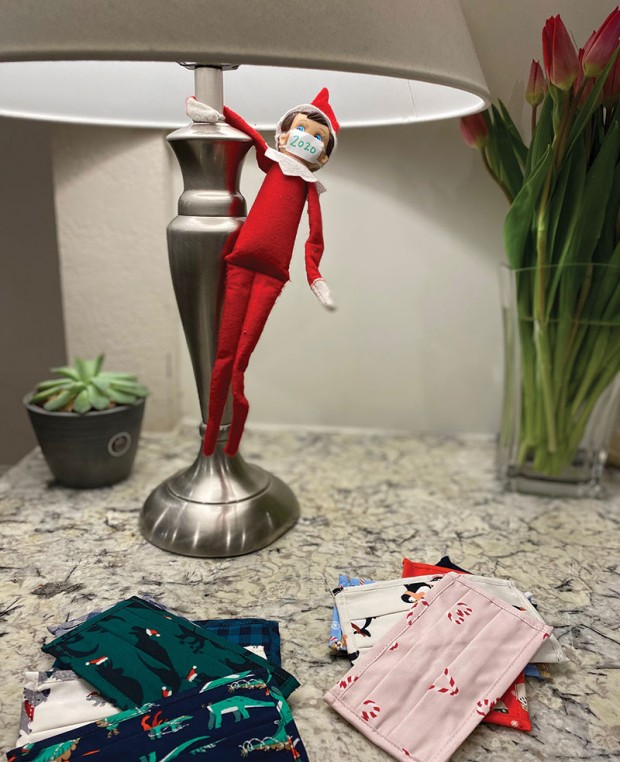