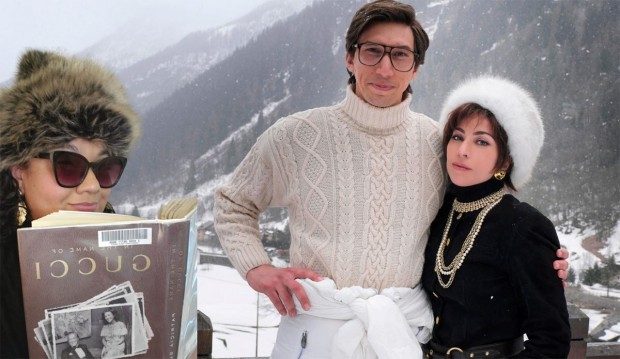 I have been excited for House of Gucci since it was reported that Lady Gaga and Adam Driver would lead the film. Being a fan of the film’s lead actors and true crime stories, I immediately checked out the book that inspired the film to learn more about the crime that shook the fashion world.

The House of Gucci by Sara Gay Forden is a gripping book that takes readers through the history of Gucci. From founder Guccio Gucci’s venture into leather goods to the successful expansion of the Gucci company. Success that brought fortune and power to the Gucci name, causing years of power struggles within the family as they tangled themselves with legal troubles, tax schemes, and financial ruin. Amid all the fashion and family war, the book details the relationship between Gucci heir Maurizio Gucci and social climber Patrizi Reggiani from their passionate beginning to their toxic end.

I have a few more books that explore feuding dynasties, killer styles and the women who would die to risk it all.

Empire of Pain: The Secret History of the Sackler Dynasty by Patrick Radden Keefe. Empire of Pain follows the rise of the Sackler family, whose billion-dollar fortune built from selling the painkiller Valim and their eventual ruin from the greed that caused family conflicts and made them indifferent to the millions addicted to OxyContin.

When Oscar de la Renta first coined the term “fashion victim” he used it to describe a person who is unable to recognize style, falling victim to short-lived fads and materialism, but I’m taking that term and looking at people that were literally fashion victims. People have gone to extremities to be fashionable, even if it killed them, as seen in Killer Fashion: Poisonous Petticoats, Strangulating Scarves, and Other Deadly Garments Throughout History by Jennifer Wright. A truly entertaining read about deadly fads like applying radium to flapper dresses, collars that choked wearers to death, and other deadly fashion trends that cause readers to face palm.

Driven to madness and out for revenge, Patrizia Reggiani hired a hitman to kill her ex-husband Maurizio Gucci. In a recent interview, Lady Gaga had this to say about playing the infamous Black Widow, "I don't believe in the glorification of murder. I do believe in the empowerment of women." I couldn’t agree more, Gaga, so check out Diamond Doris: The True Story of the World's Most Notorious Jewel Thief by Doris Payne. Diamond Doris is an entertaining memoir of a bold and glamourous woman that made a career in pulling off diamond heists, refusing to be defined by society’s prejudices. In later years, Doris had this to say of her numerous heists that eventually led to her arrest: "It beat being a teacher or a maid.”

Interested in more House of Gucci read-a-likes? We’ve created a special list of eBooks, audiobooks and more like House of Gucci, including the ones listed here.