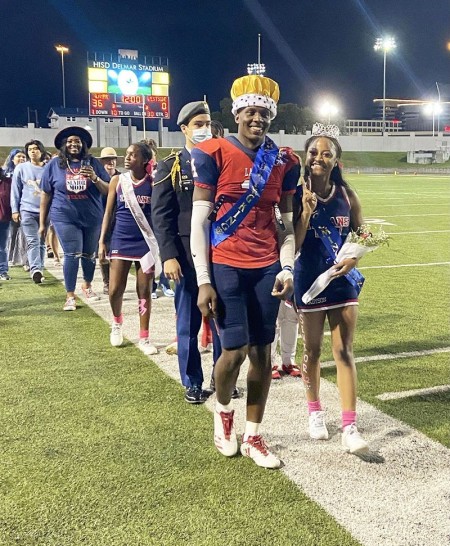 Everyone was in high spirits due for Lamar’s annual Homecoming game dur to Lamar’s victory over Westside High School. However, it was an extra special night for two students.

As tradition goes, two people are crowned Homecoming King and Queen, and this year was no different.

“When I heard my name called, I literally cried. My dad and I were in shock, but it was one of my best moments of high school. Everyone was screaming and chanting my name as I went to get the crown,” she said. “I could honestly relive that moment numerous times.”

McCloud, a senior at Lamar, has been dreaming of this moment for many years.

“I have wanted to run since freshman year, but I never had the courage to. I finally worked up myself to do it in my last year of high school,” McCloud said.

This special occasion has greatly impacted McCloud’s high school experience, as she has had the opportunity to meet a wide variety of Lamar students.

“Running for Homecoming Queen has completely opened my friend circle and has made me more social. During the whole campaigning process, I was able to meet so many new people that I would never have met on my own,” she said.

To Madyson, being Homecoming Queen means many things, but above all it represents unity.

“Since Homecoming is all about school spirit and unity, I believe that being Homecoming Queen means that I am someone the student body feels best symbolizes that within their school.”

McCloud has had an eye-opening experience at Lamar as she has learned things that will help her for the rest of her life. She has many ambitious plans for after high school.

“I plan to attend either A&M or UT in the fall. I want to attend dental school so that I can become a certified dental assistant,” she said.

Crowned alongside McCloud was Kobe Jones as King.

“I felt really great knowing that I am so liked among my classmates,” Jones said.

Jones, a senior this year, decided that this was the year to run.

“I just thought that since it was my senior year, I might as well run since I did not do much stuff like that throughout the years,” he said.

Much like the Queen, being on Homecoming court has greatly impacted Jones’ high school experience.

“This just topped off my experience at Lamar because I already enjoyed my years at the school and this just made it even better,” Jones said.

Jones has had an unforgettable time at Lamar as it has given him the opportunity to make special connections and friendships, many of which are his teammates on the football team, a passion he hopes to pursue in the future.

“After high school, I plan on following my football path and studying finance in college,” he said.

Homecoming hailed two very worthy winners and students at Lamar are so proud of their King and Queen.