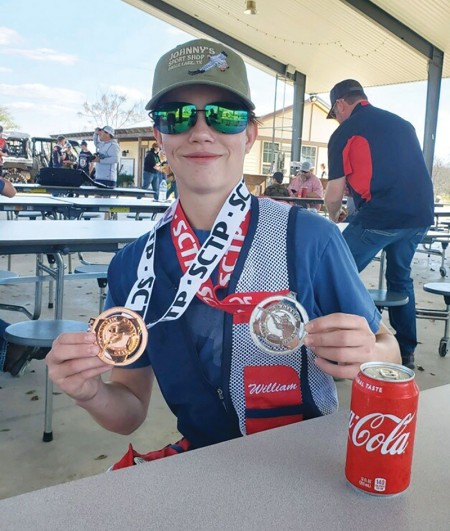 When I was 10 years old, I became interested in target shooting with my dad. I learned to shoot with an over and under 20-gauge shotgun. After telling my cousin Gage Fowlkes of my interest, he suggested I join him on the Katy Dusters shooting team. Katy Dusters Sportsman’s Club is a non-profit, team-based, youth-development program that uses shotgun sports to instill life skills such as discipline, safety, teamwork, ethics, and self-confidence.

Under the eye of certified shotgun coaches and qualified volunteer parents, we have shooting practice at locations around the Greater Houston area. I found that I really enjoyed the sport and the people.

Part of the team activities are competitions that include sporting clays, trap, and skeet shooting. Most competitions I have attended have been in Texas, with one large competition in Ohio, where I competed in the Scholastic Clay Target Program National Championship. In the competitions I’ve participated in, I've won several prizes, including belt buckles, medallions, and even money, which has added to the fun!

One great adventure this past year was a hunt with my dad at our friend’s ranch in south Texas – the Hall of Fame White Tails Ranch in San Diego, Texas. We were looking for a certain buck that had not been sighted for a few months.

When we were in the stand the next morning waiting for sunup, we saw several does and one other buck. Finally, we saw the buck we were after. He was after a doe and disappeared back into the woods. I saw him again, sighted him in, and took my shot. After loading him in the buggy, we took him to Freer to have him measured and weighed. My score was 191 in the Muy Grande competition. After the competition was completed at the end of the season, I went back to Freer to claim my Muy Grande trophy.

Recently my younger sister, Caroline, has become interested in shooting competitions and has already placed in some. Both of us enjoy the competitive nature and discipline that we must have in order to succeed. We also enjoy the involvement of our family – all three generations!

10:00 am to 4:00 pm
Location:
The Heritage Society
END_OF_DOCUMENT_TOKEN_TO_BE_REPLACED