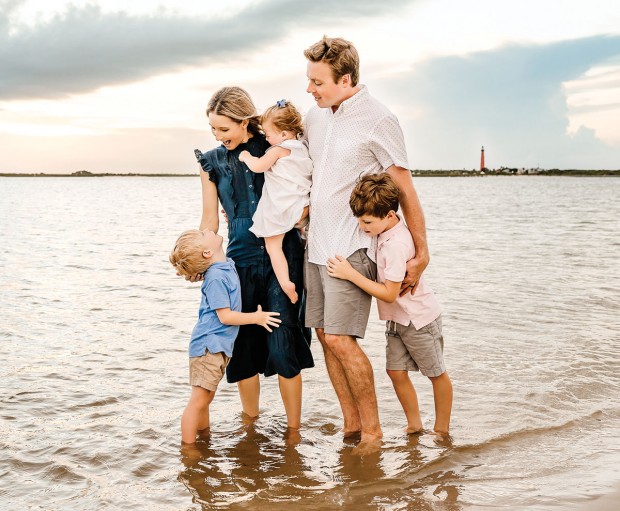 SO CUTE Warren, 8, Austin, 5, and Lila Tompkins, 2, (pictured with mom and dad Alli and Clay) had different first words as babies. Warren said “Dutch” for Duchess the dog. Austin’s were “woof” and “buh-buh,” for his brother. Lila’s was “dada.” (Photo: Alli Tompkins Photography)

Most children speak their first words between 10 to 14 months. By 1, a child usually has a tiny vocabulary bank with a few commonly heard words like mama, dada, bye, or dog.

For parents, hearing sounds beyond babbles, coos, and cries is a sweet treat after Old McDonald Had a Farm on repeat in the car. And it’s exciting to listen to their personalities take shape. Sometimes the almost-words are the best, even if they take a while to figure out.

One Buzz mom recently was in her kitchen while her 11-month-old daughter listened to music. The bluetooth speaker on the counter rang out with the popular children’s song lyrics, “Mother duck said, ‘Quack-quack-quack-quack.’” Moments later, her baby said something that sounded like “Cack.” Mom finally realized she was trying to say quack.

Mom-of-three Erin Dickerman, who has three kids under the age of 5, says “no” was one of the first words for all three of her kids, with mama and dada as a near tie. Her oldest son, Spencer, now 5, would go around saying, “No, no, no!”

Spencer is big brother to their 3-year-old twins, Crosby and Lucy. Erin says her favorite part of watching her children learn to say their first words is the way they pronounce their own names and their siblings’ names. “Spencer called himself ‘Sapo’ forever, and it was so cute,” said Erin.

Alli Tompkins, a lifestyle photographer, and her husband Clay, a consultant, have enjoyed some funny moments with each of their three kids learning to speak.

Warren, 8, Austin, 5, and Lila, 2, had different first words. Warren said “Dutch” for Duchess, the family dog. “He used to call her from other rooms, then would laugh when she would come in,” said Alli. Among Austin’s first words was “woof.” He also loved calling for his brother: “Buh-buh!” Lila’s first word was “dada” – just like Alli’s when she was a little girl. (Clay’s first word was ball, which Alli says is fitting because he still loves baseball.)

Alli says one of her most memorable first-word moments was with Austin, and she has it on video. “I was asking him what sounds different animals make,” said Alli. “The first I asked was cat, [and] he answered with a perfect ‘meow.’ Then, every subsequent animal, like dog, chicken, snake, bear, duck, was also ‘meow.’”

When kids learn to speak, sometimes the words don’t quite get there. The attempts can stick in the vocabulary – an inside joke within a family. Alli called hamburgers “hamagurbers” when she was young, and the word is still a favorite.

“I love all the cute things kids say when they’re learning to talk,” said Alli. She says Warren has brought the Tompkins family words like soupcase (for suitcase) and chee chees (for Cheerios). Austin has brought the word redults (for adults) and huh-cause (for because).

Lila, who just turned 2, is also bringing some innovative words to the Tompkins’ vernacular. She’s added see-sauce (for apple sauce) and nee-na (for banana), and she has nicknamed her brothers Dubbie and Auggie.

Editor’s note: Want to share the funny or memorable early words of the babies in your life? Email us at [email protected], and your sweet memories could end up in our Mailbag column.