Every morning, 10 minutes at a time 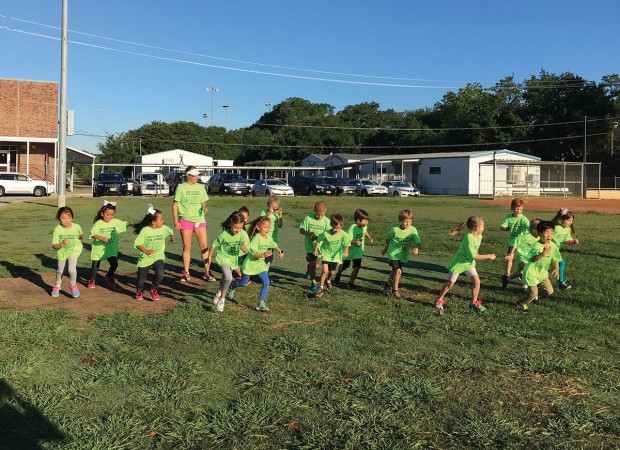 WE CAN DO IT Jen Levy's fourth-grade class runs for 10 minutes every morning, adding up to a marathon distance over time.

Jen Levy, a beloved fourth grade teacher at West University Elementary, has given new meaning to “shaking the sillies out.”

For the past 10 years, she has motivated her students, some 300 of them in all, to run entire marathons in the 10 minutes before class starts.

Ms. Levy’s Lonestars earn medals, T-shirts, and goodie bags when they finish, just like official marathoners. Most of all, though, they learn to cheer for each other, and for themselves.

“It started when I was [teaching kindergarten] at Briargrove [Elementary],” Levy says. “I was running a marathon and kept talking about it to my kids. As I was doing it, I realized the benefits to getting your brain started every morning and getting out energy. So after the marathon, I ran the outside of the Briargrove playground and found it was one-tenth of a mile around.”

That was the beginning of the Lonestar Marathon Club. Levy began taking her students outside first thing every morning, letting them run at their own pace. She organized the club at Briargrove for two years and brought it with her to West U, where she’s taught for the past six.

“I take them out a couple days after school starts,” she says. “They all sign a permission slip, and I show them the route, which is around the perimeter of a field at West U. We have a whole conversation that you run for yourself, no one else. You’re not pushing anyone out of the way, you’re always cheering people on. You can walk, run, jog, whatever you want.”

Levy keeps track of everyone’s progress, which they chart daily on a colorful graph starting at 0.1 miles and ending at 26.2.

“It is a great way for them to set a goal and work toward it,” she says.

Caroline Horowitz, a talkative West U fourth-grader, completed her marathon in December. “I mean, at the beginning it’s kind of hard, but then the more you run, it’s not as hard,” she says, “and it’s really fun. Even if you don’t get that many laps, it feels really good to be running. Every day you get closer to your marathon. Also when you’re getting your marathon, Ms. Levy will be like, ‘Go, go,’ and it makes you feel really proud.”

Levy says she watches self-esteem improve as kids who once said, “I can’t run,” learn that they can do what they set their minds to. “They get out the wiggles, achieve a goal, get endorphins in the morning, and they learn they can do it,” she says.

She can commiserate with kids who start out thinking they can’t. “If I was in fourth grade and had to do this I would have been miserable,” she says, laughing. “I was not an athlete. I took dance and was not that great!”

But running has changed her. “When I first started, by mile six, I was like, ‘No way can I do 20 more miles!’ But it’s all a mind game that you conquer. I have seen so much progress, and that’s just all me doing it. It sounds clichéd, but running has given me more confidence, and that’s all I wanted was for the kids to have confidence.” Levy has now run 10 marathons and 15 or so half-marathons.

Her favorite part of a marathon, she says, is crossing the finish line, hearing people cheer. “My kids get that cheering and high-fiving for 10 full minutes every morning. All day long, all I do is tell them things to do, but for those 10 minutes we’re all cheering together.”

Erica Smith’s son Beau was in both Ms. Levy’s kindergarten and fourth-grade classes. “The marathon was one of my most special parts of elementary,” she says. “It’s awesome to see the whole class celebrate when one of them jumps the finish line and Ms. Levy takes a mid-air picture.” Beau, now in fifth grade at First Baptist, says being a Lonestar made him faster for baseball and football, which he now plays. “And I like to run in the morning before school now,” he says, sharing that he loves to run around the block.

That feeling of accomplishment is what Levy is after. “Whether they are the first or last one to get their marathon,” she says, “the pride in their faces always makes me want to cry.” Happy tears, obviously.