The Village School Theatre Department presents War of the Worlds 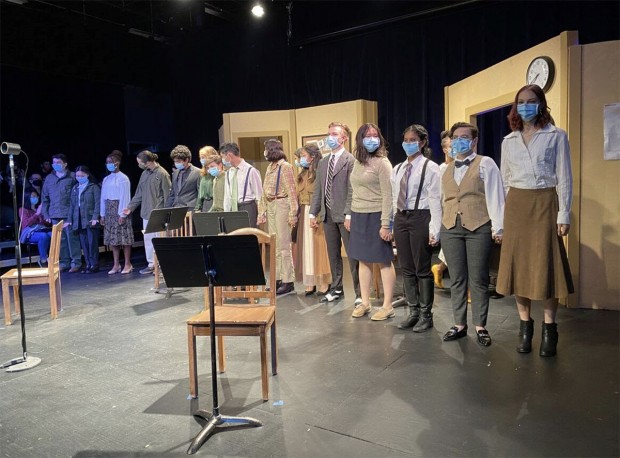 Pictured is the cast and crew of the play bowing at the end of the play in the Black Box theater.

The Village High School theatre department put on a show unlike any other, performing War of the Worlds for a Village crowd to enjoy in the Black Box theatre.

The plot follows an American dockworker who is forced to look after his children, from whom he lives separately, as he struggles to protect them and reunite them with their mother when extraterrestrials invade the Earth and devastate cities with giant war machines.

“The play was an absolutely wonderful work of theater,” said junior Kahani Malhotra, an audience member who enjoyed the play on Friday night. “All the actors were fantastic in their roles, and the crew did a remarkable job bringing this 20th-century mock dystopia to life. All around this was a spectacular show, made even more special as it was the first one at Village since COVID-19.”

The play was challenging to depict visually, especially since it is sci-fi but the set designers did not fail to impress, even considering this is the school’s first major theater production of the year. However, at the end of the day, War of the Worlds was an experience enriched with growth, confidence, and stage experience for its actors.

Not only did the cast put unbelievable effort into rehearsing the show, but the tech crew also put in time after school for several weeks to ensure the lights and sound of the show were enhancing and adding to the work of the actors.

“Being on tech is like being in one big family,” said junior Anjai Gupta, a member of the show’s tech department. “For one whole week (tech week), we're with each other every single day of the week for 4 hours. Personally, I love managing lights - theatre is a cathartic and artistic way to express yourself.”