Falcon Theater is 'Never Fully Dressed Without a Smile' 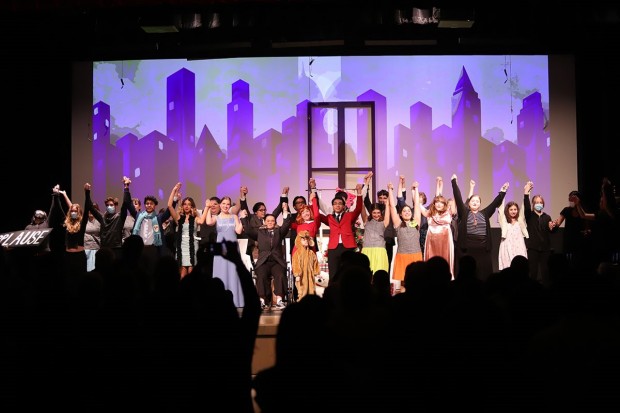 The whole cast and crew after the last scene of the final night of production.

Directed by Katie Macalouso, The Falcon Theater’s fall production of “Annie” was this past weekend. The iconic story based in New York City was beautifully portrayed by our own cast and crew from IWA and St. Thomas.

From the opening number, “Maybe” to closing curtain with “A New Deal for Christmas,” the Falcons - with some Eagles - put forth all their best energy and totally paid off seen on opening night. The star, Annie, played by Flinn Burrell '24, is an optimistic orphan who lives for her friends at Miss Hannigan’s orphanage. When Annie gets the opportunity to spend the Christmas holidays at a millionaire's home, played by Aidan Nanquil STHS ‘23, she teaches Oliver Warbucks that there is more to life than money and gain, especially in the 1920s.

A fan-favorite moment in the show was when Angel Marie Morfin, or Sandy the stray pup, crawled out on stage to accompany Annie when she first snuck out of the orphanage. “Easy Street” is a tribute to the economics and financial life during the Great Depression. With Ms. Macalouso’s choreography, the trio of Miss Hannigan, Rooster, and Lily St. James all whirl around in the orphanage after Hannigan shoos the girls away, of course. 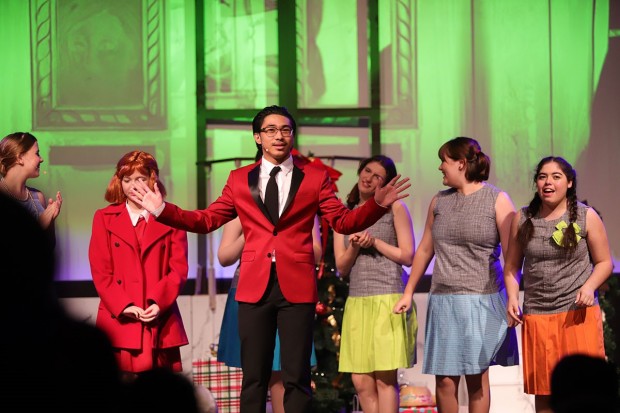 When Annie and Warbucks belted “I Don’t Need Anything But You” in the second act, “Flinn and Aidan have that very dynamic bond that everyone could tell their emotions through their iconic dance moves,” said Nanea White ‘23, reminiscing about crucial points in the play that she loved.

The lead being a sophomore, Flinn Burrell ‘24, amazed the house in her red wig and half locket necklace courtesy of Emily Quinn ‘22 and Julia Bonds ‘25. Miss Hannigan’s cardigans and midi skirts were also outstanding . Other than costumes, the makeup team really showed up with Miss Hannigan, played by Claire Garcia ‘22.

Needless to say, the set, props, and tech team were some of the best I have ever seen in Falcon Theater. The set of the production was built all by students and the stagehands were quick with their set changes. When the audience was first introduced to the Warbucks Mansion, it was bright and luxurious while the detail in the stairs added to the idea that he was wealthy at the time of the Depression.

By the time all the actors were on stage bowing to the crowd, everyone was smiling that opening night was a packed house.