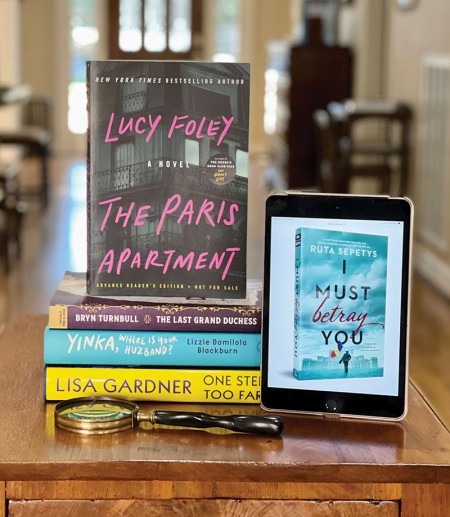 WHAT TO READ This month's books include two edge-of-your seat thrillers, a historical thriller set in Romania, a fun vacation read, and a must-read historical fiction title centered around the Romanovs’ oldest daughter, Olga.

I Must Betray You by Ruta Sepetys – This historical thriller is set during the time period leading up to Romania’s 1989 revolution and the ousting of its charismatic but brutal leader, Nicolae Ceausescu. Insulated and living in constant fear, Romanians must survive under the oppressive regime that governs their country. There is little food, the electricity is randomly turned off and on, no outside media is allowed, and everyone worries about who they can trust and who they cannot; even family members are suspect. Sepetys vividly depicts life there during this time period, a period many will be unfamiliar with, and how one man managed to fool the world for far too long. I have not stopped thinking about this book since I finished it, and it will definitely be one of my top reads of the year; it is truly stunning.

The Last Grand Duchess by Bryn Turnbull  – Grand Duchess Olga Romanov was the oldest daughter of Tsar Nicholas II, and this historical fiction novel, The Last Grand Duchess, tells her lesser-known story. Brought up at the glittering Alexander Palace, Olga and her sisters are sheltered from the world around them. When war breaks out, the sisters work as nurses tending to Russian officers, but tensions in Russia begin to build as a revolution threatens to topple three centuries of Romanov rule. The Last Grand Duchess delves into the buildup to the Romanovs’ demise, the numerous factors that contributed, and what life was like for them as their world closed in around them, while breathing life into the family, particularly the children who were punished for the behavior of their out-of-touch parents. I learned so much as I read this gripping account of the buildup to the Romanovs’ execution; this book is a must read for anyone interested in history.

One Step Too Far by Lisa Gardner – This second installment in Gardner’s new series starring cold-case solver Frankie Elkin is a page-turner from the beginning. Recovering alcoholic Elkin seeks out cases around the country that have been abandoned by officials and works to help to solve them. In One Step Too Far, Elkin turns her attention to the disappearance of Tim O’Day five years earlier while on a camping trip with friends in a remote area of a national forest in Wyoming. She joins the fifth-anniversary search party and heads out into the rugged wild, quickly realizing that almost everyone in the search party is hiding something. Gardner’s choice of setting makes this book and creates an almost constant feeling of dread as Elkin works to understand what happened to Tim O’Day and why. This book kept me on the edge of my seat the entire time I was reading it.

The Paris Apartment by Lucy Foley –  This atmospheric thriller takes place in a creepy, once-elegant apartment building in Paris where secrets lie just below the surface. As the book opens, Jess escapes a bad situation in England and flees to Paris to stay with her half-brother Ben, but when she arrives, Ben is gone. Bewildered by his absence since they had texted the day before, she approaches the other residents to inquire about Ben but quickly realizes that no one wants her there, nor do any of them want to talk about her brother. Foley combines clever twists and turns, a fantastic setting, and a satisfying ending to create a thriller that you will not want to miss.

Yinka, Where Is Your Huzband? by Lizzie Damilola Blackburn – Yinka is a British-Nigerian woman who was educated at Oxford and who enjoys the life she is currently living. However, her mother and aunties are forever obsessed with her love life and why she is not married yet, a topic they raise at every family gathering. Yinka is a likable, funny heroine, and readers will root for her as she tries to bridge the gap between two cultures and find her own way amid familial pressure. I particularly enjoyed the glimpse into the British Nigerian community: their customs, food, and culture. Yinka, Where Is Your Huzband? is a light, engaging read with an entertaining cast of characters and a maverick protagonist, the perfect choice for a vacation.

10:00 am to 4:00 pm
Location:
The Heritage Society
END_OF_DOCUMENT_TOKEN_TO_BE_REPLACED