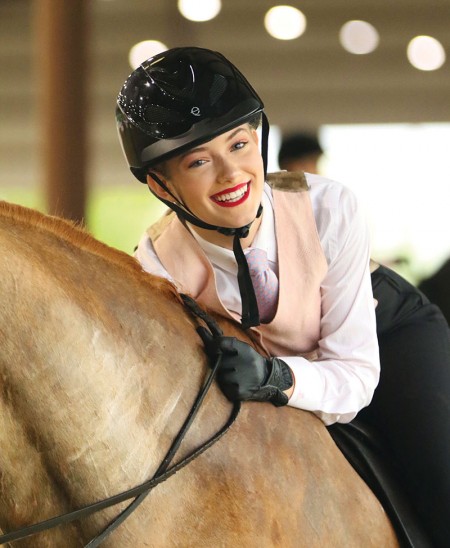 GOT GAME Sophie Perwien, a junior at Xavier Academy, says a challenging horse taught her confidence and persistence, both inside and outside of the riding arena. (Photo: Murphy McSemek)

Some of my earliest memories, at age 3 or 4, are of being paraded around a bright show arena on a lesson horse named Citibank. Even though everyone won a blue ribbon, these “leadline” classes sparked what would become a lifelong love for horses.

I am thankful to have grown up in a horse-loving family. My grandfather opened a Saddlebred farm, named Bluebonnet Farm, just west of Katy in the early 1980s. I grew up frequenting local horse shows, such as the Pin Oak Charity Horse Show, and various shows put on by the Texas American Saddle Horse Association. By 2016 I began showing competitively.

This past season I was lucky enough to be able to show on my grandfather’s horse, iPod. Despite being absolutely lovable, iPod has his quirks. He has to be the most stubborn horse in the barn, and building his trust was a challenge. iPod requires a rider with a lot of confidence, which is something I didn’t have at first. Without firm guidance, he would become anxious and start doing some not-so-pleasant things, like kicking and bucking. I had to become confident in myself and my riding skills to be able to work with him. I had to show him that I was on his side, and we could work together as a team, not as enemies.

iPod has shown me that persistence is important. Every bad lesson made me ready to come back and work harder next time. I learned how to listen to my horse, my trainer, and my instructor. iPod has given me the confidence and skill to feel like I can do anything I set out to do, in or outside the ring.

For example, I recently bought my first real show horse, Nova, and she's very “game” (she has a lot more “go” than any other horse I've ridden). I was able to use the lessons I learned from iPod to handle Nova. As my junior exhibitor career winds to an end and I progress into the adult divisions, I will forever be thankful.

10:00 am to 4:00 pm
Location:
The Heritage Society
END_OF_DOCUMENT_TOKEN_TO_BE_REPLACED