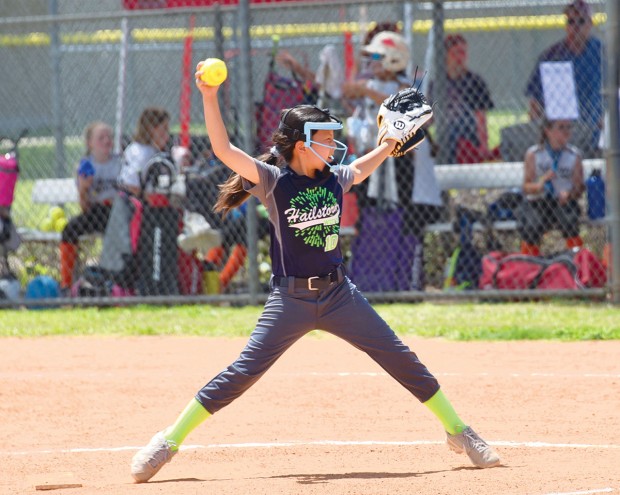 Every inch of my skin had been scorched by the Texas sun. As I dragged my feet from the dugout to the mound, spinning the ball between my fingers, it felt like miles away. My heart was racing, my hands were trembling, and I was sweating. As soon as I stepped atop the mound, my muscles and bones sprang with new vitality. I spun around to face the catcher’s glove, ideally positioned behind home plate.

I began pitching six months ago and have thoroughly enjoyed it. “New pitcher, watch her!” screamed the opposing squad. As if nothing had happened, I continued pitching. However, the ball did not always follow me. I wrote “Listen or lose” on it and trained in my backyard, rain or sun, day and night. I hoped that the  ball would one day become my  ball.

If we lost, my summer-tournament season at the West University Softball Association would come to an end. Tsunami, a higher-ranked 10U team, might beat my team, Hailstorm. We battled like warriors while leaving dust trails that formed clouds in the air. We were tied at the end of the third inning. My courage grew as the game progressed. After the first two batters, I almost struck out the third.

The third batter swung at my third-strike ball but missed it. The batter dashed across the diamond as soon as she saw the catcher miss, making it to first base ahead of the ball. It was a heartbreaking moment for Hailstorm. Tsunami began to wreak havoc on all bases, even home. We lost by a hair in the end. With no ball in my glove, tears streamed down my cheeks as a wave of sadness swept our team. The season was winding down, but I knew I’d given it my all.

A week later, Tsunami’s coach unexpectedly invited me to join his team for the season’s final tournament in Humble. In the scorching heat, we played for hours. After overcoming the difficult loser bracket, we came in second place! I got my first tournament ring soon after, and the ball became my  ball.