Rodeo in the Family 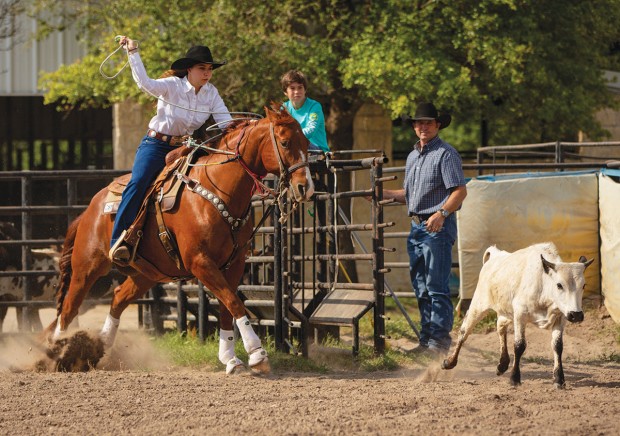 When it comes to RodeoHouston 2022, there’s a new girl in town. Madison Outhier, enterprising and energetic at 19, will be riding in from her sophomore year at A&M to compete in the seven-day women’s breakaway roping event.

It’s a new women’s event for RodeoHouston, where the rider and her horse leap from a standstill into action at breakneck speed when a calf is released from a chute. The goal is for the rider to rope the calf and bring her horse to a stop as quickly as possible. The rope is tied to the saddle horn with a light string, which breaks easily when the calf hits the end of the rope, ending the time and letting the calf run off. All this is done in a few seconds’ time.

The sport is not new for Madison. Nor is Houston, or RodeoHouston. That’s because Madison, who won the first women’s breakaway roping championship title at the 2019 The American rodeo, is from a long line of star cowboys and horsewomen, all of whom have Houston roots. 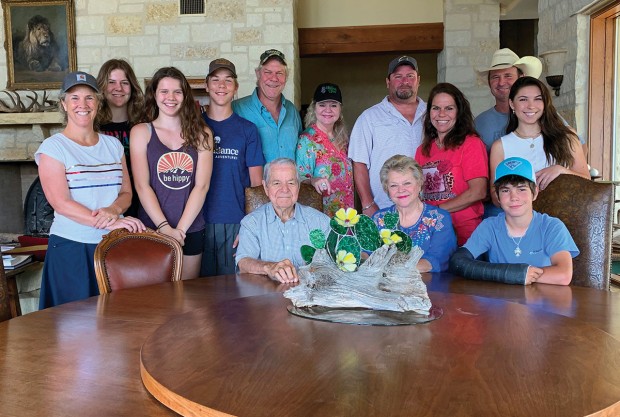 Madison’s grandfather, Lou Waters, a Houston businessman and founding chairman of Browning-Ferris Industries, grew up in Pecos, Texas, where “it was really, really rural,” says his daughter-in-law, Gerry Waters (married to son Lou Jr.). “Like he rode around on horses and didn’t see a car till he was about 10.”

Lou came to Houston to attend Rice University, and it was there he met his future wife, Wanda Phears. When she went to Pecos to watch Lou ride in a rodeo, that was it. “I was just pure city,” Wanda says. “I went to Bellaire High School the year it opened, grew up in Southside Place, as city as you can get. And Lou was a pure old country boy and a brilliant engineer, a Rice engineer who rodeoed on the weekends. I thought that was pretty cool. 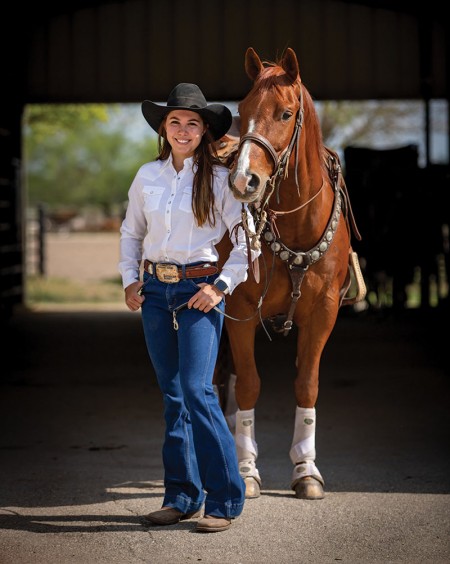 “He always told me he had to have some land,” Wanda says. Fifty years ago, she and Lou bought a ranch in Utopia. The city girl now says, “I love, love, love it more than anything else!”

The ranch is where Wanda and Lou’s children, Lou Jr., Kristy Waters Outhier, and Laurel Waters, spent weekends growing up. All of them learned to love horses there, with Kristy, Madison’s mother, eventually becoming the No. 1-ranked female polo player in the country (she recently spoke to students at Episcopal High School, where she was a member of the first graduating class, about her career).

Today, Laurel owns The Laurel Tree, a Texan-French restaurant that sits on the edge of the ranch and is home to a dine-in treehouse. Madison’s younger brother, Ace, loves to fish, “and he’ll feed us all when we’re there,” his grandmother Wanda says. Gerry and Lou Jr.’s three teenage children work at the ranch when they’re not in Houston, running the feed truck and working in the restaurant.

“There’s a lot of animal feeding and horse riding and hiking and fishing and ranch-y stuff they do out there,” Gerry says. “Madison rides horses that have been bred, raised, and trained on the Waters’ ranch, by the Waters family. They have been running this program for over 50 years and have raised over 1,000 American Quarter horses during that time. Having that ranch and that space gave Madison the time and resources to really follow her passion, and it was the same for her mother. My husband spent time there inventing and fixing things, Laurel developed her creativity – she’s an amazing artist. I credit [the ranch] with giving them space to develop the sides of their personalities that bring them the most joy.”

Like her parents, Kristy met her future husband, Mike Outhier – Madison’s dad – at a rodeo. Mike was a saddle bronc rider at the Calgary Stampede in Calgary, Alberta, when they met. 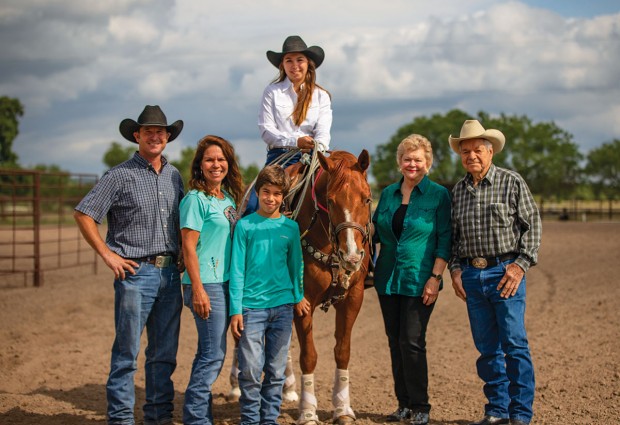 Competitive’ is the best word for my parents,” says Madison, who practices daily in Fulshear or on the ranch in Utopia. “I grew up going to the Houston rodeo and watching my dad. I definitely get my competitive edge from them.” She adds, “Just to have them as coaches at home – you can’t buy coaches like that.”

Like her mom, Madison plays polo, and she also competes in barrel racing. But when she won the breakaway roping championship, Madison says, “it sparked my love for it and made me want to pursue it at the professional level. From then on out, roping has been my main focus.”

Since winning the 2019 title at The American, Madison has amassed other titles like 2021 Women’s Rodeo World Champion and 2021 Resistol Rookie of the Year (her dad Mike was the 1998 Resistol Rookie of the Year in saddle bronc riding). She’s been featured in Western Horseman, Rodeo News, American Quarter Horse Journal, and other publications. Cowgirl Magazine included her in its “30 Under 30” article.

“It’s a really intense thing for a young kid to do,” her aunt Gerry says. “She travels many miles every weekend to compete. Madison sort of has her antenna out all the time. She’s launched a line of jewelry, runs a Christian Bible study for cowboys and cowgirls, she manages her social media accounts with sponsors. For some girls, she’s kind of a brand.” Gerry adds, “She’s sort of like a swan because she’s very serene on top, but there’s all this paddling going on underneath.”

Her grandmother says, “She’s taken the rodeo world by storm. She’s pretty low-key and humble, but when that whistle blows, she’s on. Just like her mother and father. Madison just lit everybody’s fire. Now there are all these little girls who know they can go out there and make good money.”

Madison says her grandmother Wanda is one of her favorite people in the world. “She and my grandpa are two of the most supportive people in my life, for sure. I look up to my grandpa in every way. He and my uncle [Lou] are such role models in business. And Laurel helped me create my jewelry line. She taught me to cook. She’s my creative inspiration. It’s really cool to have such a well-rounded family. I think I have a little piece of each of them.”

After graduating from the Mays Business School, Madison wants to be an entrepreneur like her grandfather and uncle. “Maybe I’ll even combine business and rodeo somehow,” she says.

For now, she’s looking forward to RodeoHouston. “Houston has always been my favorite rodeo to watch, and now I’m getting to compete in it. I’m over the moon excited!” 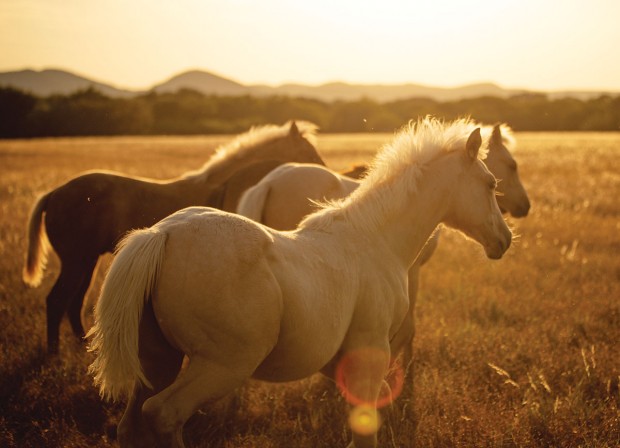 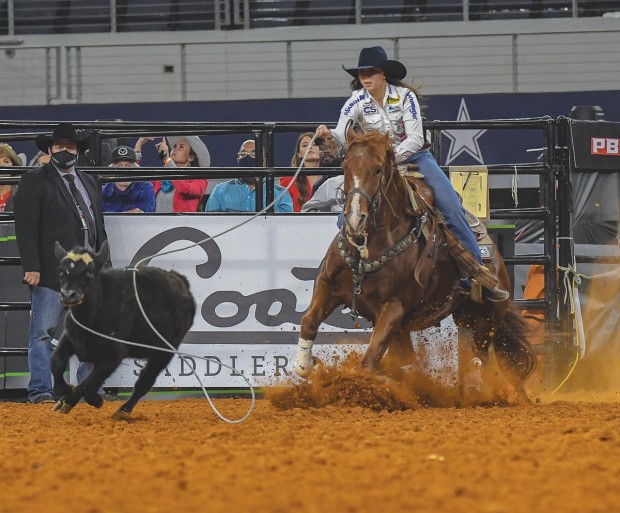 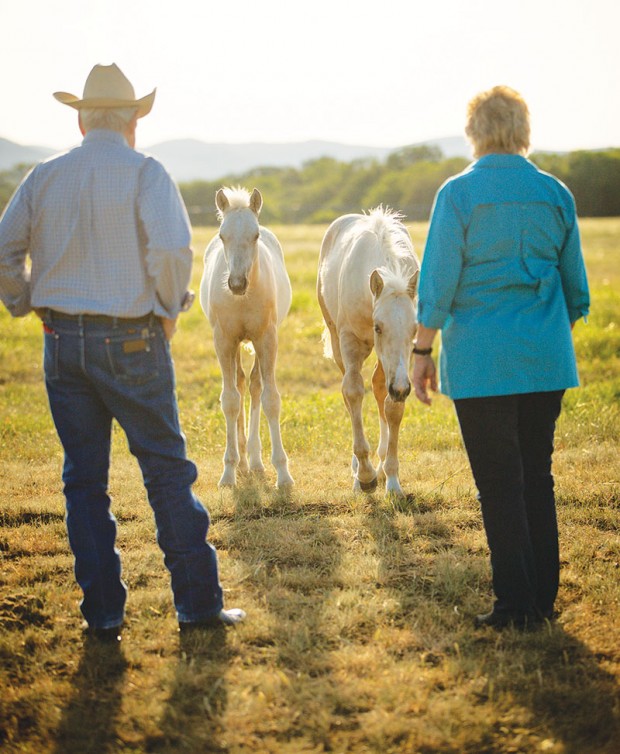