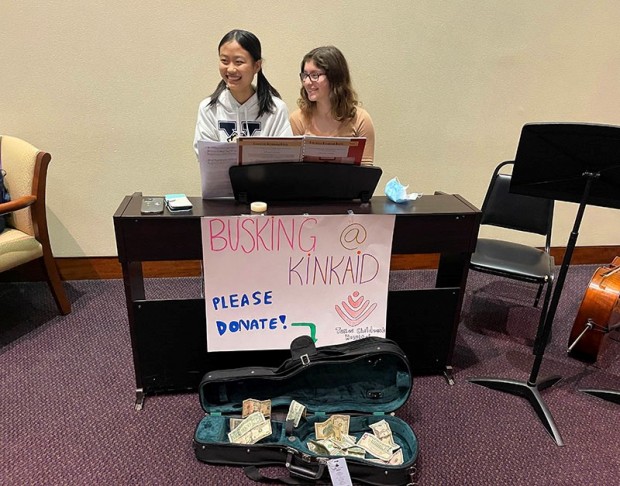 Freshmen Tiffany Zhang and Rosie Heghinian play a short piece on the piano during the showcase.

As freshmen Tiffany Zhang and Rosie Heghinian played “Norwegian Dance” by Grieg on the piano, the audience of several dozen students and faculty looked on with rapt attention. The moment that these two members of the Busking Club had been waiting for finally came on Feb. 25.

The Busking Club put on their first showcase at 6:30 p.m. before the first showing of the spring production, “Carrie: The Musical.” Members of the school community gathered in the Ogilvie Lobby to listen to club members play classical violin and piano pieces.

“It was so much fun to support my friends!” freshman Shaan Dhutia said. “I’m so glad I could attend the showcase.”

The Busking at Kinkaid Club was formed with the purpose of bringing together different musicians to entertain students and faculty for special occasions in an informal atmosphere. 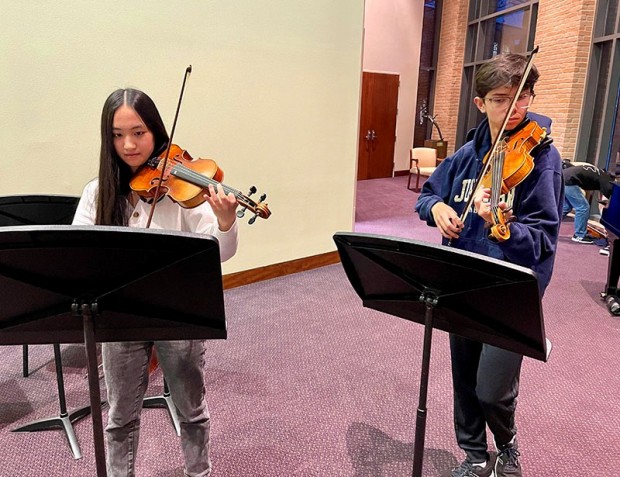 “The purpose of the Busking Club to me is to simply spread our love of music and passion to everyone, since music is such a uniting theme and concept,” Zhang said.

The club raises money for a variety of local charities.

“What I love the most about our club is that we get to do what we love while providing an audience with a brief entertainment, and the money we raise goes toward causes bigger than us,” freshman Rosie Heghinian said.

Club members prepared for the event during lunch and after school. They first chose what combination of duets or quartets they would perform, then ensured the whole set took 20-30 minutes.

“My only pieces were duets, so we used our extra time in Decisions to practice on the piano in the orchestra room,” Heghinian said. “There was one club-wide practice where we all performed what we’d been practicing and ran through the program.”

Heghinian was one of several members who had never busked prior to the performance.

“I was happy to be involved in this cause and that I could contribute while doing my favorite thing with some of my friends,” she said.

The club also collected donations. At the end of the night, the open violin case that lay in front of the Busking Club sign was filled with $125. The funds will be used to fund a music library at Texas Children’s Hospital.

"I think the Busking Club is really bringing awareness to the musical arts while also helping the community,” she said. “A lot of people don’t know a lot about orchestra and band, and busking club is a great way to bring awareness to them."