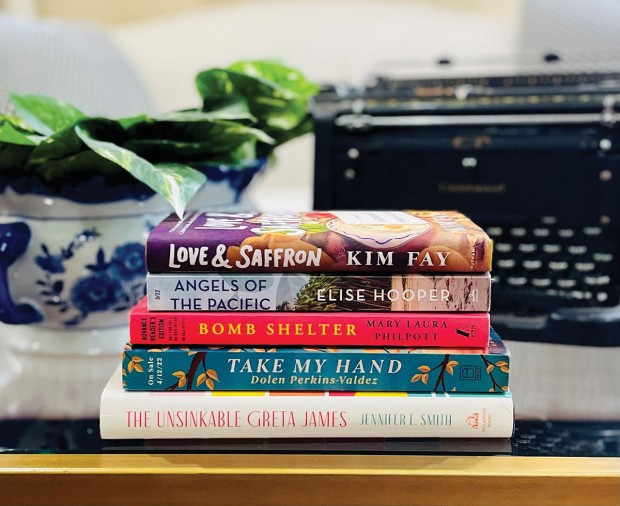 WHAT TO READ This month’s picks include three historical-fiction books, one about cooking and friendship, one about World War II in the Pacific, and one based on a true story in Alabama, a memoir written in essay format, and a beautiful story about relationships.

Angels of the Pacific by Elise Hooper – Set in the Philippines during World War II, Angels of the Pacific focuses on the Angels of Bataan, a group of U.S. Army and Navy nurses who courageously endured four years in the Santo Tomas Internment Camp after the Japanese Imperial Army invaded the Philippines. Hooper also weaves in the role that Filipinas played in the resistance, working to thwart the Japanese invaders. Hooper’s historical-fiction tale honors the various women who fought back under horrific circumstances and highlights a part of World War II that people are not as familiar with – the Pacific arena.

Bomb Shelter: Love, Time, and Other Explosives by Mary Laura Philpott – Mary Laura Philpott’s new essay collection is outstanding; her humor, hope, and insightfulness will resonate with anyone who has struggled to understand life, death, and the last few years. Centered around her response to her son’s epilepsy diagnosis, Bomb Shelter tackles serious topics but laces them with funny anecdotes about the turtle who lives in her yard and knocks on her back door, college tours, and her inability to keep pet frogs alive. Reading Bomb Shelter feels like spending time with a close friend and when you are done you will wish you were friends. Philpott’s can-do attitude and positive outlook are so refreshing, and it is also comforting to find that someone else worries as much as I do.

Love & Saffron by Kim Fay – Written in epistolary format and set in the 1960s, this beautiful book tracks the friendship between two women, Imogen and Joan, as they get to know each other through letters. Imogen Fortier is a longtime columnist for a magazine and lives on Camano Island near Seattle. Joan, who is younger, is a new food columnist in Los Angeles. When Joan writes Imogen a fan letter and encloses a recipe and some saffron, the women begin a correspondence that develops into a wonderful relationship. Incorporating the history of the era, food, and personal tidbits, the women bond and become close friends as they correspond about their lives. Filled to the brim with humor and heart, Love & Saffron is a joy from start to finish. It will be in my top reads of the year and is historical fiction at its finest.

Take My Hand by Dolen Perkins-Valdez – In this dual timeline historical-fiction story, Civil Townsend hopes to make a difference in her community by working as a nurse at the Montgomery Family Planning Clinic, a birth control clinic, in 1970s Alabama and serving those desperately in need of care. But when one of her first jobs involves putting 11- and 13-year-old girls on birth control when neither girl has even kissed a boy, Civil is compelled to fight this injustice. Years later, Dr. Townsend is ready to retire but these stories from her past refuse to stay hidden when she finds herself having to explain to her daughter what happened and why. This incredibly sad story highlights what happens when those in charge think they know what is best and take matters into their own hands.

The Unsinkable Greta James by Jennifer E. Smith – Following a public breakdown brought on by the sudden death of her mother, indie musician Greta James agrees to accompany her father on a cruise to Alaska. They have always had a tense relationship, and while she was alive, Greta’s mother, her biggest fan, had helped father and daughter communicate. With her gone, Greta and her father Conrad struggle to bridge the divide between them especially in the face of their shared grief. Both hope the cruise to Alaska will help them learn to understand each other. In addition to trying to repair her relationship with her father, Greta is working on her sophomore album, dealing with fans on the cruise ship, re-evaluating her current relationship, and trying to recover from her public meltdown. Ultimately, The Unsinkable Greta James is a story about repairing relationships, finding your joy, and living life to the fullest. I absolutely loved this one and highly, highly recommend it.