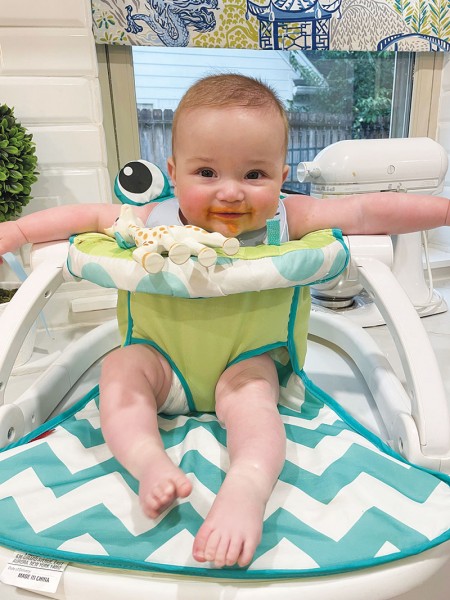 STARTING SOLIDS Mom-of-two Helen Bernard made her own baby food when her firstborn, Whit, started to eat solids. Pictured is his younger brother, Lane, at 6 months. Helen jokes she’s introducing solids the “second-time-mom way” with Lane.

Introducing solid food to your baby can be memorable and exciting but also overwhelming. Pediatricians can offer parents guidance and advice on this exciting endeavor, and there are lots of other helpful resources available too.

The Dietary Guidelines for Americans and the American Academy of Pediatrics recommend children should be given options for food other than breastmilk or formula when they are about six months old and developmentally have shown signs of readiness. A few signs solids are on the horizon are when the baby has started to maintain good head control, can sit up on his or her own, and begins to swallow food instead of spitting it out (and making a big mess on their chin and face instead of eating it).

Everything is new when solids come into the picture – not only for the parent but for the baby, too. There is the setup of it all, the child sitting upright in a highchair, seeing a spoon approaching their face, and their parent’s smiling, nervous face preparing to feed them (or letting them feed themselves).

Traditionally, a lot of babies start the solids journey on rice cereal, a simple, mushy substance of rice flakes mixed with water. One Buzz parent, who opted to stay anonymous, says when her oldest daughter tried rice cereal for the first time, it was a big family affair. “Both of our parents came over. We were all recording it on our phones,” she said, laughing.

Now with her fourth child, she says the videos have stopped but they still eased into solids slowly for her 10-month-old son through baby-led weaning. The mom said she picked up a copy of Baby-Led Feeding: A Natural Way to Raise Happy, Independent Eaters by Jenna Helwig and used it as her guide. Baby-led weaning is an introduction-to-solids technique in which the parent follows the baby’s lead, allowing baby to self-feed.

The difference between a more traditional form of weaning and baby-led weaning is that with traditional, babies are first spoon-fed with mashed, smooth food (such as purees, yogurt, or rice cereal), and learn to chew later; with baby-led weaning, babies skip the smooth-food phase and begin to experience the lumps and textures of food, and chew from the beginning.

Another Buzz parent, Helen Bernard, has found herself experiencing the introduction of solids in two opposite ways – the “first-time-mom” way and the “second-time-mom” way, she joked. Helen has an almost 6-month-old son named Lane, younger brother to Whitfield, their 2-year-old. When Whitfield was born, Helen and her husband Will were living in Chicago (they have since moved to Houston).

During the cold Chicago winter, when Helen was home a lot with her newborn baby, she decided to introduce him to solid food by making it all from scratch. “I made everything by hand and labeled each jar,” said Helen. She purchased a Vitamix blender (which runs around $300) to make the food. Helen says she spent hours each day making Whit’s baby food. Helen says Whit enjoyed pears, cinnamon, bananas, and sweet potatoes – mostly sweet foods. She also introduced him to vegetables, but he never really wanted to eat them.

With her second baby, Lane, she says things have changed and gotten more relaxed with the solids phase. Lane has not tried any homemade food from Mom. Helen picks up store-bought baby food when she is at the grocery store.

Another substantial change has been where he eats. With Whit, she would place him in his high chair and put his bib on each time for the meals. Lane eats in a more relaxed environment. “I am giving him food when we are on the fly and trying my best to follow our Moms on Call schedule,” said Helen. (Moms on Call is a popular sleep-training, baby-care guide).

Whit suffered from food allergies as an infant, some of which he still has, so Helen says she made sure to introduce one ingredient at a time (a common recommendation from pediatricians). Whit’s allergies included dairy, nut, tree nut, sesame, and coconut. Making her own solid food allowed her to keep better track of which ingredients were in the food Whit was eating.

Lane is six months now and getting his introduction to solid foods. He is not showing any signs of food allergies, so Helen feels more comfortable giving him premade baby food and pouches. With two under the age of 2 and concerns of choking, Helen says she feels prepared for solids after taking infant CPR classes at Northwestern Women’s Hospital in Chicago.

It is important to know the steps to take if an infant (up to the age of 1) stops breathing. Infant cardiopulmonary resuscitation (CPR) classes are offered online and at various locations in Houston. The class is often taught in one day and can become a life-saving investment. To register for a CPR class, see houstoncpr.com or see cprandsafetylady.com. Most local hospitals also offer CPR and safety courses.

Interested in resources for introducing solids? The Solid Starts App is a searchable food database of baby foods compiled by experts.

9:30 am to 3:00 pm
Location:
Cultural Center Our Texas
END_OF_DOCUMENT_TOKEN_TO_BE_REPLACED