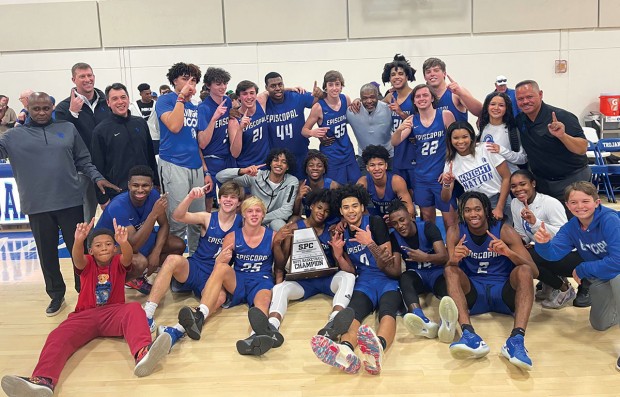 With a remarkable game-winning shot from sophomore Justin Begg, the Episcopal Knights captured their first SPC boys’ basketball championship since 2013. Trailing by two points to Dallas Greenhill as the final seconds ticked off, Begg connected on a three-point shot from deep in the corner to give Episcopal the dramatic victory, 52-50. “When I let it go I thought it was going in,” said Begg. “It had the right spin and everything looked great. It’s just a blessing - I don’t know what else to say.”

“It was legendary,” added Begg’s teammate and Knights standout sophomore Jakeel Registe. “When Justin made that shot we screamed, hollered, and celebrated.” For Knights senior Reid Turlington the fantastic finish couldn’t have been any more special. “This means everything to me,” said Turlington. “It’s the last sport I’ll ever play in high school and to end everything with a championship and especially on a buzzer-beater is just awesome.”

The victory also culminated a season in which Episcopal posted a lofty 30-7 record and was ranked fourth in the state among all private schools. “Just a special group,” added Knights head coach Wayne Jones. “We have this thing where I would say to them that they were the best part of my day when I got the opportunity to be with these guys. We talked about trusting the process, accountability, culture, and about love and we did all of those things. For this group to finish the way they did was just icing on the cake.” 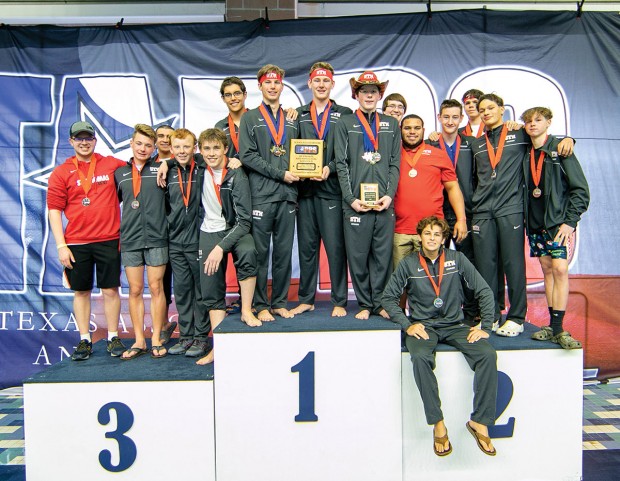 SUPER SWIMMERS The St. Thomas Eagles were again a powerful force at the TAPPS Division I State Swim Championships with a strong second-place finish. Over the last four years, the Eagles own two state championships and two state runner-up finishes. (Photo: Liz Parke)

Led by a sensational showing from senior Josh McLean, the St. Thomas Eagles finished second in the state at the TAPPS Division I State Swim Championships. The finish also capped off a phenomenal four-year run for the Eagles, which includes two state championships and two state runner-up finishes. “Just a really great core of guys,” said Eagles swimming and diving coach VanArthur Jones. “We have a lot of kids who are extremely invested and have sacrificed so many hours to succeed. It’s a super committed group.”

“Our four seniors in Josh, Dylan, Carrick, and Charlie Ramirez have been true leaders for this swim program for four years,” said Jones. “All four of them were part of our two state championships and two state runner-up teams.” 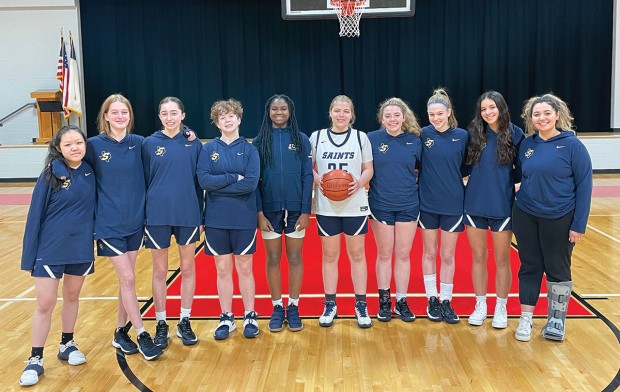 In girls’ basketball, it was an amazing turnaround season for the Saint Thomas’ Episcopal School, with the Saints earning a playoff berth for the first time in 15 years. In addition, the Saints advanced to the third round of the post-season before being eliminated in the TAPPS 4A regional quarterfinals. “It was very exciting,” said STE girls basketball coach Terri Petties. “Our girls hadn’t even won a district game in three years on the varsity level and this season we were undefeated district champions.”

The Saints went from worst to first behind a starting lineup that all earned first team all-district honors including district MVP Jennah Savage, freshman Chifum Ibekwe, sophomore Audrey Finch, junior Lillian Lehman, and sophomore Brinley Bowden. In addition, Petties was named the TAPPS 4A District 5 Coach of the Year.

“Everything just came together to make this happen,” said Petties, who has also been a track and field and volleyball coach at STE for 18 years before becoming the girls’ varsity basketball head coach just this season.

“First, we had Jennah transfer here from Deer Park, which was huge. Chifum came to our school as an eighth grader and she’s extremely talented. Chifum’s from Africa and actually taught herself to play basketball by watching YouTube videos and just working hard at her game. Also, Audrey had transferred to Bellaire in eighth grade but returned to STE for her sophomore year, and Lillian has gained a lot of experience with this being her third year of varsity. It’s also exciting that four of our starters will be back next season.”