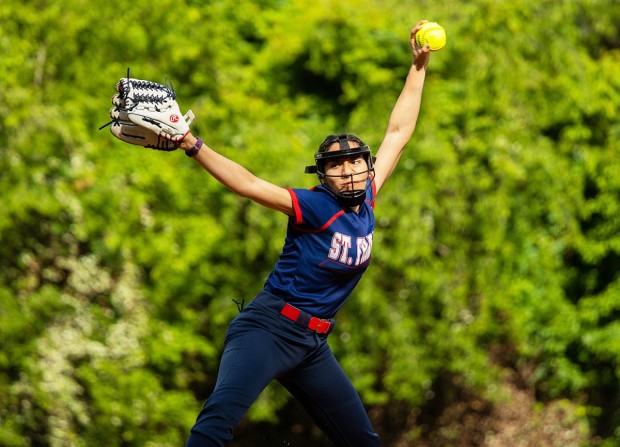 St. Francis senior Janelli Morones helped start up a softball team at school during her junior year. Next year, she'll continue to play softball at Princeton.

Softball season has begun at St. Francis and the girls are ecstatic. This is the school's second year having a softball team, coached by Don Hicks and Terry Harper. Last year, the team triumphed after having an undefeated season.

None of their work would have been possible if it wasn’t for their pitcher, senior Janelli Morones. Morones has been playing softball since she was six years old. She didn’t start off as a pitcher; she was a first baseman until she reached 10u. A coach noticed her at a tryout catching with her father and highly suggested that with her strong arm, she could be an incredible pitcher.

Since then, she has grown to pitch at 70mph. She transferred to St. Francis her sophomore year because of the college counseling department and the opportunities she would not have obtained elsewhere. When spring came around, she tried to start a team but due to lack of players, she was unable to.

She was persistent, though, and tried again her junior year. This time she managed to get enough girls to sign up and the first softball season began. Most of the girls had little to no experience, but Morones and Coach Hicks were willing to work with them and grow their skills.

The team was just as surprised as everyone else when they ended the season with a perfect winning streak. No one was prouder than Morones.

“An undefeated season is something every team strives for, but very few achieve,” says Morones, “I was fortunate to share this experience with the special people in my life.” Now a year later, Morones and the team have begun their training. It has been hard balancing school, softball, and track, but she manages. Through most of her high school years, she played outside of school for Texas Elite Fastpitch where she was a pitcher, first baseman, and outfielder.

Despite being such a talented player, she received a lot of backlash and resistance from teams. “I had several coaches tell me I’m ‘no good’ or ‘the field was not made for left-handed players.’” she says. Instead of dwelling on these comments, her love for softball helped her believe in herself to prove them wrong.

In the fall, Morones will be attending college at Princeton University where she will study architecture and continue to play softball. Morones’ success has inspired other St. Francis students to take on leadership roles and start their own activities. Her determination and leadership skills are what lead to a successful season and sparked new passions and potential for the team's future.