BIS Houston Takes to the Road 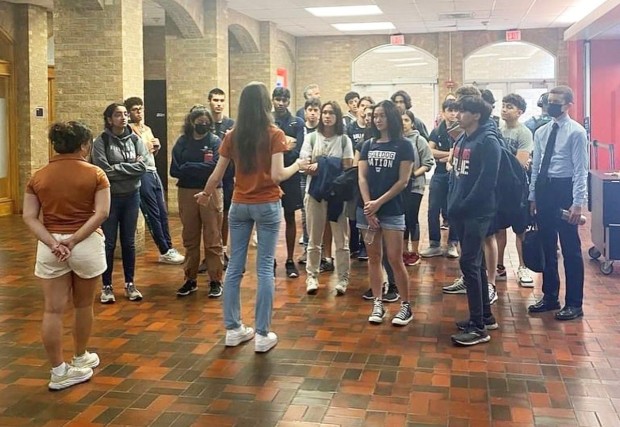 BIS Houston students on a tour of the University of Texas at Austin. (Photo: Paula Cooper)

On Monday, students piled into the school minivans for their first college visit at College Station to see Texas A&M. After an hour-long ride through the Texas countryside, they arrived at their destination and set off on a tour of campus facilities led by a current Aggie. With a proud emphasis on community and their military-affiliated students, the tour showcased some of the unique aspects of studying at Texas A&M and gave a thorough glimpse into the traditions that characterize being an Aggie.

Harish P. comments on his experience touring the college: “A&M has a very modern and spacious campus. Going on a weekday was a great opportunity to able to experience the busyness of the campus and get a feel for university life.”

Tuesday saw an even bigger group show up to visit the University of Texas at Austin, nearly completely filling the minivans for an over two-hour road trip from school to Austin. The tour began with a quick look at an example dorm room, something not all universities offer right now, which was interesting to view. Following that, the next hour was spent being guided around some of the most important places on campus such as the library, athletic facilities and computer science building.

Finally, Wednesday was designated to visit two universities - the University of Houston and Rice University - but both were thankfully a lot closer to school.

Kyra K. says, “I’m really glad that I got an opportunity to visit both schools in person since the trip truly surprised me. I found that I was more comfortable and inclined towards going to a larger school like the University of Houston when compared to Rice University, though the architecture there was gorgeous nevertheless."

Overall, this was a great way to help BIS Houston students interested in Texas universities to get a better idea of what life is like at their prospective colleges. All students that participated had a great time learning about and experiencing the universities for themselves.