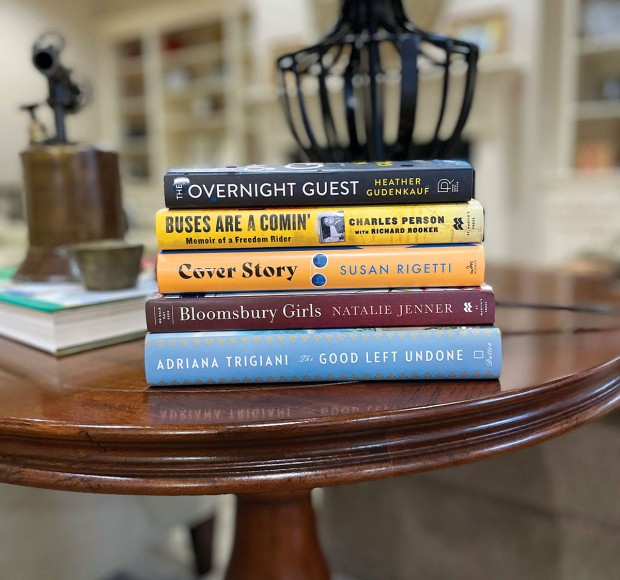 WHAT TO READ This month's picks include a clever thriller, two historical fiction books, a ripped-from-the-headlines novel, and a paperback release about the 1961 Freedom Rides.

Bloomsbury Girls by Natalie Jenner – In 1950s London, Bloomsbury Books, a bookstore that sells new and rare books and that has existed for over a century, is run by men and guided by the general manager’s 51 rules. But following World War II, Vivien, Grace, and Evie, three strong women working at the store, strive to modernize the store’s ways and chart their own paths in a male-dominated world. Interacting with literary greats such as Daphne du Maurier, Ellen Doubleday, Peggy Guggenheim, and more, these three women push the boundaries of the early 1950s. I loved everything about this one from the literary setting to the characters to the book’s resolution.

Buses Are a Comin’: Memoir of a Freedom Rider by Charles Person and Richard Rooker (paperback release) – Buses Are a Comin’ should be required reading in the U.S. because this personal history of the Freedom Rides of 1961 is quite an amazing story. The bravery and strength of the individuals who participated in these rides to secure equal rights for all in the face of incredible opposition is awe-inspiring. The fact that some people were so upset by integration that they would wait for buses to arrive just to torment and attack the riders is hard to fathom for most people today. The book provides the context for and the build-up to the Freedom Rides and the clever strategies the riders eventually used to prevail in their mission to desegregate interstate buses. I partly read, partly listened to this one, and I highly recommend both. The audiobook is fantastic, and the book includes some amazing photos from the Freedom Rides.

Cover Story by Susan Rigetti – NYU student Lora Ricci’s internship at ELLE Magazine introduces her to the cutthroat world of fashion and the wealthy people who populate the industry. When Cat Wolff, a contributing editor to the magazine and daughter of a wealthy mogul, takes Lora on as a mentee, Lora is initially thrilled. She agrees to become Cat’s ghostwriter and drops out of school to focus full time on writing. As the two begin working on the book, Lora soon realizes that all is not as it seems; Cat comes and goes at all hours, and bills seem to go unpaid. The book and its format (emails, FBI reports, diary entries, and more) are fabulous, and I recommend going into it with little knowledge of the story to ensure nothing gets spoiled. It is a wild and crazy ride and just so well done.

The Good Left Undone by Adriana Trigiani – Based on a true story, this dual-timeline saga spans 100 years while chronicling four generations of strong, fierce Italian women and their loves, losses, secrets, and heartaches. Relayed through the matriarchs’ flashbacks, the story depicts the fallout from the sinking of the Arandora Star by a German U-boat and all that follows as a result. As the two timelines come together, long-buried and surprising secrets are revealed as Trigiani addresses the universal themes of identity and belonging. This is a beautiful read that kept me captivated.

The Overnight Guest by Heather Gudenkauf – The premise of this thriller hooked me from the beginning. While staying at a remote farmhouse, true crime writer Wylie Lark ends up snowed in as she is trying to write her latest book. The location would be ideal, except that decades earlier, at this same house, two people were brutally murdered and a girl disappeared and has not been seen since. As the storm settles in, Wylie finds herself stuck in the house, haunted by its secrets and her own secrets. When she heads out to walk her dog, she finds a small child alone in the snow right outside the house where she is staying. She brings the child inside for warmth and safety and then begins to hunt for the parents. The twists and turns were a lot of fun in this one and while I figured a few things out, there were enough surprises to keep me madly reading until I got to the end. It was a page turner with a highly satisfying resolution.