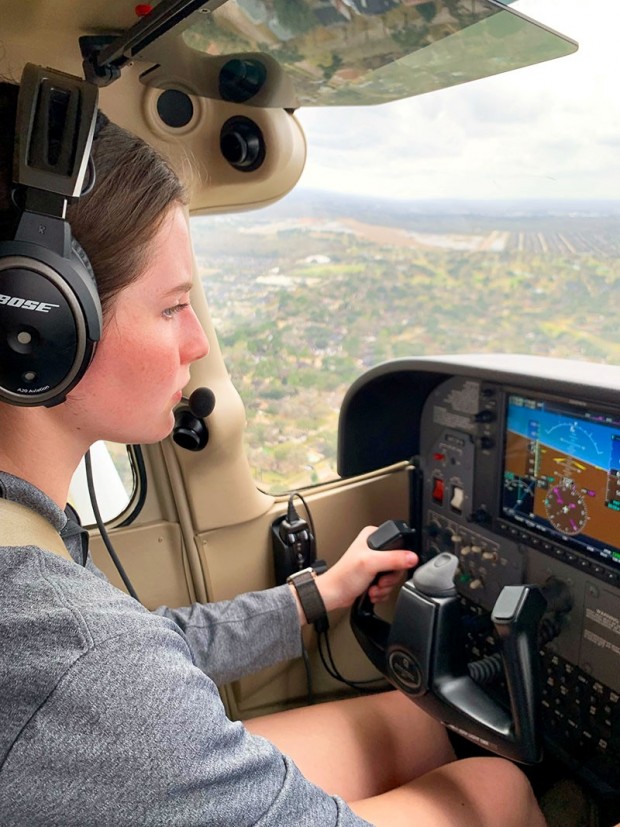 St. Francis has many extraordinary women that do incredible activities in and outside of school. One that stands out from the others is senior Elizabeth Berry. Berry transferred to St. Francis her junior year. She previously went to St. Francis’s elementary school but the upper school was new to her.

Balancing school and flying was hard but St. Francis helped Berry greatly so she was capable of doing both. “St. Francis has been very lenient with me leaving for flight lessons and supporting me,” she says, “I honestly just put flying first towards the end.”

Berry’s interest in flying started with her grandfather who is a helicopter and airplane pilot. Because of this she had the privilege of being around airports and even flying in private jets. She didn’t decide to pursue flying until she went to an airport in Florida in December 2019 where she got to see a ton of jets including Michael Jordan’s private jet and an Air Force One. From there her mind was set on becoming a pilot.

Berry began in April 2021 with a Discovery Flights where she got a trainer for an hour who showed her the basics of flying to see if she liked it. She grew to love controlling the airplane and creating goals to make every landing smoother than the last. Her current instructors are Christy Graham and Andrew Addicks. She rents a Cessna 172 Skyhawk at the West Houston Airport where she did all of her training and has over 100 flight hours. Taking the steps to getting her license was no easy task. One major step for her was flying solo for the first time. She also had to do night flying and solo cross countries to La Grange and College Station. She ended up completing her pilot's license on March 2, 2022.

In the fall she will be attending college at Embry Riddle Aeronautical University where she will continue to study airspaces, regulations, weather, and aerodynamics. She will major in Aeronautical Science, which will allow her to obtain all her licenses and allow her to choose what she wants to do with her career.

“I am very excited to be able to go to Embry and do my training there,” says Berry, “Also to be around people my age who are interested in flying and aviation in general. Not to mention it’s in Daytona Beach, Florida.”

Berry’s main goal right now is to get all her licenses and ratings. As far as a career plan, she wants to be a cargo pilot or charter private jets. Berry is very proud of what she has accomplished over the past year. Around this time last year, she was just learning how a plane worked. Now she is on her way to becoming a pilot. Berry is one of a kind and will do incredible things with her future.