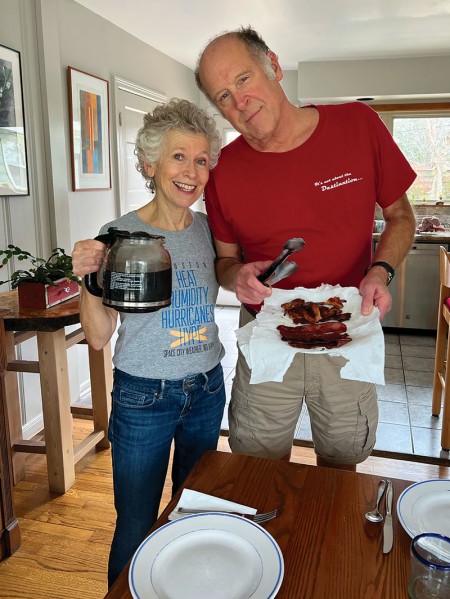 The other day I asked my kids what they most remember about Sunday morning breakfast, a family tradition we oldsters have celebrated for almost 50 years.

Set the table. Make bacon, eggs, and coffee. Love the folks (family and as-good-as-family) who haul themselves out of bed and show up. That’s it.

And yet, it’s an oddly complicated and emotional ritual. We could tell the history of our multi-cultural family in Sunday morning breakfast episodes. The births and deaths. The weddings and babies. The laughter and tears, too.

Once, Mom cried because everybody was savoring the details of the most recent Thanksgiving dinner, and she couldn’t remember any of it. Her mind was sharp but her memory, Swiss cheese.

There were other teary breakfasts that Manda started to tick off but stopped.

After Manda, I talked to Sam, the 36-year-old who also lives in New York. What did he remember about SMB? 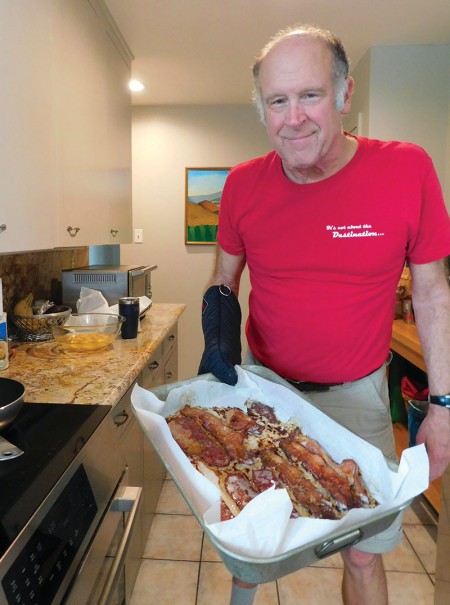 The tradition started in the mid-1970s, when my brother, sister, and I were graduating from college and setting up apartments. Mom and Dad still wanted to see us on a regular basis.

While they cooked, our job was to slide into our chairs at 9 a.m. sharp, regardless of any hijinks that might have occurred the night before.

Talk at the table revolved around new jobs and new work friends, some of whom became favorites around the breakfast table.

Boyfriends, they were a different story.

Once my dad told me: “Claud, I’m not going to like any boy you bring home.”

And, the feeling was mutual. My folks were old school. What guy would want to show up at any parental house at 9 a.m. on a Sunday?

I married the one who did. 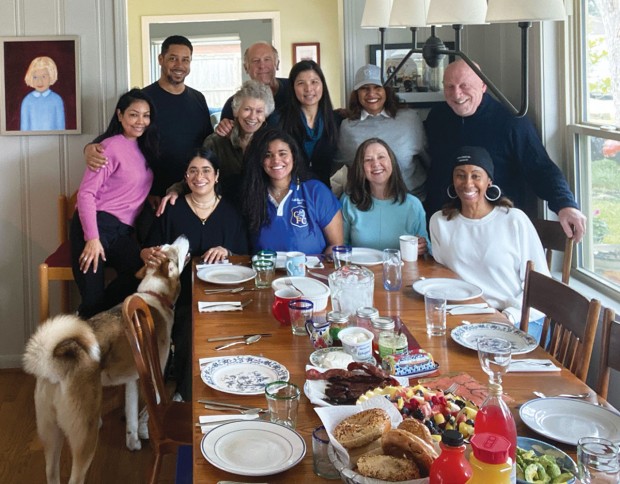 When our kids were little and bringing friends to SMB, that was a sweet spot.

My parents could still lift skillets and hear the conversation – often, multiple conversations at once. The sandwich generation seemed stable and happy, and the kids were joy.

Sure, they got in trouble sometimes. Once Sam mooned his pals at summer camp. Even though his little rump was covered by underpants, the camp director still wanted to talk to Grandpa.

(Yes, we were working parents, and the senior set frequently picked up an assortment of grandchildren at the end of the camp day.)

Dad listened as the director ticked off Sam’s sins.

They went to get ice cream.

But the kids didn’t always get off so lightly. There was a seventh-grade year when one young teen in particular was usually grounded. But as she and her cousins knew, the thought of having youthful transgressions discussed around the breakfast table – with grandparents listening closely – was incentive to behave.

During those years we had our share of health catastrophes and that many SMBs at nearby hospital cafeterias.

It was healing for the patient, we all thought. And it gave Dad the chance to pound home one of his favorite theories:

It’s not what lays you low. What counts is your recovery.

SMB changed again as the four Houston cousins and their friends graduated from high school, college and established outposts of their own. Unfortunately, they lived too far away to be lured home with the promise of coffee and a bagel. 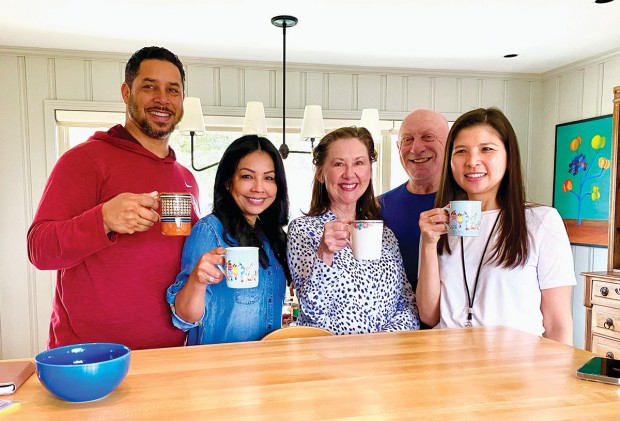 Not long after Dad died, we shifted SMB to our house.

Mason, my husband, was already making the bacon because Mom didn’t like to get the stove dirty. Brother Dave was cooking, too. The path to Mom’s heart was grilled chicken, so he grilled chicken. Lots of it.

Mom had Parkinson’s, and at the end, she often fell while she was trying to stand. So SMB came to her, and we took charge of the kitchen.

We knew things were awful when she told us one morning not to worry about the Thanksgiving turkey; she’d already bought it.

I peeked in the refrigerator.

Mom was gone within the week.

That was September 2015. By then my sister was a long-time Ohio resident, and masterminding SMB fell to Dave, me, and our significant others. Our numbers shriveled, but we carried on. Then Covid struck, and the vaccines were still beyond reach.

We tried to save SMB by moving it outdoors. Finally, the sun was too hot and the health risks too great.

Like families everywhere, we were split up by a worldwide pandemic.

Today, we’re back together and attendance is up. The leaf is permanently installed in the dining room table, and we often cook for nine or 10 or more if there are special guests.

Only one member of the youngest generation has returned to Houston and the SMB roost – my niece Gabbi. But friends and neighbors-who-have-become-family help fill in the empty spots. They bring homemade bread, sausages, bagels, energy and enthusiasm.

As always, we talk about everything and nothing. Football. Politics. Work. Kids. Dave and I tend to tell rambling stories seemingly without a point or an ending. But, just the other day, he told a yarn so sweet and compelling that he actually got a standing ovation. Yes, at breakfast.

These days we are all colors, a melting pot, a blend of beliefs. Also we are business folk, medical folk (I overheard this sentence floating in the air last Sunday: “I told her Botox was not an emergency!”), tradespeople, retirees, and a lawyer, again dear Gabbi. At 28, she is the youngest of the cousins and decades younger than everybody else at the table.

When she was a little girl, Sunday mornings included dessert, and it was Gabbi’s job to slip into the kitchen with her grandmother and bring out the sweets with a flourish.

These days Gabbi still has a special role.

She’s the hippest, the fastest, the best debater. Advice from Gabbi you can take to the bank.

The other day, I asked her in so many words – do you still like to come? I worried until I got her eloquent text.

The short answer: Yes. The tradition, routine, and stability mean more to her than ever. She understands that the SMB crowd would do anything to help her – any time, for any reason.

“It’s a living organism that expands and contracts and re-organizes itself to make sure everyone in attendance has a place to sit and to share and to listen. A recognition and preservation of the idea that fellowship need not take itself too seriously in order to be essential and influential in one’s life.

“Also the bacon is made in the oven, as God intended.”

I had always prepared bacon in a frying pan on the stove top until a few years ago when my son mentioned that one of his colleagues recommended the oven. A quick online search produced numerous raves about cooking bacon that way, and it turned out that method is preferable.

The bacon cooks evenly to the crispness you desire. It doesn’t splatter grease from the pan all over the stove. It frees you from constantly tending the skillet. And it allows you to cook more bacon at a time.

Most of the online directions I found are about the same as mine:

Preheat the oven to 400 degrees and spread the bacon slices in a single layer on parchment paper or foil in a suitable pan. (I use a 12-by-18-inch roasting pan inherited from my mother, which enhances the historical family vibe.) Put it on the lowest oven rack for 15-20 minutes.

The Sunday morning breakfast crowd likes crunch so I usually crank the oven to broil for the last minute, keeping a close eye on it to avoid burning. When the meat matches your style, drain it on a plate covered with a paper towel, transfer it to a clean plate, and prepare for the plaudits.