Thrillers That Will Keep You Turning the Pages 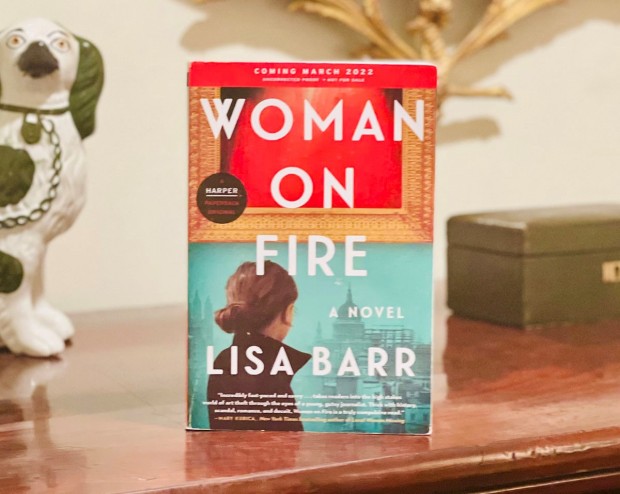 Need something to sweep you away for a bit? Cindy Burnett recommends Woman on Fire by Lisa Barr as well as four other thrillers.

Thrillers are tricky for me because I am pretty choosy about which thrillers I pick up and am even choosier about the ones I end up liking. Thriller writers must balance the need to build tension as the story progresses with making the story realistic enough to not pull the reader out of the story. They also must craft a resolution that is not obvious and that does not involve having the antagonist come out of left field. Striking that balance is hard to do.

Sometimes I figure out what is going to happen way too early and sometimes I spend my time frustrated with characters who are behaving in highly implausible ways which pulls me out of the story. I find that the latter issue happens a lot in the domestic suspense subgenre so I stay away from those, and they rarely show up on my recommendations.

Here are some of my recent favorites that I thoroughly enjoyed reading:

The Cartographers by Peng Shepherd – When Nell Young’s estranged father, a renowned cartographer, is found dead in the New York Public Library where he works, she discovers that he was clutching the very same basic gas station map that caused their falling out years before. Curious about the importance of the map and its potential link to her father’s death, Nell conducts research and discovers that the map is exceedingly rare, in fact it is the only one left of its kind because an unknown collector has destroyed every one but the one her father owned. Baffled by this bizarre discovery, Nell sets out to uncover the secrets behind the map. This unique and creative tale is a page turner with an intelligent and engaging plot; I highly recommend it.

One Step Too Far by Lisa Gardner – This second installment in Gardner’s new series starring cold-case solver Frankie Elkin is a page turner from the beginning. Recovering alcoholic Elkin seeks out cases around the country that have been abandoned by officials and works to help to solve them. In One Step Too Far, Elkin turns her attention to the disappearance of Tim O’Day five years prior while on a camping trip with friends in a remote area of a national forest in Wyoming. She joins the 5th anniversary search party and heads out into the rugged wild, quickly realizing that almost everyone in the search party is hiding something. Gardner’s choice of setting makes this book and creates an almost constant feeling of dread as Elkin works to understand what happened to Tim O’Day and why. This book kept me on the edge of my seat the entire time I was reading it.

The Overnight Guest by Heather Gudenkauf - The premise of this thriller hooked me from the beginning. While staying at a remote farmhouse, true crime writer Wylie Lark ends up snowed in as she is trying to write her latest book. The location would be ideal, except that decades earlier, at this same house, two people were brutally murdered and a girl disappeared and has not been seen since. As the storm settles in, Wylie finds herself stuck in the house, haunted by its secrets and her own secrets. When she heads out to walk her dog, she finds a small child alone in the snow right outside the house where she is staying. She brings the child inside for warmth and safety and then begins to hunt for the parents. The twists and turns were a lot of fun in this one and while I figured a few things out, there were enough surprises to keep me madly reading until I got to the end. It was a page turner with a highly satisfying resolution.

The Paris Apartment by Lucy Foley - This atmospheric thriller takes place in a creepy, once-elegant apartment building in Paris where secrets lie just below the surface. As the book opens, Jess escapes a bad situation in England and flees to Paris to stay with her half-brother Ben, but when she arrives, Ben is gone. Bewildered by his absence since they had texted the day before, she approaches the other residents to inquire about Ben, but quickly realizes that no one wants her there nor do any of them want to talk about her brother. Foley combines a myriad of clever twists and turns, a fantastic setting, and a satisfying ending to create a thriller that you will not want to miss.

Woman on Fire by Lisa Barr – After fledgling reporter Jules Roth talks her way into a job with Dan Mansfield, Chicago’s preeminent investigative reporter, he assigns her to a top-secret story, locating “Woman on Fire,” a very valuable painting purloined by the Nazis during World War 2. But Jules doesn’t have much time because the man Dan is helping find the painting is dying. In Europe, heiress and art collector Margaux de Laurent hunts for the same painting and will stop at nothing to find it. As Jules gets drawn into the dangerous and seductive art world of the uber-wealthy, she uncovers secrets and betrayals while becoming intrigued with the mesmerizing painting (and its subject) at the center of the drama. Using a plethora of realistic twists and turns combined with a stellar plot and an intriguing cast of characters, Barr creates a thriller that kept me on the edge of my seat.