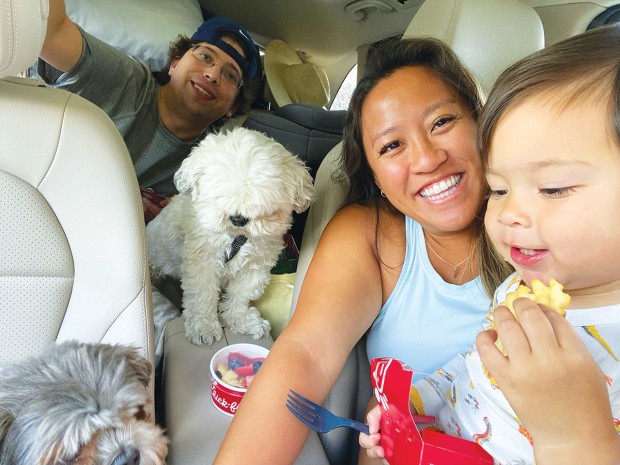 PACK YOUR PATIENCE Many say that traveling without kids is called a vacation – traveling with kids is called a trip. But venturing out of town with little ones is usually well worth the extra planning. Pictured: Mack, Allison, and Ezra Schaffer, plus their two Shih Tzus, on the road to Seaside, Fla. last summer.

Buzz Baby is a column about life with babies. Writer Annie McQueen is a mother of four children 7 and under.

Summer is approaching, and for many families, travel plans are on the horizon. Embarking on an out-of-town adventure – whether by airplane or car – with small children takes patience.

I remember a trip to Colorado my husband and I took when our now 7-year-old twins were just 10 months old. We packed so much gear and I had done so much research on what to bring, how to handle feedings on the go, and traveling in general with infant twins, but no research could have prepared me for an unexpected, very delayed flight. We spent more than six hours at the Denver airport.

My husband and I set up an area at an empty gate to wait. The twins were in the crawling phase, so we were exhausted chasing them around the gate area. As I changed a diaper on one of the twins, I peered in the bag, realizing it was our last one. That is when I learned that airports do not sell diapers. Lesson learned.

That trip certainly did not stop us from traveling again and again with our children; it just helped us be more prepared for the next one.

Buzz mom Allison Schaffer has two boys, Ezra, 2, and an infant, Archie, 6 months. Last summer, Allison learned the ropes of traveling with a small child (and while 7-months pregnant).

She and her husband Mack took a 10-hour drive to Seaside, Fla. with Ezra, then under 2, and their two Shih Tzus. Even though traveling with kids is difficult, she says it was an important milestone for her. “I grew up taking road trips to Florida, so I was so excited to do the same with my kids,” said Allison.

Toddlers have a tough time sitting still – let alone being strapped in a car seat for hours. Allison hatched a plan. She had snacks, ready-accessible diapers, and a clean change of clothes for Ezra, an iPad as a last resort plan. They decided to leave town early around 4 a.m. to beat the traffic and make it to the beach by lunch, making most of the drive while Ezra was sleeping.

They broke the drive up into two parts. “We packed the car up early in the morning, woke up our toddler for a quick diaper change then got him in the car while he was still drowsy,” said Allison. “He slept until we made it to the border of Texas and Louisiana.” She said they stopped for lunch and let him move around, then brought out his favorite snacks for entertainment.

She also made plans to stay comfortable on the long road trip while pregnant. She chose to drive the entire way, which she says helped her with nausea. She brought a special wedge pillow to use behind her back. She also recommends staying hydrated to help with nausea and circulation.

Her other tip for traveling with kids is to get in the right frame of mind. “Go into it with the mindset that ‘you will get there when you get there,’” said Allison. “We went in knowing that we may have to stop or we may have to swap drivers or we may even have to turn around and go home, and that put us in the right frame of mind to handle any issue that could have come our way.”

Allison recommends talking about the road trip or flight to your toddler ahead of time. “It helped. We talked about how long it would take in terms of snacks and naps. [Like] we get to eat breakfast and snacks in the car and take a nap there too, and then we will be there.”

They packed a few essential pieces of gear for their Airbnb: an inflatable bathtub (Amazon has them for around $14), a lightweight umbrella stroller, and for sleeping overnight in the room, a “slumberpod” – a lightweight, portable pod that pops open, darkening their sleeping area but still allowing air to flow. She says the slumberpod was a gamechanger.

The Schaffers used a portable wagon to get to and from the beach. The drive back home was difficult as it rained the entire way. They made a stop at a Chick-Fil-A and had a “car picnic” and let Ezra pretend to drive the car (with the engine off). “It was one of the most hilarious meals we have ever had,” laughed Allison.

The Schaffers will check off their first hotel stay as a family with an upcoming wedding in Austin and are planning their first plane ride soon. Allison says she will approach the plane ride with the same mindset, but she is excited to see Ezra’s reaction to looking out the window at the airport at a real airplane.

No matter where you’re heading this summer and how you’re getting there, just remember to enjoy the ride. And take it from me – if you’ve got little ones in tow, pack plenty of extra diapers.