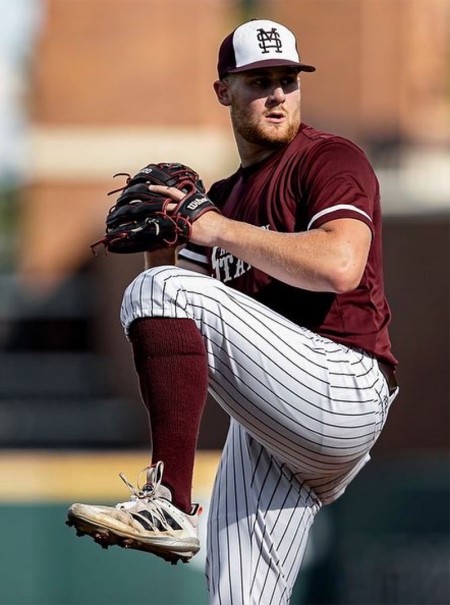 Stone giving it everything he's got while pitching for Mississippi State.

But life isn’t always perfectly pitched strikes. Stone’s journey has not been smooth. Thankfully, his faith, family, and coaches have continued to inspire him along the way. And he’s inspired others, too.

Recently, Stone attended a Kinkaid baseball game and talked to the players about his time at the school - overcoming challenges, winning the SPC championship game, the recruitment process, and the work ethic needed to play division 1 baseball.

His advice to high schoolers who want to play in college: “Stick with it. Everyone will face adversity, and if you keep your head down and work through it, you’ll have a great chance of succeeding in baseball and you’ll definitely become a better and stronger person.” 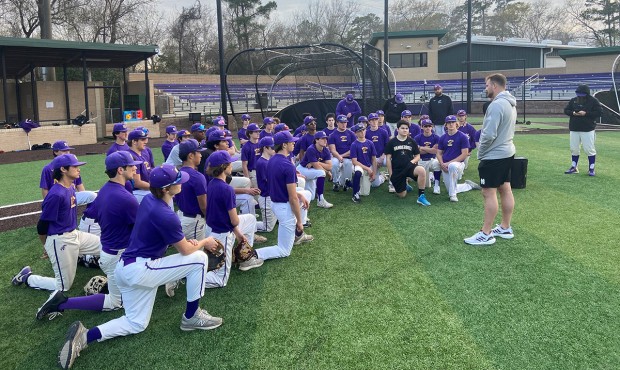 While Stone was in Houston for his surgery, he visited the Kinkaid baseball team to share encouraging words. Coach Steve Maas appreciated the talented alum talking with the current players.

Kinkaid Varsity Baseball Coach, Steve Maas, noted, “What makes Stone so enjoyable is his work ethic and who he is as a person.  He is a kid who’s really easy to root for because he does everything the right way. The decisions he’s made along the way helped him to get to where he is today. He’s earned every bit of it.”

Stone launched his baseball career slamming t-balls at Sugar Land’s First Colony Little League and then moving up to swinging for the bleachers in West U Little League.

“Even as a 12-year-old, Stone had a genuine love for baseball and was already a student of the game,” remarked David Ranucci, one of Stone’s West U Little League coaches. “He paid attention to details and would make his own assessments and adjustments on the mound or at the plate!”

After middle school at Presbyterian School, Stone flew right over to Memorial to take flight on The Kinkaid School Falcons baseball team.

Stone's Little League self dreamed of pitching in college one day.

During his senior year, Kinkaid’s record was 31-2. Stone set an all-time school strikeout record of 101 K’s. He also pitched a Complete Game (CG) where one pitcher throws every inning without any relief. For the third straight year, Kinkaid had to get past Episcopal in the playoffs. In the seventh inning, Stone stepped up on the mound with two men on base and struck out the next two batters. Kinkaid was thrilled to win the 2019 SPC Championships and become the #1 ranked private school in Texas. Stone said he was thankful to have such an amazing way to finish out his high school baseball years.

Stone signed with Furman University in Greenville, SC and picked Business Administration for his major. The Furman Paladins’ 2020 spring season was off to a good start. Unfortunately, things came to a halt on March 12 when Furman officially shut down the 2020 baseball season due to the Covid pandemic. The extra surprise came a week later during a team Zoom call in which the university’s athletic director announced that, as part of massive financial cutbacks due to Covid, Furman was discontinuing their baseball program.

Stone headed home to Houston and entered the transfer portal. Over the next two weeks, he received many scholarship offers. Kinkaid Coach Steve Maas helped Stone manage the transfer process. “Over the years, he has helped shape me into the pitcher/player I am and has always kept me focused on my baseball career,” Stone said.

Stone decided to commit to Mississippi State; he was excited about their baseball program and had multiple relatives who attended MS State, so he knew how special the school, the stadium, and the Bulldogs baseball program was.

During the 2021 season, Stone made 19 appearances as a reliever at MSU and the team went on to win the College World Series. It was the first time Mississippi State had won a national championship in any sport. All of Starkville, MS, the home of MSU, celebrated the big win. 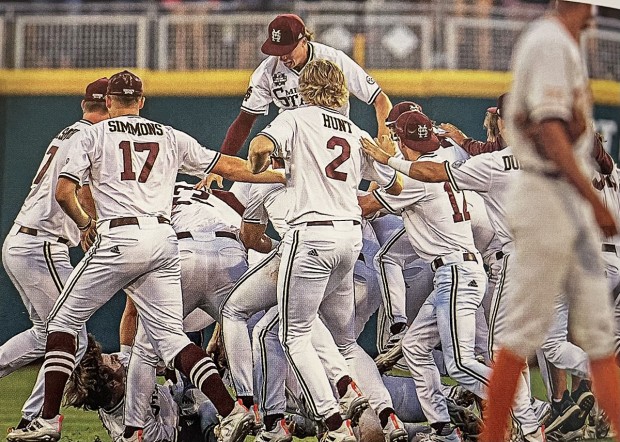 A Mississippi State Bulldog dogpile! The team celebrates MSU's first national title in the history of the school.  Stone, #17, joins in the fun.

“Winning the National Championship was incredible!” Stone said. “We have the best fanbase in all of college baseball and that just made it better. We got to win it in front of over 20,000 of our own fans and then proceeded to go home to Starkville where there were many more people waiting for us in the parade.

“The day of the parade was definitely one of the craziest days of my life. It was so awesome sitting on a fire truck. We were all so happy to be up there looking down on what felt like the entire city of Starkville below us cheering us on.

“It’s difficult to put how I felt into words, but I will say that I don’t remember a time when I stopped smiling for a span of about a week.”

The 2022 spring season was off to a good start but, in March, Stone tore his UCL during a game. The injury required ulnar collateral ligament reconstruction (also known as Tommy John surgery), which has about a 13-month recovery period - another setback encountered on the journey to fulfill his dream of playing Major League Baseball.

Now, Stone is back in Mississippi for rehab, classes, and to cheer on his team.

“My arm is doing great. I’m painless and haven’t had any issues thus far. I have to wear my brace for another few weeks. Right now, my job at games is to just be the best teammate I can be. I’ve always been very passionate about my team having a lot of energy, and now I get to try to help that happen in the dugout,” he said. 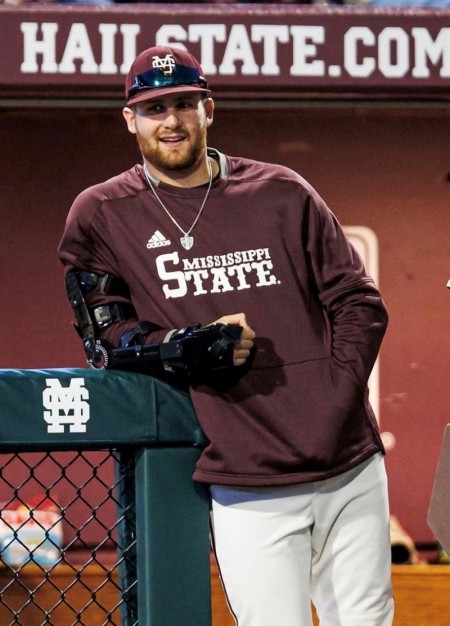 Stone's baseball journey has been full of adversity but he says his experiences have made him stronger. He's currently recovering from an injury while rooting for his teammates.

In addition to his two top fans (and parents) Doug and Alison Simmons, Stone’s grandmother, Karen Stone Young, who he calls Mimi, is a close third. She shared, “Stone has great faith. When he got this injury, his mom, dad and I were devastated but Stone just said, ‘It’s God’s plan. I’m not going to question it.’”

One of the ways Stone has found to help grow his faith and mental strength is through the organization Fellowship of Christian Athletes. Stone shared, “FCA is kind of like Young Life just for the athletes. FCA is special because it provides athletes an incredible community and creates a strong foundation in Scripture, which is so important because the majority of us often have to miss Sunday church because of our athletic responsibilities. At MSU, my FCA community is extremely important to me, and I attend every week.”

Stone reflected, “My career has been full of adversity. My ability to put my head down and work through as well as bounce back and recover stronger from adversity has without a doubt been my biggest strength in my baseball career. I feel like there are so many young athletes who could benefit from learning how to develop more confidence and deal with adversity in a healthy way. I welcome adversity because it makes my story even more interesting and gives me more of a challenge.”

With his grit and positive attitude, we look forward to watching Stone Simmons pitch in the Major Leagues one day. 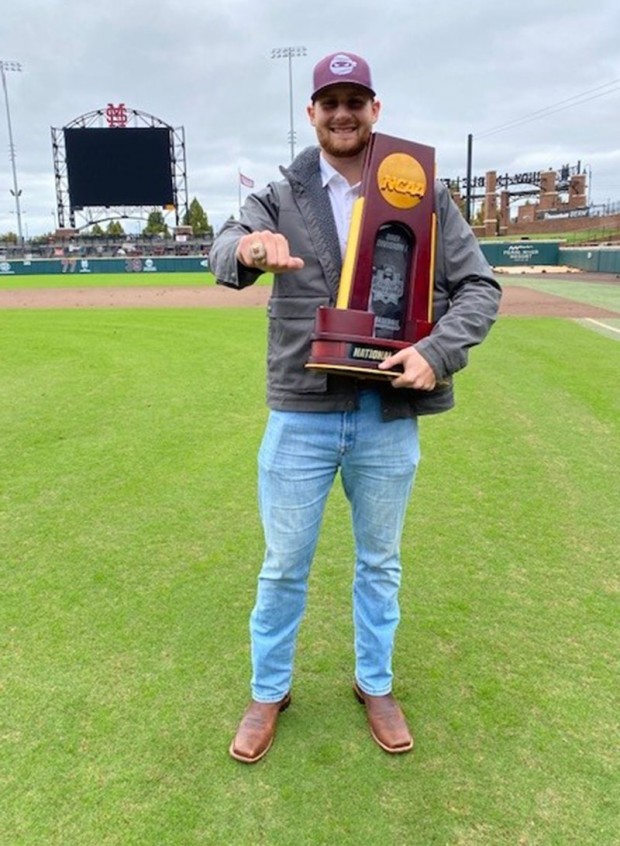 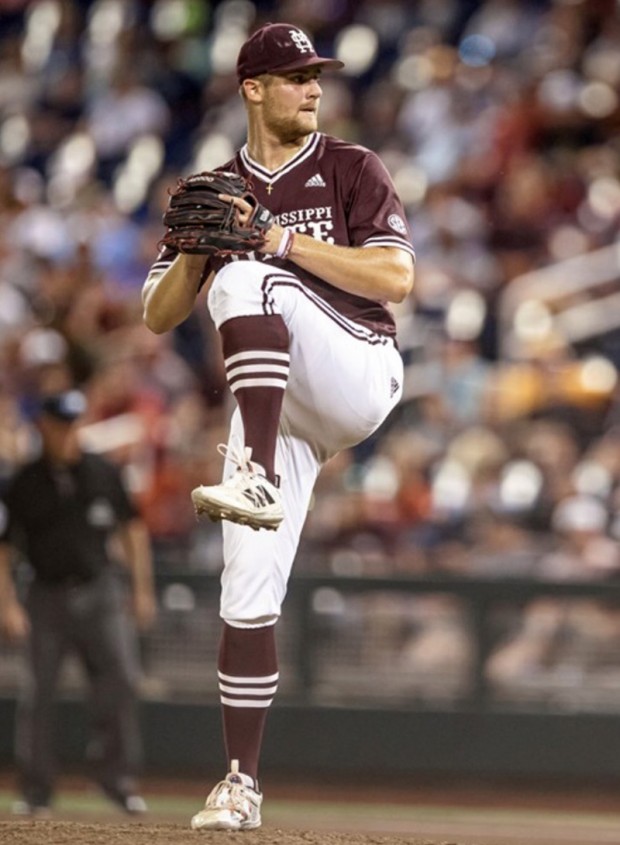 MIssissippi State's Stone Simmons throws his best stuff from the mound during the 2021 College World Series. 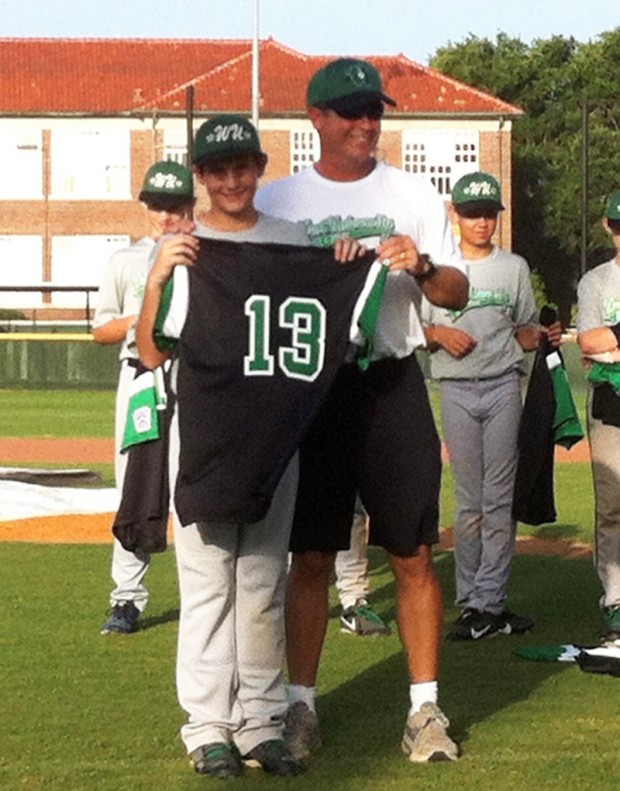 Stone was all smiles when he got his West U Little League jersey. 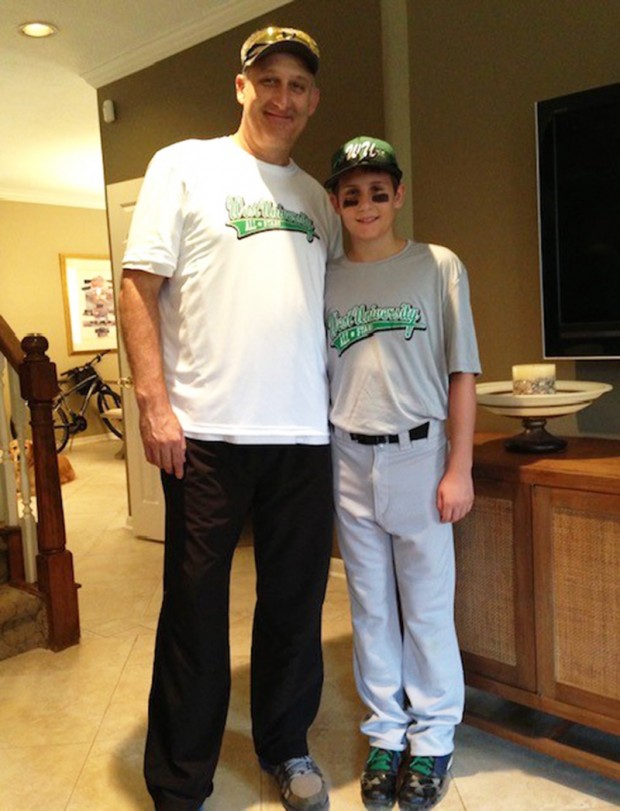 Stone and his dad, Doug Simmons, ready to head out for a great West U Little League ball game. 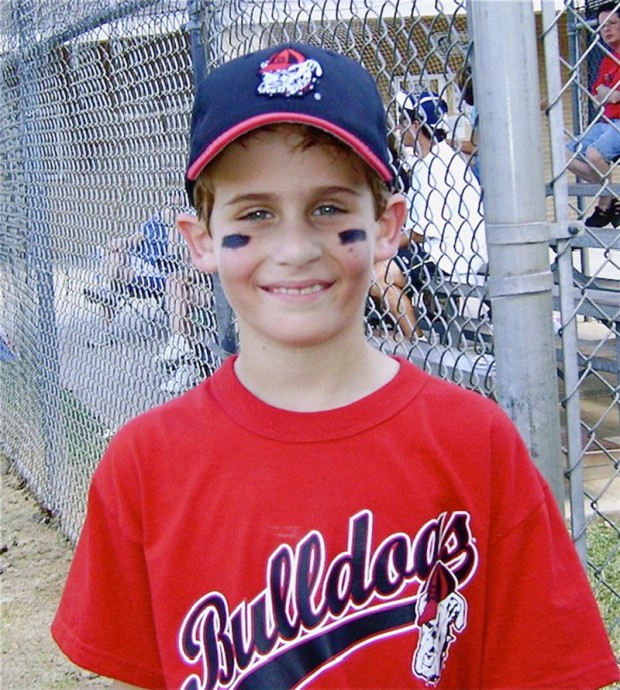 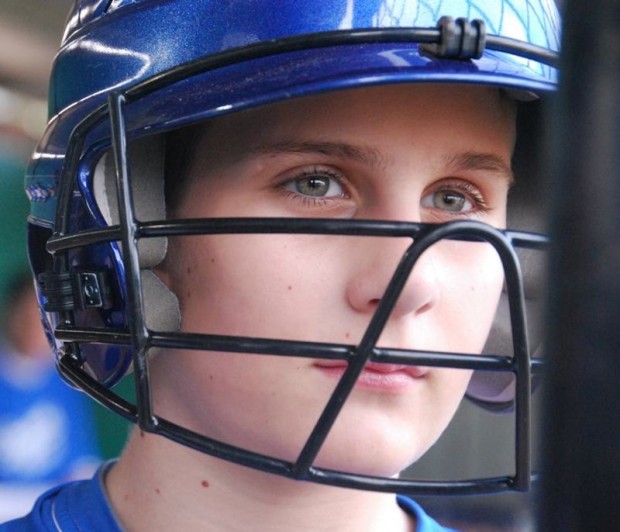 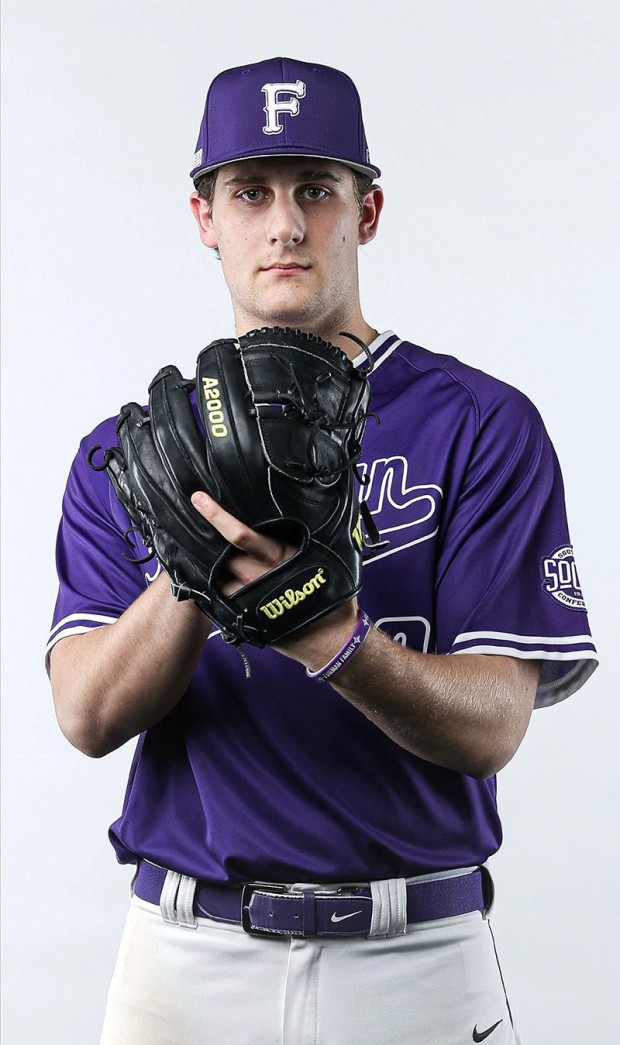