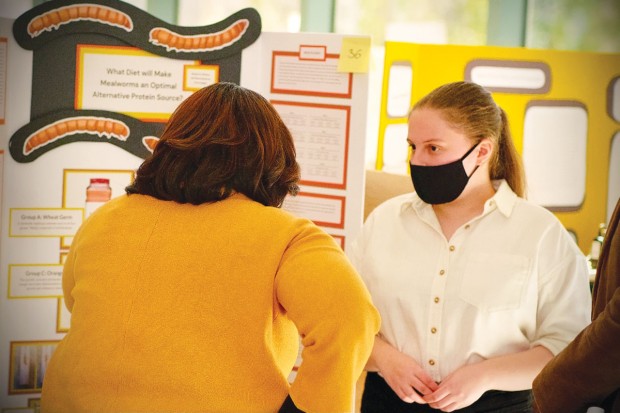 SQUIRMY SCIENCE Anna Siegel, a junior at Xavier Academy, won first place at the school’s science fair for her project, “What Diet Will Make Mealworms an Optimal Alternative Protein Source?”

If someone had told me a month ago that I would conduct a research project with the potential to actually help solve the global dilemmas of world hunger and climate change before even graduating high school, I never would have believed them. I would have been even less likely to believe that I would find the existence of this potential solution in the form of the Tenebrio molitor, or, as it is more commonly known, the mealworm. And yet, whenever I am asked about the project that won me the grand prize in my school’s science fair, I find myself explaining how I managed to do just that.

Due to the current state of our planet, the only way to possibly solve the issues of world hunger and climate change is to replace the environmentally harmful systems that we use to produce animal-based proteins. Searches for a replacement have pointed to the mealworm as being an ideal candidate due to the insect’s high protein content and capabilities for sustainable mass production. After reading several articles on the topic, all of which resulted in similar, disappointing conclusions explaining that a lack of research towards mealworm farming prevents this idea from becoming a reality, I realized that I had found the perfect science fair topic – as long as I could convince my parents to let me keep live mealworms inside the house.

Throughout my experiment, I split a total of 1,200 mealworms into four different groups, each of which I supplemented with a unique food source and weighed before and after they were fed. Analysis of the data I collected showed that mealworms sustained on a diet of oranges experienced the highest rates of weight gain, a conclusion which demonstrates that nutrients found in oranges can be used to help optimize the use of mealworms as an alternative source of protein.

While this finding was enough for me to win the Xavier Academy Science Fair, I know that it has the potential to do so much more. However, this experience has taught me how much work truly needs to be done before we can fully unlock the mealworm’s potential to change our world for the better. I know that my efforts towards making this possible have only just begun.