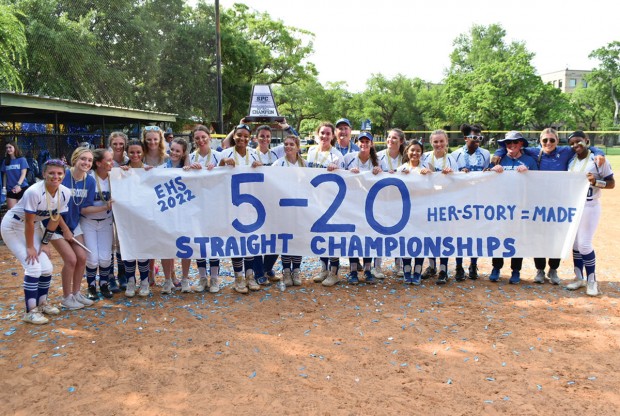 It was a magnificent season for the Episcopal Knights softball team, which became one of only an elite group of teams to win five consecutive SPC championships. In addition, the Knights also won their 20th SPC championship in softball.

“Our motto all year was ‘5-20,’ which signified the goal of winning five straight titles and 20 total championships for our program and our girls stayed focused and driven throughout the season,” said Knights head coach Caitlyn Cain. “It was pretty fun and exciting.”

In the SPC tournament, Episcopal senior pitcher Reese Barrett had a perfect 0.00 E.R.A. in 16 innings of work, while behind the plate senior catcher Lily Tanner also had an outstanding tournament. “Lily is a vocal and strong leader and works really well with Reese as her battery mate,” said Cain. Also on the mound, freshman closer Reagan Moriarty didn’t allow an earned run all season. Other standouts included junior shortstop Emma Poirot who led the team with a .453 batting average while sophomore Allie Williams belted six home runs to lead the team.

“I was also fortunate to have an extremely knowledgeable and experienced coaching staff,” said Cain. “We had Kary Kemble managing our outfield, former Louisiana Lafayette All-American Lexie Elkins running our offense, and former University of Georgia player Cortni Emanuel as our speed and agility coach. They were all outstanding.” 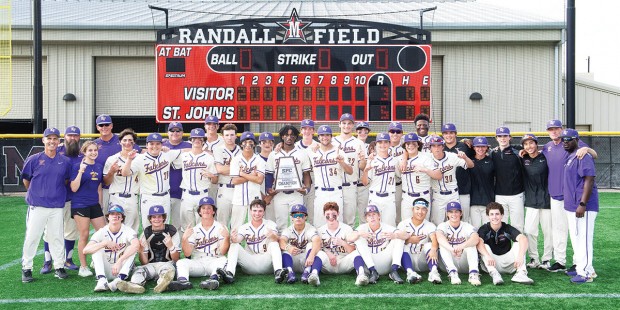 In baseball, the Kinkaid Falcons won their third SPC championship in the last six years by beating rival Episcopal 5-3 in the SPC tournament final. The Falcons rallied from 3-2 fifth inning deficit with a solo homer from senior shortstop Rashaad James followed by back-to-back doubles by Jack Klosek and Charlie Kugle to take the lead. Standout closer Miles Roeder threw three innings of scoreless relief to seal the victory while third baseman Cooper Chambers made a sensational play to end the game with the tying run at the plate.

“This championship was definitely special,” said Falcons head coach Steve Maas. “When we last won the title in 2019, our team was loaded with Division 1 collegiate talent and those guys were expected to win. This year’s team didn’t have the bigger names and the expectations were not nearly as high, but they played with grit, heart, and somewhat of a chip on their shoulder. Our senior leadership was unbelievable.”

For the season, James led the team with a .389 batting average and eight home runs, including three homers in a pair of victories over Episcopal in the final week of the season. “Rashaad was our most talented player,” said Maas. “His character and work ethic were also outstanding. The other players listened and looked up to him. He was our biggest leader.”

Other top players included senior pitcher Connor Doan, who struck out 80 batters in 62 innings of work while posting a 9-1 record. In addition, senior Carter Kelsey fired a no-hitter in the regular season finale, and then started and pitched the first-round innings of the SPC final victory over Episcopal. 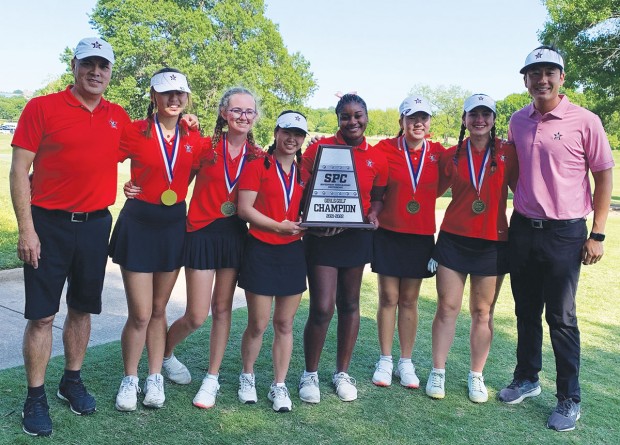 On the links, the St. John’s Mavericks captured SPC Golf Championship for the fifth consecutive season. The Mavericks pulled away from the field with an impressive 38-stroke victory over second place Kinkaid. “Our girls were just outstanding,” said Mavericks girls golf coach Jack Soliman.  “This is the first time I’ve had a team where all five girls shot in the 70’s on the same day. It’s an extremely rare feat in the SPC and we definitely played our best golf in the championship tournament.”

The Mavericks top scorer was sophomore Brielle Burns who finished third overall with a one over par score of 145 (73 and 72) over the 36 holes. Finishing just one stroke behind Brielle in fourth place was senior Ashley Yen who shot a two over par 146 (75 and 71) over the two rounds. “Ashley really set the tone for our team all season,” said Soliman. “She is a team leader who shows she can compete with bigger and strong girls. It’s inspiring to watch her play.”

In addition, Kenna Lee of St. John’s finished in eighth place overall to give the Mavericks three top ten finishers, while fellow Mavericks Rachel Liu and Eloise Chapman were 11th and 13th, respectively. “As a team we have the depth to compete with any high school team at any level,” added Soliman. “It’s a pretty formidable group of players.”