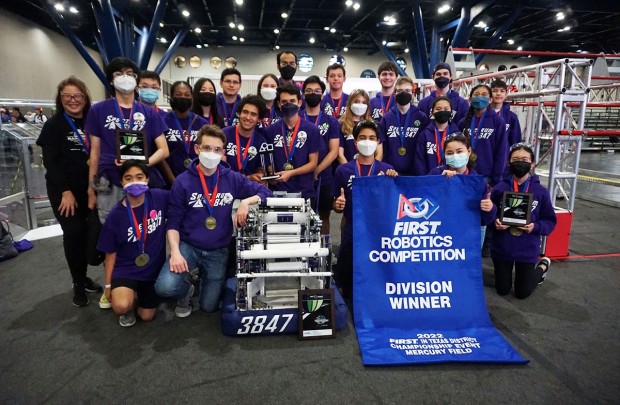 The Spectrum 3847 team finished first in their division.

The 2021-22 school year was another exemplary year for the Strake Jesuit and St. Agnes engineering team, Spectrum 3847. Eighty teams from Texas and New Mexico competed in the FIRST Robotics Competition at the Texas District/UIL State Championships April 6-10 held at the George R. Brown Convention Center. Spectrum 3847 earned the title of FIRST in the Texas District Championship and secured a spot at the FIRST World Championships.

At the State Championship, the team was awarded the Finalist Award, Mercury Division Winner Award, and the Gracious Professionalism Award. Spectrum Coach Allen Gregory IV was given the First in Texas Volunteer of the Year Award. Also, Andres Ramirez was awarded FIRST Dean’s List Finalist and will advance to FIRST Championships.

Spectrum 3847 is one of the 23 teams from the Texas/New Mexico district that made it to the FIRST World Championship, which is the culminating international event of the youth robotics competition season. Ranking third in the state of Texas, Spectrum 3947 competed against 200 teams at the FIRST Championship event held at the George R. Brown Convention Center April 21-23. 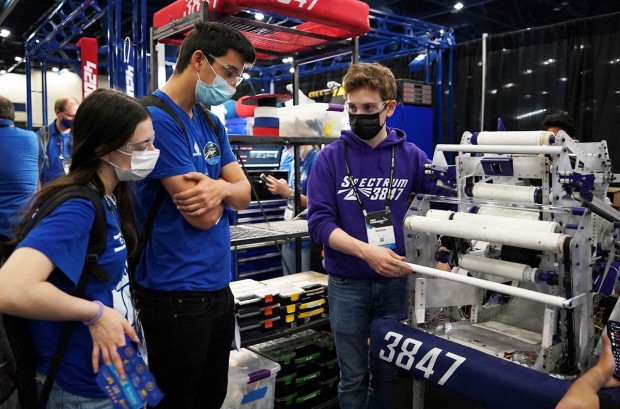 At the championship competition, the team placed in the Newton Division and joined an alliance, which made it to the Quarterfinals. Spectrum 3847 was also awarded the Gracious Professionalism Award-Newton Division. Andres Ramirez, who advanced as a Finalist for the Dean’s List award after the state competition, was one of four students selected from the Texas & New Mexico region. As a Finalist, Andres participated in the championship round of interviews for the Dean’s List Award.

“Andres is a great example of a student leader who has led Photon FRC 8515, our developmental team, achieved personal technical expertise, and helped other teams at events,” said Spectrum 3847 Head Coach Allen Gregory. 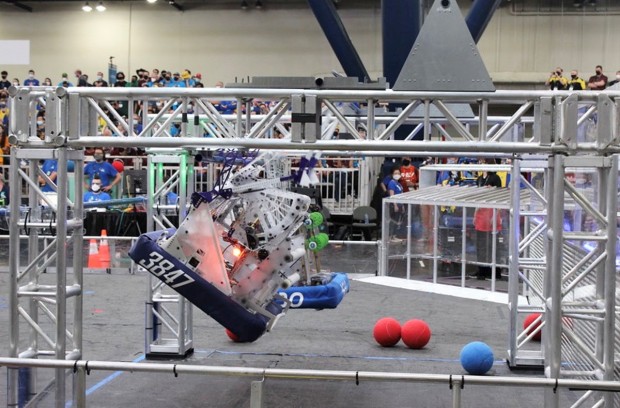 The Spectrum robot completing the climb portion of the game at the state tournament.

Strake Jesuit junior, Sonny Perez, said, “It was interesting to see that the way we plan, design, and build our robot was significantly different than the way some international teams did. This was especially highlighted by Taiwan because they would consistently change parts of their robots during the tournaments, whereas teams from the US typically stick to one design from the start. To see this different perspective was very eye opening and helpful.”

The joint Strake Jesuit and St. Agnes team continued again this school year to excel. “It’s a truly fantastic experience to see the growth and excellence from this team grow year by year. The state and FIRST Championships were a great ending to a strong year,” said Gregory.