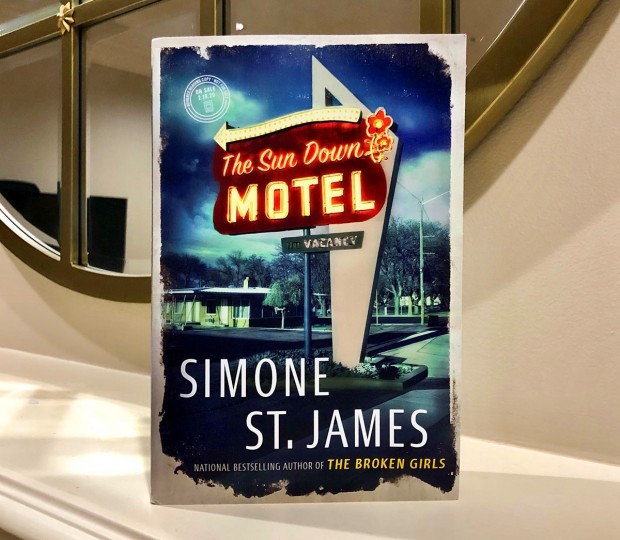 Need a thrilling book to read this holiday weekend? Try The Sun Down Motel by Simone St James.

Memorial Day weekend is almost here, and long weekends like Memorial Day call for entertaining, fun books to read while sitting by the pool. I picked five suspense-filled novels that will keep you turning the pages until you get to the end. Enjoy!

The Cartographers by Peng Shepherd – When Nell Young’s estranged father, a renowned cartographer, is found dead in the New York Public Library where he works, she discovers that he was clutching the very same basic gas station map that caused their falling out years before. Curious about the importance of the map and its potential link to her father’s death, Nell conducts research and discovers that the map is exceedingly rare, in fact it is the only one left of its kind because an unknown collector has destroyed everyone but the one her father owned. Baffled by this bizarre discovery, Nell sets out to uncover the secrets behind the map. This unique and creative tale is a page turner with an intelligent and engaging plot; I highly recommend it.

A Solitude of Wolverines by Alice Henderson – The first installment in a new series, this fast-paced mystery stars wildlife biologist Alex Carter, who is hired by The Land Trust for Wildlife Conservation (LTWC) to study the wolverine population on a preserve in Montana. For decades, a ski resort operated on the land until it was abandoned in the 1990s, and the owner later donated the property to the LTWC. LTWC seeks to determine if wolverines, a threatened species, are still living on the preserve. Alex finds herself housed at the derelict Snowline Resort lodge, a clever setting that ramps up the creepiness factor. While reviewing footage from cameras used to track the wolverines, Carter comes across images of a severely injured man. Eventually, she realizes she has stumbled into the crosshairs of an illegal operation. A Solitude of Wolverines will appeal to anyone who likes an intelligent and timely read.

The Sun Down Motel by Simone St. James - The Sun Down Motel is a creepy, rundown motel serving as a pit stop for travelers on their way through Fell, New York that also provides a place for locals to hide out. But as Viv and Carly, two women 35 years apart, learn there is someone or something else living at the Sun Down, and they both are determined to find out who or what is haunting the motel and why. St. James’ pacing is perfect, and the book is awesomely creepy but not overly scary. The Sun Down Motel is a fabulous read - the characters are so well developed, and I rooted for both Viv and Carly as they sought to understand what was happening at The Sun Down Motel.

The Survivors by Jane Harper - Jane Harper returns with another stunning and well-paced Australian mystery, this time choosing Southern-most Tasmania as her setting. After a long absence, protagonist Kieran Elliott returns home to Evelyn Bay for a visit to help care for his ailing father. When he was twelve, an accident led to the death of Kieran’s brother Finn and his friend, and the town felt Kieran was partly responsible for the tragedy. His arrival is met with disdain and when a murder occurs, Kiernan is dragged back into the tragic events of the past. Part character study, part mystery, The Survivors showcases Harper’s stellar writing style, and her vivid imagery helps to immerse the reader in the atmospheric and gloomy setting.

Take Your Breath Away by Linwood Barclay - The premise for this fabulous thriller immediately grabbed me: One weekend, while Andrew Mason was away on a fishing trip, his wife, Brie, disappeared without a trace. Almost everyone believed that Andy murdered her, but no one could prove it, and the police didn’t have enough evidence to charge him. Now, six years later, a woman who looks remarkably like Brie shows up at his old address where his former house has been torn down and replaced, screaming, ‘Where’s my house? What’s happened to my house?' And then, just as quickly as she arrived, the woman vanishes. Andrew is thrown back into the spotlight as the police begin to investigate the cold case again. I read this book so quickly and thought it was an engaging and compelling thriller with an ending that made sense and fit the story very well.