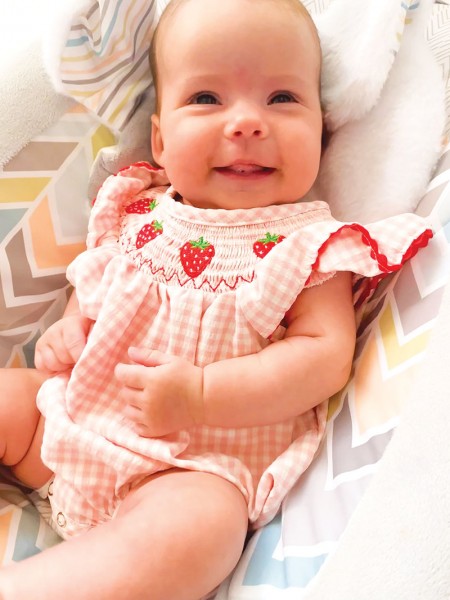 PARENTS HELPING PARENTS During this year’s formula shortage, parents have been helping to share resources, such as posting photos of baby aisles in stores onto local Facebook groups. New mom Avery Bullock (to baby Louisa, pictured at 4 months) has passed on all free samples she has received to other moms in need.

Buzz Baby is a column about life with babies. Writer Annie McQueen is a mother of four children 7 and under.

Crystal Lazo, mother of three, has found herself in the stressful situation millions of other parents are in – worried about the current formula shortage.

Shelves on the baby aisles were often empty as the shortage regularly made breaking headline news. Parents did not know when or how they would find the formula they needed. Even hospitals have experienced shortages.

Amidst the crisis, Buzz neighbors stepped forward and helped navigate the scary road together.

Crystal’s son, Cooper, is 9 months and requires a special formula for his acid reflux. He drinks Similac Alimentum ready-to-feed formula.

Crystal noticed the formula – which was already hard to find in stores – was mostly sold out in the stores, so she took to the internet. She found an Amazon store that was selling it.

As she held her breath, each shipment arrived on time at her house, and she would immediately order more. Helpful family members and friends inquired about what kind of formula Cooper needed so they could keep an eye out in stores as well.

Circumstances changed when Cooper got sick with a stomach virus. Their pediatrician recommended switching to a milder formula until he was better. Crystal wondered whether she would be able to find the new formula.

She immediately visited the nearest Wal-Mart and found some cans on the shelves. They had a purchase limit of two, so she picked those up and made a plan to return as soon as he ran out.

Crystal says she has wanted to be a helper in this crisis, so she goes out of her way to check the baby aisle when she takes trips to places such as Whole Foods or H-E-B (even when she is not looking for formula for Cooper). She shares what she sees with other parents online. “I posted on my local mom’s Facebook group when I saw some formula available in a store,” said Crystal.

She also passed out a free sample she had received in the mail of another specialty formula called Nutramigen. She did not need the formula for Cooper, so she posted that it was available for a free porch pick-up. A local mom was in desperate need of it and came to pick it up. She says it feels good to know she can help in a small way.

New mother and realtor Mollie Steele and her husband Andrew welcomed their first child, son Forest, now 7 months. Forest is formula fed and Mollie knew she needed to have a plan of action when the shortage started. She and her husband have made it part of their “new normal” to make trips to multiple stores. She said recently she opened the last can they had on stock, so it was time to head out to go find it.

She recalled a moment in which the reality of the formula shortage sunk in – checking out at a CVS and witnessing a frantic mom looking for a certain type of formula for her young baby.

Avery Bullock, a new mom, has not needed formula for her infant Louisa, who is now 4 months. Louisa is currently breastfed, but Avery has been helping other moms in any way she can. “It has been scary to see other moms struggle to find the formulas that work for their babies,” said Avery.

Avery belongs to several mom groups on Facebook and says that she has seen members of the group posting about shipping formula across the country to help other parents. “It is wild that parents are having to go to such great lengths to feed their babies,” said Avery. She passed along her free samples to a local mom, too.

One Buzz mom, who opted to stay anonymous, has been donating her extra breastmilk to a milk bank during the shortage. She is a big fan of the app called Breastaurant, a locator app to donate, buy, or receive donor milk. It was created by a single mom last year and it has exploded during the shortage.

She works full-time as a speech pathologist and dedicates extra time to help donate her oversupply to other moms in need. She says it is the best way to spend her extra time. “It is all about moms helping other moms for our babies,” she said.

Editor’s note: We’re hoping by the time this issue hits mailboxes, store shelves will be stocked with formula of all kinds. If you’ve heard of neighbors helping neighbors amidst the formula shortage or have any special parenting-related stories, let us know. Email [email protected].

9:30 am to 3:00 pm
Location:
Cultural Center Our Texas
END_OF_DOCUMENT_TOKEN_TO_BE_REPLACED