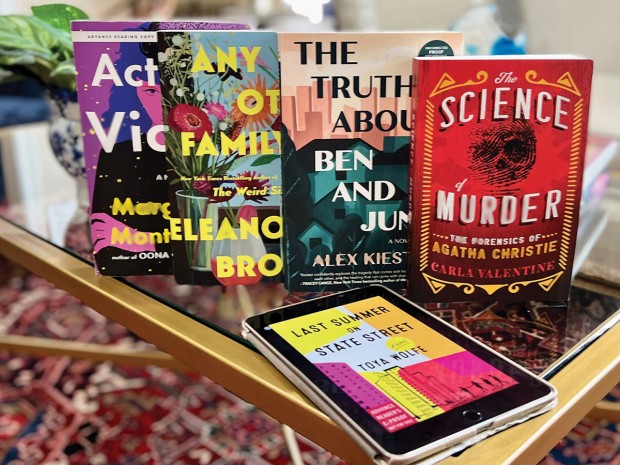 WHAT TO READ This month’s picks include a captivating magical-realism novel, a beautiful read on the concept of family, a compelling coming-of-age story set in Chicago in 1999, a fascinating look at how novelist Agatha Christie wove cutting-edge science into her mysteries, and a thought-provoking novel about marriage. (Photo: Cindy Burnett)

Acts of Violet by Margarita Montimore – This engrossing and inventive tale focuses on magician Violet Volk who vanished mid-act a decade previously. Violet has not been seen since, and over those 10 years, her fans’ devotion to her has only grown stronger. Violet’s sister Sasha abhors the spotlight created by her sister’s mysterious disappearance, but she is unable to avoid the attention created by her famous sister. As the 10-year anniversary of her disappearance approaches, the host of a podcast devoted to Violet seeks to finally draw Sasha into the limelight to hear her thoughts on what really happened to Violet, but Sasha is not anxious to address her contentious relationship with her sister. The book’s creative use of podcast transcripts, emails, newspaper articles and more propels the story along, and wanting to know what really happened to Violet kept me madly turning the pages in this creative and compelling magical-realism novel. Montimore kept me guessing and the pacing of the book is perfect – the right amount of information is released at just the right time as the story progresses.

Any Other Family by Eleanor Brown – This novel is a beautiful reflection on the concept of family. Three sets of parents are tied to each other through the biological siblings that they each adopt after the death of the children’s grandmother. In an effort to ensure that the siblings remain close, the parents agree to create their own “family” for these kids, sharing Sunday dinners, celebrating birthdays and holidays together, and even taking a joint vacation. The three adoptive mothers are very different from each other, and the book focuses on each of them, their approach to motherhood and how they interact with each other and work to keep their fragile family bonds intact. While the group is on their shared vacation, the children’s birth mother surprises them with the news that she is pregnant again and wants help finding a family to adopt the latest baby, and this bombshell threatens to destroy what the group has created. At times, I identified with each of the three adoptive mothers and also felt for each of them. The women all want to do what is best for the children as well as trying to help them maintain relationships with each other. This will be one of my top reads of the year, and I have not stopped thinking about it since I finished it.

Last Summer on State Street by Toya Wolfe – This coming-of-age story stars a 12-year-old girl named Fe Fe Stevens who lives in the Robert Taylor Homes on the south side of Chicago in 1999, right as the buildings are slowly being torn down by the Chicago Housing Authority. Her building is next in line to come down, and for a brief time she forms an alliance with two other girls in her building – one the daughter of deeply religious parents and the other a member of the family who runs the gang that “protects” her building. But as the summer progresses and the building begins to empty, her relationship with the two girls follows a similar course. The author herself lived in the Robert Taylor Homes, a public housing complex of over 20 high-rise buildings, built to house low-income families in Chicago. The story is engaging, heartbreaking, and compelling, and Wolfe vividly depicts what it was like to live there: the daily gun battles, the dangers involved in taking the elevator or the stairs, the lack of lighting provided, and more.

The Science of Murder: The Forensics of Agatha Christie by Carla Valentine – Agatha Christie will forever be associated with the mystery genre and her impact on it is undisputed. Her novels almost always include dead bodies who have frequently met gruesome endings. While the term “forensics” was not in use then, Christie applied many of the methods that are used in forensic science today to help solve her crimes. As her stories unfold, she demonstrates her knowledge of the aspects of crime detection that were employed for crime detection in the early 1900s. Valentine charts the development of various techniques from that era and how quickly those methods were incorporated into Christie’s books. This is an absolutely fascinating look at how Agatha Christie wove the cutting-edge science of her time into her novels. I was so intrigued that I could not put this one down; it is such an interesting premise.

The Truth about Ben and June by Alex Kiester – Austinite Alex Kiester crafts a thoughtful exploration about the roles of women versus men in marriage, the way in which children change a marriage, and how the choices we make at various stages in our life impact us for years to come. Ben and June’s relationship has seemed like a fairy tale since they met, but after their child arrives things begin to falter. June wonders about the path she abandoned and worries, as she listens to other moms discuss their children, that she does not have the same feelings about motherhood. When Ben wakes up one morning to the sound of his baby’s cries, he is stunned to discover that June is gone. As he works to unravel June’s disappearance, Ben slowly realizes that there is much about June that he doesn’t know. This book would make a fabulous book club selection because there is much to discuss.