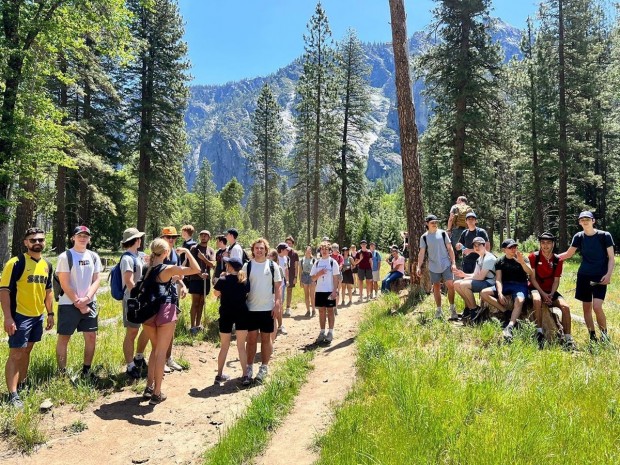 The Year 12s hiking through Yosemite on their first day.

Recently, students in Year 12 at the British International School of Houston (BIS Houston) had the opportunity to travel to California for a school trip. While there for a week, they were able to explore Yosemite National Park as well as the city of San Francisco.

On the first day, the Year 12s awoke far too early in order to get to the airport by 3:30 a.m. for a 5 a.m. flight. Around 30 half-asleep students milled around the Hobby International Airport terminal in preparation for their flight, finding renewed strength from the refreshing drinks and warm food at nearby fast-food places and cafés.

A four-hour flight into Oakland was followed by a bus ride to get a late bagel breakfast before driving for hours to reach the hotel we would be staying at while visiting Yosemite. The travelling took a lot out of us but once we arrived at the hotel, everyone was excited to get the trip started and quickly changed into swimsuits to take advantage of the hotel’s pool before a pizza dinner.

Waking up a few hours later than the day before, the next day began with the over an hour drive into the park where we were met with spectacular sights as we viewed Yosemite for the first time. Surrounded by trees and waterfalls and cliffs, we were in awe of all the impressive nature around us.

To begin with, we spent our initiation into Yosemite just exploring the area through a relaxing walk and even taking our shoes off to wade into freezing cold water—an activity that we would repeat every chance we got. The afternoon found us divided into groups, one of which that wanted to crawl through tight caves aptly named the "spider caves" and then go on a hike up the mountain to get a view of a spectacular waterfall, another that preferred a more gentle and educational stroll through the area. Everybody loved the group they took part in and after we were all properly exhausted and much more subdued than the previous day on the way back to the hotel.

Switching after lunch, the less strenuous hikers followed the same trail as the strenuous hikers but stopped just short of the end of the other hike, choosing to stay at a bridge rather than hike the flight of stairs to the waterfall. Finally, a quick turnaround at the hotel found the Year 12s refreshed and ready for dinner at a local Mexican restaurant.

The last day in Yosemite came too soon as the students found themselves hiking to the self-explanatory "Mirror Lake" where they filmed videos of their time and swam in icy waters composed of snow melt. Some of the more daring members took advantage of a huge rock to jump and fully submerge into the lake. The final activity would be a hike to visit Yosemite’s famous sequoia trees whose thick trunks would take several people to encircle before driving the long distance to San Francisco. 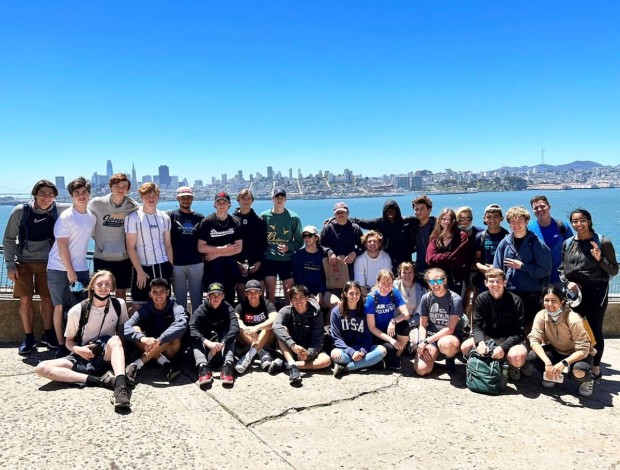 The Year 12s on Alcatraz Island with the San Francisco skyline in the background.

Our trip was almost to an end, but we still had one more day and we were going to take advantage of all we could in the amazing city of San Francisco. We began by taking the ferry to tour Alcatraz and then had lunch at the pier. Walking around the beautiful and vibrant pier was an experience all in itself and I know that everyone wished they could have spent more time there. Dividing in two once again, some waited for the quintessential San Franciscan cable car experience while others strode ahead and fully immersed themselves in the city by walking through its many neighborhoods. We roamed the city and did some shopping before reuniting for dinner at a gorgeous food truck area surrounding by many passionate sports fans in town for a big rivalry game.

It was almost time to return to the airport after a very long day, but before we could do that, we had one last stop at a windy overlook point from which we had the most beautiful views to say goodbye to the city from. All in all, it was the perfect way to end our time in California.

Christina M. reflects on her experience, stating, “Yosemite was an incredible experience. I got to know people so much better, spending time with them outdoors and creating memories for a lifetime! Also getting to go outside my comfort zone and doing things I wouldn’t have done otherwise was a rewarding challenge and I am so grateful to have gotten to go.”

Once again entering the airport half-asleep, the group meandered their way through security and to our gate before buckling in for another four-hour flight back to Houston. Groggy at 6am in the morning with very little sleep, but pleased with the last few days, the Year 12s said goodbye to their friends and classmates and made their ways home with most planning to sleep the rest of the day to recover. I know that everyone had an amazing time in spite of the exhaustion and would all absolutely do it again.