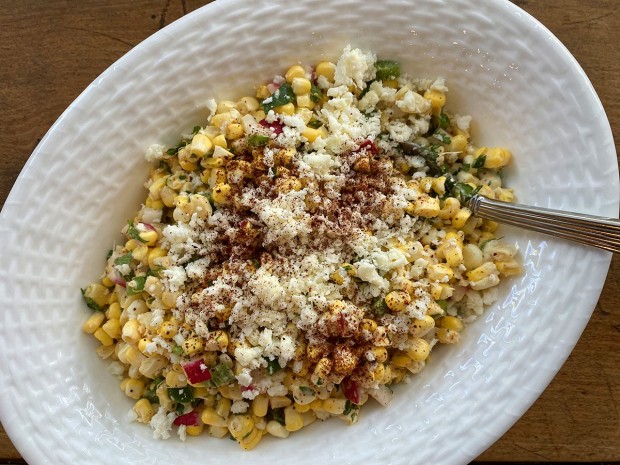 A lighter version of Mexican Street Corn, Chili Lime Corn Salad combines fresh summer corn cut straight from the cob, tossed with lime, chili powder, crunchy radishes, and a little jalapeño. Add a teaspoon of mayo to hold it all together and top it off with a sprinkle of cotija cheese.

Chili Lime Corn Salad began with the idea of making a lighter version of Mexican Street Corn. We all love the grilled, tangy street corn that is slathered in a mix of mayonnaise and sour cream and sprinkled with cotija cheese and cilantro. On the cob or off (hello, Torchy’s), street corn is one of those things we could eat in regular rotation.

Thinking about a regular rotation, we wanted something just a little lighter on the mayo and sour cream. Something less creamy but just as yummy. Something that was more about the corn than the sauce.

Chili Lime Corn Salad is our answer. Here is fresh summer corn cut straight from the cob, uncooked and crisp, tossed with lime, chili powder, crunchy radishes, and a little jalapeño. We add a mere teaspoon of mayonnaise to hold it all together, and sprinkle on cotija cheese. So yum.

In a medium bowl, toss together the corn, cilantro, radishes, scallion, and jalapeño. Fold in the mayonnaise to incorporate it evenly, then stir in the cayenne, chili powder, and lime juice. Sprinkle with the cotija cheese, then sprinkle a little more chili powder over the top.