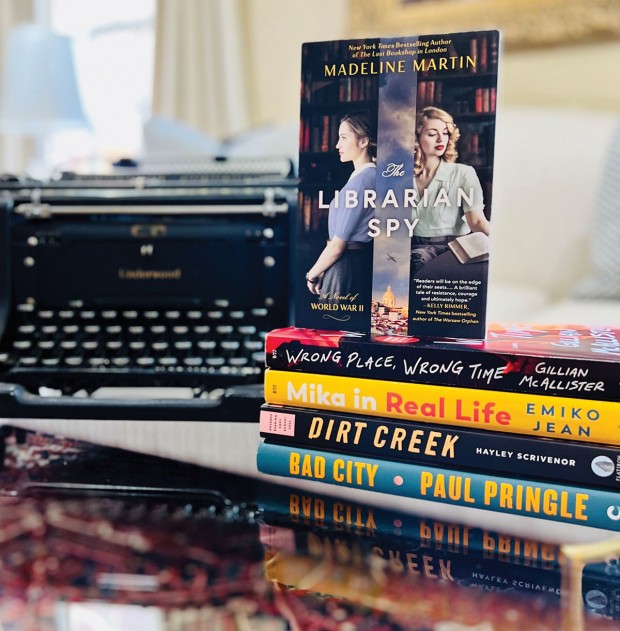 WHAT TO READ This month’s picks include an engaging story about adoption and secrets, two page-turning thrillers, historical fiction set in Lisbon, Portugal and Lyon, France during World War II, and a fascinating nonfiction book based on scandals at USC.

Bad City: Peril and Power in the City of Angels by Paul Pringle – Bad City is a riveting and horrifying look at the way USC’s administration prioritized the school’s reputation over its students and the surrounding community. In 2016, an LA Times reporter received a tip about a woman who overdosed at a local hotel and the role that Dr. Carmen Puliafito, the dean of USC’s Keck School of Medicine, played in the overdose. Not aware yet of the can of worms he would ultimately open, Paul Pringle began looking into the event. By the time he was finished several years later, he had exposed corruption at the highest levels at USC and at the LA Times. The dean not only did meth and other drugs regularly himself (and was so sure he would not be punished he videoed and photographed himself doing so), but he befriended women in their 20s and provided them drugs and money. Repeated complaints to USC’s Provost C.L. Max Nikias yielded not even one response except to the editor of the LA Times who then scolded the reporters. Subsequently, Paul and his group learned about a male gynecologist who worked at the student clinic and had been molesting students for decades with no punishment. The reporters then proved that the administration was aware of this behavior as well. After the stories ran, the group ended up winning a Pulitzer Prize for bringing the second story to light. While it is a tough read at times, Bad City vividly demonstrates the continued importance of investigative journalism.

Dirt Creek by Hayley Scrivenor – Dirt Creek is a slow-burn mystery about the murder of a 12-year-old girl in a small town in rural Australia, and the repercussions on the community, its families, and the children living there. The story is told using multiple points of view punctuated by a Greek chorus giving voice to the town’s remaining children. Durton, nicknamed Dirt Creek, is a small town whose residents are hiding numerous secrets. When 12-year-old Esther doesn’t return home after school, Durton’s residents are sent into a tailspin obsessing about how such a thing could happen in their town. When the police arrive and begin working the case by organizing searches with local volunteers and interviewing everyone in the town, it quickly becomes clear that everything is not as it seems. Scrivenor weaves an engrossing tale of being in the wrong place at the wrong time, and of how the choices we make have long-lasting consequences.

The Librarian Spy by Madeline Martin – The Librarian Spy takes place in Lisbon, Portugal and Lyon, France during World War II. Ava works as a librarian at the Library of Congress until she is recruited by the U.S. military to spy during World War II. She is sent to Lisbon to pose as a librarian while gathering intel for the war effort. Meanwhile, Elaine is working in Lyon helping to operate a printing press run by the French Resistance, but the Nazis are frantically searching to locate the press and silence the printer. As the war continues, the two women begin communicating through coded messages as they each work to help the Allies win the war. While many historical fiction books are set during World War II, few address what life was like in Portugal during that time period. Since Portugal was neutral during the war, life there was drastically different than most of Europe, and Martin vividly depicts this in her compelling, heartbreaking, and entertaining tale.

Mika in Real Life by Emiko Jean – Recently fired from her job and single after her last relationship blew up, Mika cannot seem to get her life together. When Penny, the daughter she gave up for adoption 16 years ago, contacts her and wants to forge a relationship with her, Mika invents a much better life for herself in order to impress her daughter. What starts out as a white lie blooms into an entirely new, and fake, existence for Mika. However, when she meets Penny’s widowed father and their initially contentious relationship develops into something more, her lies threaten to catch up with her. Mika in Real Life had me cheering for Mika as she struggled with the weight of her choices, the secrets she held, and what it means to be a mother.

Wrong Place Wrong Time by Gillian McAllister – As the book opens, Jen witnesses her 18-year-old son Todd murdering a complete stranger in the middle of the night right in front of their house. Devastated that her son, with whom she is close, has taken someone’s life, Jen cries herself to sleep on her sofa. The following morning, Jen wakes up anxious to begin understanding why her son committed this horrific crime but instead finds herself not on the morning after the crime, but the morning before it happened. Each night she goes to sleep, she wakes up further back in time. Jen begins to realize that each day she lands on is teaching her something about the events that lead up to her son’s actions as she continues to search for why this all occurred and, more importantly, search for how to stop it from happening. Wrong Place Wrong Time is an intelligent and compulsive read that kept me turning the pages through all sorts of twists and turns and is the best thriller that I have read in a long time.