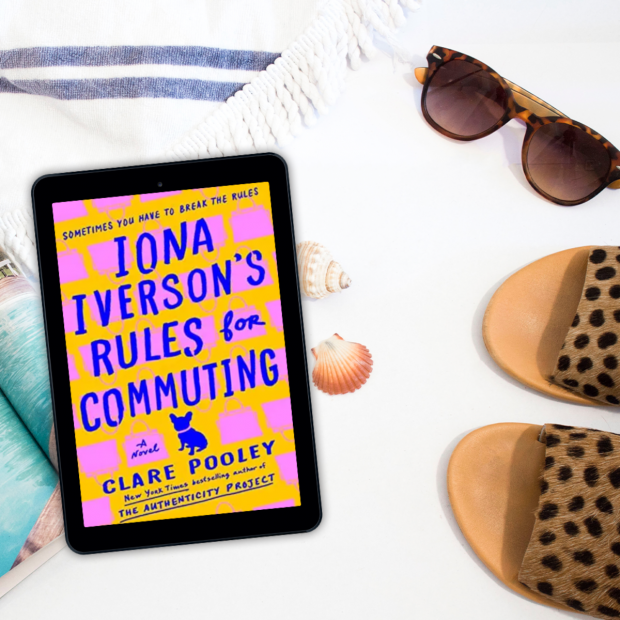 Iona Iverson’s Rules for Commuting by Clare Pooley is among Cindy Burnett's top 10 reads of 2022, so far.

In April, I highlighted my favorite reads for the first quarter of 2022. Five of those books are on the list at the midyear point as well as five books that came out between April and June. 2022 has been a fabulous year for books so far.

I love reflecting on the books that stand out to me and evaluating what I am reading. My list didn’t change as much as I thought it might because I read some really fabulous books in the first quarter of 2022. And unlike the first quarter where there were several people I had not interviewed, I have chatted with every one of these authors for my podcast. I am very curious to see how that trend continues as the year continues.

Here are my top ten reads for the first half of 2022 in the order they published:

Love & Saffron by Kim Fay – I just loved this book so much. Written in epistolary format and set in the 1960s, this beautiful book tracks the friendship between two women, Imogen and Joan, as they get to know each other through letters. Imogen Fortier is a longtime columnist for a magazine and lives on Camano Island near Seattle. Joan, who is younger, is a new food columnist in Los Angeles. When Joan writes Imogen a fan letter and encloses a recipe and some saffron, the women begin a correspondence that develops into a wonderful relationship. Incorporating the history of the era, food, and personal tidbits, the women bond and become close friends as they correspond about their lives. This novel is filled to the brim with humor and heart and is a joy from start to finish.

I Must Betray You by Ruta Sepetys – I have been recommending this book to everyone I know. And in light of the invasion of Ukraine by Russia – the book’s premise is even more relevant. This historical thriller is set during the time period leading up to Romania’s 1989 revolution and the ousting of its charismatic but brutal leader, Nicolae Ceausescu. Insulated and living in constant fear, Romanians must survive under the oppressive regime that governs their country. There is little food, the electricity is randomly turned off and on, no outside media is allowed, and everyone worries about who they can trust and who they cannot, even family members are suspect. Sepetys vividly depicts life there during this time period, a period many will be unfamiliar with, and how one man managed to fool the world for far too long. I have not stopped thinking about this book since I finished it, and it will definitely be one of my top reads of the year; it is truly stunning.

The Unsinkable Greta James by Jennifer E. Smith – This is another fabulous read. I love books about musicians and the setting of an Alaskan cruise made this a must read for me. Following a public breakdown brought on by the sudden death of her mother, indie musician Greta James agrees to accompany her father on a cruise to Alaska. They have always had a tense relationship, and while she was alive, Greta’s mother, her biggest fan, had helped Greta and her father Conrad communicate with each other. With her gone, the pair struggles to bridge the divide between them especially in the face of their shared grief. Both hope the cruise to Alaska will help them learn to understand each other. In addition to trying to repair her relationship with her father, Greta is working on her sophomore album, dealing with fans on the cruise ship, re-evaluating her current relationship, and trying to recover from her public meltdown. This beautiful novel is a story about repairing relationships, finding your joy, and living life to the fullest. I absolutely loved this one and highly, highly recommend it.

Woman on Fire by Lisa Barr – After fledgling reporter Jules Roth talks her way into a job with Dan Mansfield, Chicago’s preeminent investigative reporter, he assigns her to a top-secret story, locating “Woman on Fire,” a very valuable painting stolen by the Nazis during World War 2. But Jules doesn’t have much time because the man Dan is helping find the painting is dying. In Europe, heiress and art collector Margaux de Laurent hunts for the same painting and will stop at nothing to find it. As Jules gets drawn into the dangerous and seductive art world of the uber-wealthy, she uncovers secrets and betrayals while becoming intrigued with the painting at the center of the drama. There are some fabulous twists and turns combined with a stellar plot and an intriguing cast of characters. This thriller that kept me on the edge of my seat the entire time I was reading it.

The White Girl by Tony Birch – The White Girl is set in the 1960s Australian town of Deane, a fictional town representative of every small town in Australia. Odette Brown and her fair-skinned granddaughter Sissy live in the Aboriginal section of the town, Quarrytown, and are subject to the restrictions placed on them by the welfare authorities. When a new policeman arrives, Odette realizes that Sissy is in danger of being taken from her with absolutely no recourse on Odette’s part because during this time period Aboriginal people could not be Australian citizens nor make basic decisions for themselves such as when and where to travel or what job they will hold. Birch vividly describes what it was like to live as an Aboriginal person then and the countless hardships they endured while also weaving in a beautiful tale of family and the lengths people will go to in order to protect each other. I loved Odette, and her strength and perseverance against all odds will stay with me for a very long time.

Take My Hand by Dolen Perkins-Valdez – In this dual timeline historical-fiction story, Civil Townsend hopes to make a difference in her community by working as a nurse at the Montgomery Family Planning Clinic, a birth control clinic, in 1970s Alabama and serving those desperately in need of care. But when one of her first jobs involves putting 11- and 13-year-old girls on birth control when neither girl has even kissed a boy, Civil is compelled to fight this injustice. Years later, Dr. Townsend is ready to retire but these stories from her past refuse to stay hidden when she finds herself having to explain to her daughter what happened and why. This incredibly sad story highlights what happens when those in charge think they know what is best and take matters into their own hands. 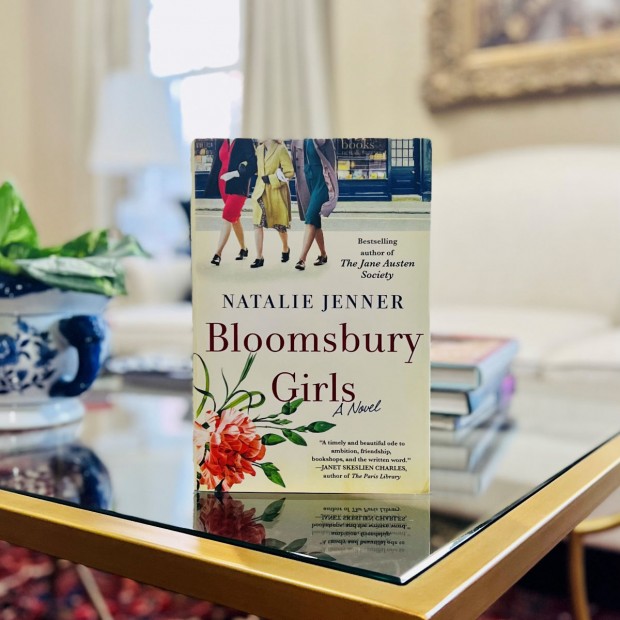 Bloomsbury Girls by Natalie Jenner – in 1950s London, Bloomsbury Books, a bookstore that sells new and rare books and that has existed for over a century, is run by men and guided by the general manager’s 51 rules. But following World War 2, Vivien, Grace and Evie, three strong women working at the store, strive to modernize the store’s ways and chart their own paths in a male-dominated world. Interacting with literary greats such as Daphne de Maurier, Ellen Doubleday, Peggy Guggenheim and more, these three women push the boundaries of the early 1950s. I loved everything about this one from the literary setting to the characters to the book’s resolution.

Iona Iverson’s Rules for Commuting by Clare Pooley - Magazine columnist Iona Iverson rides the train to and from work every day, seeing the same people to whom she has privately given nicknames such as Mr. Too-Good-To-Be-True and Smart-But-Sexist-Manspreader. None of the commuters ever speak to one another until the day when one of them chokes on food and is saved by another rider. This incident makes Iona realize that she wants to learn more about her fellow riders and she begins to develop relationships with them as she rides, inserting herself into their issues, helping solve their problems and even becoming friends with some of them. I loved the characters and the way they develop, interact, and come together, the stellar writing, the story line and the ending. Infused with heart and humor, this book demonstrates the importance of community and the ability of relationships to change people's lives while also serving as a reminder that people should not be judged by their appearance. I highly recommend this gem of a book and was so sad when it ended.

Nora Goes Off Script by Annabel Monaghan - In this absolutely delightful romantic comedy, Nora Hamilton writes formulaic scripts for a Hallmark-like channel. But when her husband leaves her and her two children, she mines her experiences and creates a fabulous script that gets picked up for the big screen. The movie is filmed at her home, and Leo Vance, America’s heartthrob, is cast as Nora’s worthless husband. But when filming wraps, Leo asks if he can stay on as a renter for a week to enjoy the peace and quiet and against her better judgment she agrees. No one is more surprised than Nora when Leo bonds with her kids and runs errands with her in town. Monaghan creates a heartwarming, hilarious, and charming story that kept me completely engaged in the story as I rooted for Leo and Nora. It is an entertaining and fun book that I read in less than a day.

The Local by Joey Hartstone – When author Joey Hartstone learned that the small East Texas town of Marshall is improbably one of the most popular places in the United States to argue patent cases, he knew he needed to set a legal thriller there. The Local follows attorney James Euchre who serves as local counsel to the patent attorneys who file hundreds of case a year in Marshall. When Amir Zawar, one of his patent clients, ends up charged with the murder of the local judge, the client demands that Euchre defend him. With the help of a former prosecutor, he agrees to defend Zawar and gets dragged into the world of criminal defense. This unique and fast-paced legal thriller kept me on the edge of my seat, and I particularly loved the patent law aspects of the story. I had no idea that Marshall, Texas was such a hotbed of patent law and loved learning about that and how it impacts both the town and the surrounding area.

12:00 pm to 5:00 pm
Location:
The Galleria, Level One between Nordstrom and Macy's
END_OF_DOCUMENT_TOKEN_TO_BE_REPLACED