The Soundtrack of My Life: Connecting through Music, Vinyl Records 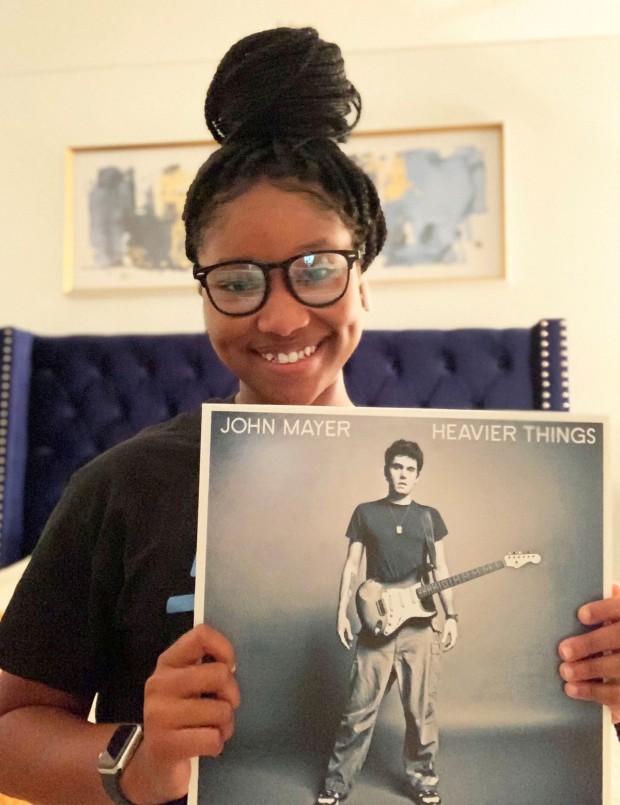 Buzz summer intern Raigan Clay, an incoming senior at Episcopal High School, shares why she loves vinyl records. Here, she's holding her newest addition to her vinyl collection, "Heavier Things" by John Mayer, who's one of her dad's favorite artists.

Growing up, I was surrounded by great music. Many of my family members have a passion for music. I remember spending time at my aunt’s house with my brother and I was always so intrigued by her collection of vinyls. I would beg her to play her records for me because I was so curious as to how this disk was able to play music. She has almost all of Michael Jackson’s discography, Whitney Houston, The Commodores, and Kendrick Lamar.

My aunt has great music taste and the vinyls she had along with music she would play me growing up definitely has shaped the music I listen to today. Now the shoe is on the other foot – I find myself sending her new music I find all the time.

I think my dad has had the most influence on me when it comes to the music I have grown to love. I remember going on beach trips with my dad and, during the drive, the soundtrack was a mix of John Mayer, Lenny Kravitz, The Feeling, and Michael Franks. These are some of my dad’s favorite artists and I wasn’t able to fully appreciate them until I grew up a little bit.

While my dad doesn’t have any vinyls now, he used to collect them when he was my age when they were about five dollars to buy. (What a dream!)

I started buying vinyls last Christmas when I got my record player. I started collecting vinyls because I think it’s a very authentic way of interacting with music. The feeling I get when I’ve had a great day and get to play my favorite album – “Flower Boy” by Tyler, The Creator – on vinyl is electric. Yes, in theory, I could just connect my speaker to my phone and play music, but it doesn’t give me the same warmth as playing my records. When it comes to music, it’s all about how it makes you feel and the energy you’re trying to curate for yourself.

For instance, when I’m feeling down, I normally choose to let myself feel those emotions completely, so I would play my record “When We All Fall Asleep Where Do We Go” by Billie Eilish. But I’m over the moon about something, then I would play a record like “Call Me If You Get Lost” by Tyler, The Creator. (Fun fact: I bought this vinyl on the one-year anniversary of the album being released.)

I try to create an energy based off what I’m feeling; I try to use music as the soundtrack to my life. While my record collection is small, I’m working on expanding it and filling it with albums that have shaped my life through the years. Currently, I have: “Call Me If You Get Lost” by Tyler, The Creator, “When We All Fall Asleep Where Do We Go” by Billie Eilish, “Heavier Things” by John Mayer, and my favorite album of all time “Flower Boy” by Tyler, The Creator. Some records I’m hoping to buy are “Getz/Gilberto” by Stan Getz and João Gilberto (this album has me and my dad’s favorite song on it: “The Girl From Ipanema”), “30” by Adele, “In My Mind” by Pharrell Williams, “Igor” by Tyler, The Creator, and “When I Get Home” by Solange.

Just last week, I went to my favorite record shop downtown called Sigs Lagoon with my dad and I purchased John Mayer’s “Heavier Things” on vinyl. I always go to the record shop with my dad but that day I felt it was important for my dad to be there with me when I bought this album because he knows how important music is to me and I wanted to pay homage to him. I wanted to show him that all of those years of him playing me the music he loves I was actually listening.

My dream is to have a wall full of records and to be able to pass them down to my kids one day. I want to share my music with them so that they can have the same meaningful experience I have had with my dad. Without the musical influence from my dad, aunt, and uncles I wouldn’t have the same passion that have for music now. By exposing me to such great music at a young age my family cultivated my relationship with music that has now shaped my life.

Editor's note: For more music musings by Raigan, read Where's all the Music?: Song of Summer '22.

10:00 am to 4:00 pm
Location:
The Heritage Society
END_OF_DOCUMENT_TOKEN_TO_BE_REPLACED