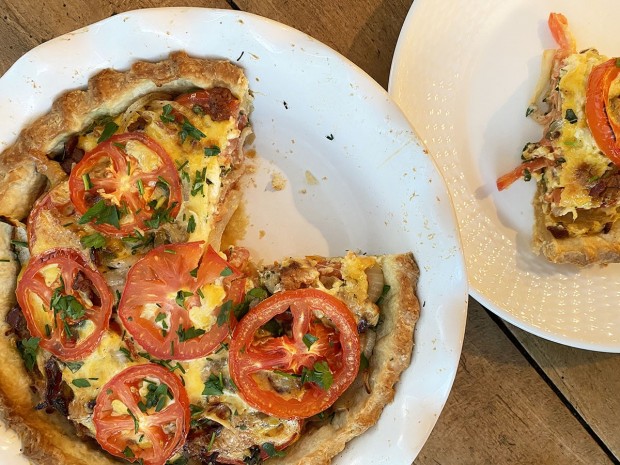 A tomato pie is the quintessential southern summer supper (or lunch or brunch). Alongside grilled chicken, or a salad, or on its own, tomato pie is simultaneously bright and rich. Sunny and juicy, thanks to ripe summer tomatoes, savory and satisfying, thanks to bacon and melty cheese.

Our Summer Tomato, Herb, and Bacon Pie calls for tomato slices to sit with salt between layers of paper towels – this removes some of the tomatoes’ liquid, so that the crust isn’t soggy and the filling isn’t watery. Still, the cooked tomatoes are just the right amount of juicy, kind of like the tomatoes in the best margherita pizza. Herbs create a fresh-tasting pie, and mayonnaise and a little dry mustard give it all the slightest quiet tang.

Summer Tomato, Herb, and Bacon Pie is wonderful just after it’s made. Leftovers, cold, also make a lunch you’ll want to stay home for. Or consider serving the pie cut into squares and tucked into a brunch buffet.

Preheat the oven to 350 degrees. Cook the bacon over medium heat in a large skillet for about 8 minutes, or until crisp. Using a slotted spoon, remove the bacon and place it on a paper towel-lined plate. Remove all but 1 tablespoon of the bacon fat from the skillet.

In the same skillet over medium-low heat, season the onion with a little salt and cook for about 30 minutes, stirring occasionally, until it is soft and caramelized.

Beat the egg in a small bowl, then stir in the mayonnaise and dry mustard. Once combined, stir in the cheddar, parmesan, and fontina.

Line the bottom of the pie crust with 1/3 of the tomatoes, then season them with salt and pepper. Top with half the onions, then half the bacon, then half the chopped herbs. Spread half the egg-cheese mixture over. Repeat with another 1/3 of the tomatoes and the remaining onions, bacon, herbs, and cheese (reserve about a tablespoon of the herbs for garnish). Top the pie with a single layer of sliced tomatoes.

Bake the pie for 40 minutes, or until the top begins to brown and bubble. Let it sit for at least 10 minutes before serving. Serve warm, at room temperature, or cold, sprinkled with some of the chopped herbs.