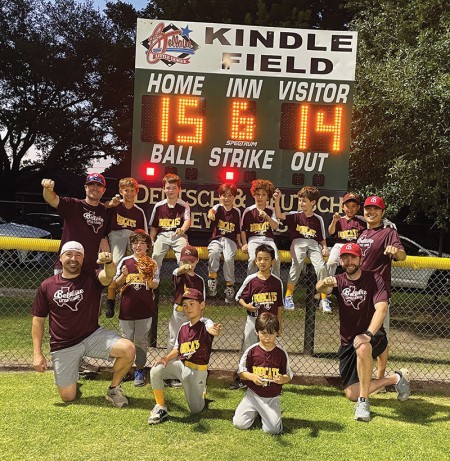 The Bellaire Little League Texas Bobcats brought home two championships this season after sharing the regular season championship with the Bearkats and winning out in the Texas League playoffs. The team was managed by Derek Sirmans and coached by Jeremy Crow, Jay LeJeune, and Peter Kim. The Bobcats had an epic seven-run comeback in the last inning of the semifinals against the Cardinals, and a seven-run comeback in the last two innings of the finals against the Tigers. The Bobcats thrilled fans and left every voice hoarse. Pictured (back row, from left) Jay LeJeune, Micah Taschery, Zachary LeJeune, Jack Mandel, Dillon Sirmans, Oliver Golenternek, Matthew Kim, Peter Kim, (front row, from left) Derek Sirmans, Connor Crow, Anthony LeJeune, Blake Whalen, Titus Huang, Max Mandel, and Jeremy Crow.