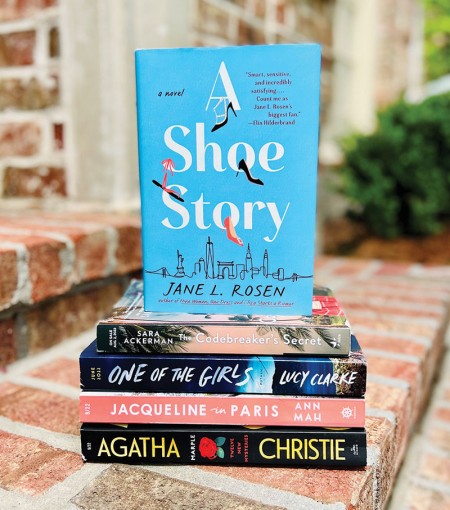 WHAT TO READ This month's selections include a fast-paced thriller set on a Greek island, two historical-fiction titles, one set during World War II and the other about Jacqueline Bouvier's time in Paris, a fun contemporary-fiction tale set in New York City centered around designer shoes, and a collection of new stories about Agatha Christie's Jane Marple. (Photo: Cindy Burnett)

The Codebreaker’s Secret by Sara Ackerman (historical fiction) – The Codebreaker’s Secret is a fabulous addition to the World War II historical fiction subgenre. After helping crack the German Enigma code, Isabel Cooper is sent to Pearl Harbor’s Station HYPO, its code breaking center, to help break the Japanese Magenta codes that are being grabbed from the airwaves in an attempt to win the war. Angry that her brother was killed in the attack on Pearl Harbor, Isabel believes the only way she can avenge her brother’s death is to crack these codes, but she quickly learns that life may have more in store for her when she meets her brother’s best friend, a pilot with his own secrets. Two decades later, a young journalist is sent to Hawaii to cover the opening of the Rockefeller’s latest project, the Mauna Kea Beach Hotel, and is roped into the hunt for a prominent guest who goes missing. While searching for the guest, she uncovers a wartime secret that she must work to unlock. This dual timeline tale merges together seamlessly, and the Hawaii setting and focus on breaking Japanese codes during the war make this a unique and worthwhile read.

Jacqueline in Paris by Ann Mah (historical fiction) – 20-year-old Jacqueline Bouvier spent her junior year abroad in postwar 1949-1950 Paris, and in Jacqueline in Paris, Mah brings to life Bouvier’s time there, and its impact on the rest of her life. Thrilled to be away from the societal pressure of New York and her mother’s prying eyes, Jacqueline falls in love with Paris’s social scene – the cafes, theatre, and art – while slowly realizing that the city is struggling with the aftermath of World War II. Spies abound while communism is taking a foothold in French politics, and no one is who they seem. Mah charts the beginning of Bouvier’s long love affair with Paris as well as bringing the City of Lights to life post-World War II. This beautifully written story transported me to a Paris with which I was unfamiliar and focused on a lesser-known time in Jackie Kennedy Onassis’s life that is often glossed over; this book will appeal to those who love historical fiction.

Marple: Twelve New Mysteries (short story collection) – Story collections by a group of authors on a shared topic are either fabulous or unexceptional. Marple: Twelve New Mysteries definitely falls in the former camp, mainly because of the all-star lineup of the 12 authors who contributed Miss Marple tales – Naomi Alderman, Leigh Bardugo, Alyssa Cole, Lucy Foley, Elly Griffiths, Natalie Haynes, Jean Kwok, Val McDermid, Karen M. McManus, Dreda Say Mitchell, Kate Mosse, and Ruth Ware. Each author creates their own take on Miss Marple and the settings, additional characters, and actual mysteries solved by Miss Marple vary widely which makes the collection very engaging to read. The authors clearly did their research on Miss Marple and the cases she solved, and it was so interesting to see the many different directions that they went with that knowledge. The definite standouts were the stories by Ruth Ware, Jean Kwok, and Elly Griffiths; a couple of the mysteries fell a little flat for me, but I think that is always the case in collections like these. Overall, it is a highly engaging book, particularly for those who love mysteries and Agatha Christie.

One of the Girls by Lucy Clarke (thriller) – Set on a fictional Greek island during a bachelorette party, One of the Girls follows six women who slowly realize they are stuck on the island with a murderer. Lexi invites five women to celebrate her upcoming nuptials, an eclectic group who all know Lexi well but who are not really friends with each other. They all have their own agenda, and as the story progresses, the women’s secrets are revealed as it slowly becomes clear that someone does not want Lexi to get married. The short chapters, stellar pacing, and sun-filled setting combine to make this page-turning thriller a compelling read.

A Shoe Story by Jane L. Rosen (contemporary fiction) – Following college, Esme put her life and dreams of moving to New York City and pursuing a career at an art gallery on hold to care for her father when he had a terrible car crash. Seven years later, she is offered a month-long job dog sitting in a beautiful Greenwich Village apartment. Even better, the apartment’s owner has an amazing collection of designer shoes, which Esme asks to borrow. Every day, she tries a new pair as she works to make friends, regain her old life, and decide how much of her old dreams are still relevant to her now. The added element of the fabulous shoes was a really fun addition, and each chapter is entitled a different pair of shoes, tying in that pair with what happens in each chapter. The intergenerational relationships, the focus on friendship, and the shoes make this a standout tale.