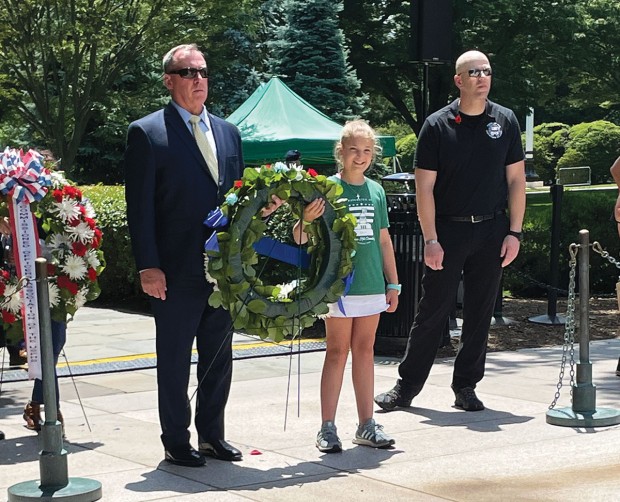 HONORING THE FALLEN Allison Cole, an incoming sixth grader at Memorial Middle School, had the opportunity to help Colonel Dan Merry (left) lay a wreath on the Tomb of the Unknown Soldier. This is an unprecedented honor for a civilian.

In May, I graduated from Bunker Hill Elementary as a third-generation student. A group of my fifth-grade classmates and I had the opportunity to go to Washington, D.C. over Memorial Day weekend with teachers and parents. It was an amazing trip. We saw so much and learned all kinds of history, and I had the experience of a lifetime.

The highlight of the trip for me was our excursion to Arlington National Cemetery, specifically the Tomb of the Unknown Soldier. We sat in the sun for hours waiting to see the ceremony, where the President would speak and lay a wreath at the tomb. It was hot.

Many organizations and services lay wreaths honoring the fallen on Memorial Day. While we were waiting, my mom, my teacher Mrs. Sasha Johnson, and I walked around the cemetery. During our walk, we met retired U.S. Air Force Colonel Dan Merry of the Military Officer’s Association of America (MOAA) and Bob Jackson from the Veterans of Foreign Wars (VFW). After talking for a while, Mrs. Johnson suggested that I go with the Colonel to lay the wreath during the ceremony. At first the Colonel was hesitant for security concerns, but then he told us he would “prefer to have a partner to walk with” and they worked to pull some strings.

The Colonel taught me how to march very precisely. We practiced over and over until I mastered how to do it. After the President’s speech, it was our turn to lay a wreath on behalf of both The Military Officer’s Association of America and the Veterans of Foreign Wars. We marched together carrying the wreath, did our sharp turn, and presented the wreath.

It is not every day that someone random is selected to participate in such a patriotic, traditional, and emotional ceremony. In fact, we were told it had never happened. Laying the wreath at the Tomb of The Unknown Soldier on Memorial Day was an experience I will never forget. I cannot thank the Colonel and Mr. Jackson enough for allowing me to do this. It makes me super proud to be an American. Thank you, Colonel, Mr. Jackson, and thank you to all of you veterans.