What Buzz Residents Are Reading: Q&A with Michele Carlin 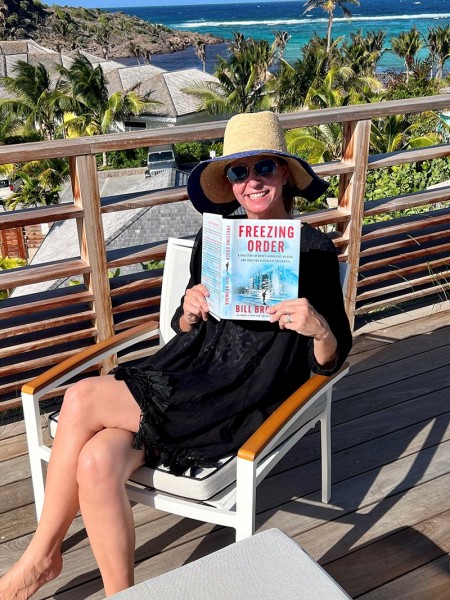 This week I interviewed Buzz resident Michele Carlin about what she has read recently and loved. She selected Freezing Order by Bill Browder. Per the publisher, when Bill Browder’s young Russian lawyer, Sergei Magnitsky, was beaten to death in a Moscow jail, Browder made it his life’s mission to go after his killers and make sure they faced justice. The first step of that mission was to uncover who was behind the $230 million tax refund scheme that Magnitsky was killed over.

As Browder and his team tracked the money as it flowed out of Russia through the Baltics and Cyprus and on to Western Europe and the Americas, they were shocked to discover that Vladimir Putin himself was a beneficiary of the crime. As law enforcement agencies began freezing the money, Putin retaliated. He and his cronies set up honey traps, hired process servers to chase Browder through cities, murdered more of his Russian allies, and enlisted some of the top lawyers and politicians in America to bring him down. As Freezing Order reveals, it was Browder’s campaign to expose Putin’s corruption that prompted Russia’s intervention in the 2016 US presidential election.

Garry Kaparov, Chairman of the Renew Democracy Initiative, shares his thoughts on the book as follows: "A gripping tale of assassinations, legal battles, and billions in cash. It would be entertaining fiction, but it is a true story that serves as a roadmap for fighting back against the crime and corruption from Putin’s Russia. Browder shows that one man with courage can make a difference. It’s an inspiring message we should all heed with urgency." Tom Stoppard raves, "Bill Browder’s new book on the Magnitsky affair follows the money all the way to the top of Russia’s murderous kleptocracy. Freezing Order ought to be compulsory reading. Luckily it reads like a thriller."

Here is what Michele has to say about it:

What is the best book you have read recently?

I have read several really good books this summer. The one that I have read most recently is Freezing Order by Bill Browder.

What did you like about it? What made it stand out to you?

I liked the book because while it is non-fiction, it reads like a fictional thriller. There is intrigue, governmental cover-ups, money laundering, and murder, all on an international scene. Freezing Order is the follow up book to Browder’s first book, Red Notice. Freezing Order focuses on the events that unfold after the Magnitsky Act of 2012, which is the subject of his first book (which I also recommend). The Magnitsky Act is a law that blocks entry into the U. S. and freezes assets of international human rights violators. The original targets of the law were Russians at various business and governmental levels that were involved in the death and cover up of one of Browder’s attorneys, Sergei Magnitsky. With Browder being the key figure in bringing this law to life, he naturally becomes the target of Russian officials extending all the way up to Vladimir Putin.

I feel a bit reluctant to call Freezing Order entertaining because the subject matter is real and has seriously affected many people who are trying to do good in this world. But Browder delivers it in such a way that it is entertaining yet does not trivialize nor take away from the atrocities committed. I think this allows for the casual reader, like myself, to read heavy subject material and gain insight into business and politics on an international level. Also, in light of current events, the subject matter of the book is highly interesting and reveals a small look into the way Russia operates on the world stage.

How did you learn about the book?

I learned about Freezing Order because I had read Browder’s first book, Red Notice. My daughter, Kate, recommended Red Notice. She had to read it for one of her classes in high school and was completely enthralled with the subject matter.

What are you reading now?

I just started reading Malibu Rising by Taylor Jenkins Reid. It has been on my list to read for a while and I am finally getting to it! I hope to enjoy it as much as her book Daisy Jones & The Six.

I would love to hear what you are reading! Feel free to drop it in the comments below.