What to watch: Award-winning TV 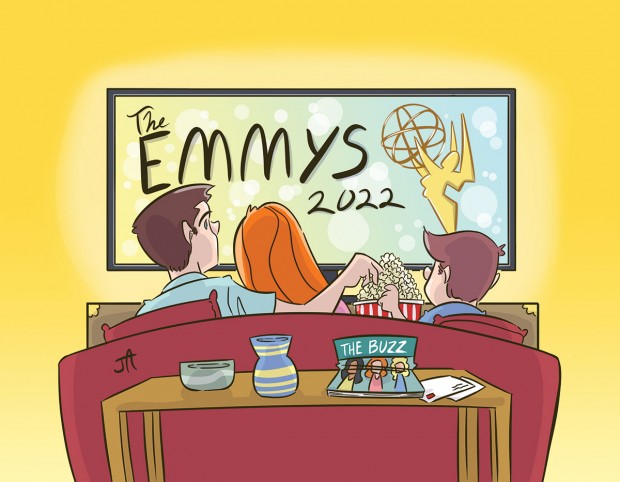 SMALL SCREEN LINEUP The Emmy Awards are coming up – what are your picks for best TV shows of the year? (Illustration: behance.net/runamokstudios)

Who else is overwhelmed by all the shows available to watch on TV (or should I say stream to our screens?)? It’s hard to keep up when everyone is back-and-forthing about how much they’re loving this show or that one.

With the 74th Emmy Awards airing Sept. 12 (NBC, 7 p.m.), our answer to what to watch is this: Tune in and learn about all the shows that are winning awards. And for free extra credit: Brush up on these shows before they win the big awards, because we’ve gathered some opinions on some of the best.

Currently in its third season, Succession garners the most Emmy nominations – 25 of them – for its look into the lives of a “highly dysfunctional dynasty,” as a family’s successful patriarch prepares for retirement. Four siblings have four entirely divergent plans for themselves and their family business, with drama ensuing. Shelly Blalock gives the thumbs-up to Kieran Culkin’s nomination for Supporting Actor, Drama, saying, “He is hilarious!” She adds, “Make sure you are caught up on your sleep when you start it! It is hard to quit.”

Both The White Lotus and Ted Lasso were the second top nominees, with 20 nominations each. With a recognizable cast, The White Lotus comically and insightfully breaks down a picture-perfect Hawaiian resort to get to the reality of the deeper emotions of its employees and guests. It’s a six-episode series spanning one week at the resort. In Ted Lasso, Jason Sudeikis is Ted Lasso, an eternally optimistic, disarmingly cheerful American football coach who goes to stiff-upper-lip England to coach a British soccer team. Laura McCullough says she especially loved this show. “[It was] so funny. A bright, positive light during the pandemic.” She also recommends the 17-time nominated Hacks, which is the story of a Las Vegas comedic legend and her offbeat, entitled, and much younger writer. “So funny,” she says, “Looks like they got a lot right on the Emmys list!”

Mother and son Brooke and William Halverson say they are “on pins and needles waiting for new Only Murders in the Building episodes each week.” Martin Short (Oliver Putnam), Steve Martin (Charles-Haden Savage), and Selena Gomez (Mabel Mora) live in New York’s Upper West Side and share a fascination with true crime. It’s the perfect storm when someone dies in their building, and the three set out to solve who’s responsible. The Halversons would have applauded a nomination for Selena Gomez, but she did not receive one.

Number one on the list for Best Comedy, and again for Supporting Actress, Comedy (twice) and Writing in a Comedy Series is Abbott Elementary, which Barbara Catechis says she is enjoying. “It’s a clever show written by a young woman who also has a lead role. Charming, thoughtful, and funny. My daughter is a new second-grade teacher, so this show really rings true.”

On the darker side, Anita Gaylor recommends Maid, about a young, single mother struggling to support her daughter and put herself through college by cleaning homes. “It was intense and a bit dark,” Anita says, “but wonderfully done. Andie McDowell plays the crazy, hippie, stoned mother, and her real-life daughter plays her daughter (the main character).”

And count on Tracy Pesikoff to lighten up a series about a financial planner gone awry, his family, and the Mexican drug lord he’s having to pay off. She quips, only half-joking, “As the self-appointed president of the Jason Bateman fan club for the past four decades – Derek Taylor of Silver Spoons fame was my first crush – I’m thrilled that Ozark is getting so much recognition. It’s dark and crazy with tidbits of subtle humor. But I could just as well sit all day simply watching Jason Bateman watch paint dry.”

So much to watch. So little time.

See the full listing of 2022 Emmy nominees at emmys.com.