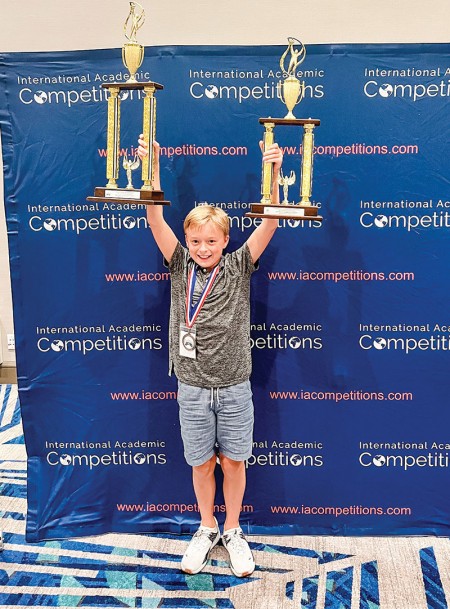 A GLOBAL CHAMP FROM MEMORIAL Grant Daley, now a fifth grader at Spring Branch Academic Institute, was one of only two competitors to make the final round in both the International Geography Bee and the National History Bee in Orlando, Fla. in June.

Before this summer, I thought most kids would not enjoy sitting in a small room for many hours in a day, answering questions about history and geography, but after competing in both the National History and International Geography Bees this summer in Florida, I realized there are many kids who love these subjects as much as I do. Since I was 6, I have enjoyed learning about history and geography, like the names of all our presidents and the capitals of all the world’s countries. I knew, though, that while I had practiced a lot for the Bees, there was no guarantee I’d win. I faced tough competition through the whole tournament but had fun meeting the other kids and buzzing in to answer questions.

For each of the three elimination rounds, the top two scores out of the eight kids in each room moved onto the next round with six kids making the finals. After three elimination rounds, I earned my way into the finals, where I faced five fifth graders. After some of the toughest questions of the whole tournament, I ended up in sixth place. I am proud of myself, especially since I was the only fourth grader to make the finals, and since right after I finished the International Geography Bee, I went directly to the elimination rounds for the History Bee, where I got third place. I can’t wait to compete again next year!