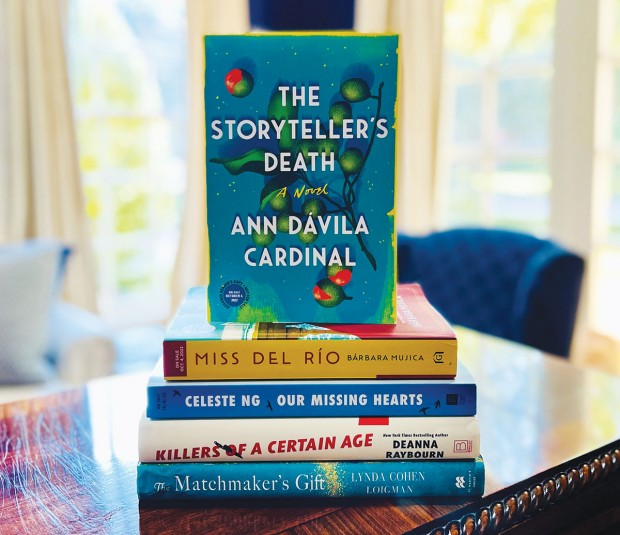 WHAT TO READ This month's picks include a fabulous thriller, two historical-fiction titles, a near-future cautionary tale, and a Puerto Rican tale with a dose of magical realism. (Photo: Cindy Burnett)

Killers of a Certain Age by Deanna Raybourn (mystery/thriller) – This delightful and thought-provoking mystery stars four women, Billie, Mary Alice, Helen, and Natalie, who have been employed by the Museum, an elite network of assassins, for four decades. When the Museum sends them on a fabulous vacation to celebrate their retirement, the women quickly determine that their trip is a ruse because they are being targeted by someone within the Museum due to the work they have done for the organization over the years. Times have changed and their skill sets are no longer valued by the Museum, but the friends are determined to upend the view that women of a certain age are expendable. Through experience and working together, they prove that their age and gender are positives versus negatives. Combining humor, reflections on what it means to age, and a clever mystery, Killers of a Certain Age kept me engaged from page one; it is a must read for mystery lovers.

The Matchmaker’s Gift by Lynda Cohen Loigman (historical fiction) – Written in a dual timeline format, The Matchmaker’s Gift follows Sara Glikman, a Jewish matchmaker ahead of her time in the early 20th century who begins her matchmaking when she is 10 and finds her sister a husband. When she dies, she leaves her journals to her granddaughter Abby who is a lonely divorce attorney. Abby is distrustful of true love because her parents fought often and eventually went through a bitter divorce. But as she continues to delve into her grandmother’s journals, she realizes that she may be following the wrong path and that she needs to make some changes. This delightful, feel-good book drew me right in, and I did not want it to end. I highly recommend it.

Miss Del Rio by Barbara Mujica (historical fiction) – Miss Del Rio chronicles the life of famed Hollywood star Dolores del Rio whose life spanned a number of pivotal moments in history including the Mexican Revolution, the Jazz Age, Golden-Age Hollywood, and World War II. Relayed through Mara, Dolores’ fictional hairdresser and close friend, the novel follows Dolores through a meteoric film career in Hollywood, despite intense racism directed her way, and an intense personal life which included numerous lovers and husbands, all amid the backdrop of wealth and privilege. When the war intensifies nativism in the United States and non-white stars are ostracized, Dolores finds she must return to Mexico to continue her career. Hollywood fans will enjoy the presence of other screen royalty including Marlene Dietrich and Orson Welles. I read this book in a day and found it absolutely fascinating – I loved learning more about Mexican history, Golden Age Hollywood, and what it was like as actors tried to switch from silent films to “talkies,” and the Mexican film industry in the 1940s.

Our Missing Hearts by Celeste Ng (fiction/dystopian) – In a near future world, 12-year-old Bird Gardner lives in an apartment on the Harvard University campus with his father, a former linguist who now shelves books at the university’s library. For over 10 years, the United States has been ruled by laws created to maintain an “American” way of life in light of years of violence and economic upheaval. Those who oppose these laws have their children removed from them and their livelihoods taken away. Moreover, libraries have removed books deemed “unpatriotic” including a book of poems written by Bird’s mother, Margaret, that are linked to a growing resistance movement. While she left when he was nine and Bird has learned to disavow her, when he receives a special drawing he believes is from her, he sets out on a long journey to find her. This heartbreaking and ultimately hopeful book shines a light on injustice and racism and demonstrates how art and quiet resistance can bring about change. This stunning story touched my heart, and I will not soon forget it.

The Storyteller’s Death by Ann Davila Cardinal (fiction) – The Storyteller's Death is set in Puerto Rico and follows Isla Larsen Sanchez as she comes to terms with a strange family gift she inherits after her grandmother, a great storyteller, dies. This gift makes her family’s stories come to life and play out in front of her over and over again until she resolves the issue at the heart of each story. But when an old murder mystery surfaces in her visions, she has to race to solve the murder before the visons take her life. This book is so compelling, unique, and lyrically written, and everything about it was fabulous – the characters, the vivid setting, and the creative storyline. I felt like I visited Puerto Rico and experienced life there in the 1970s and 1980s and was sad when it was over.