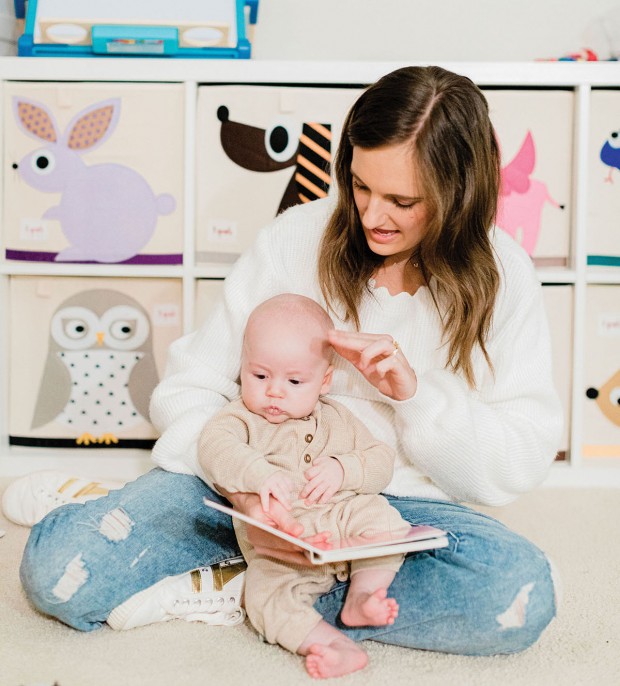 COMMUNICATION IS KEY Laura Payne, a mother-of-two who’s fluent in sign language, started to use baby sign language with her daughter, Marlowe, when she was six months old.

Buzz Baby is a column about life with little ones. Writer Annie McQueen is a mother of four children under the age of 8.

Imagine replacing a baby or toddler’s cries with a direct, clear-cut sign as to what the child wants at that moment, reducing stress for both the upset baby and the confused parent.  Baby sign language, which differs from the complex language of American Sign Language, are signs and gestures that can be taught to an infant as young as six months of age. Sign language can assist a baby in expressing to a caregiver when they are hungry, want more, are all done, thirsty, tired, and more.

A couple of parents in the Buzz community shared their journey in using sign language with their children in their homes.

Mom-of-four Kellie Patrick remembers opening a baby sign language book at her first baby shower when she was pregnant with her first child. She tucked it away but recalled the concept of teaching a young child to sign.

When her oldest son Zachary was around 11 months old, she slowly started working on teaching him to sign, starting with “more” (bring thumbs and fingers together then bring hands together and pull them apart repeatedly). She says at first, she felt discouraged when he was not using it to communicate with her. However, she stayed the course, and eventually, it started to work. “When the first sign clicked, he picked them up easily,” she said. From that moment on, the head-scratching tantrums were cut down, says Kellie, making for a happy mom, dad, and tot.

Kellie says teaching sign language just under the age of 1 helped when he knew what he wanted but could not vocalize it just yet because he was not talking. “Signing saved us from lots of whining,” said Kellie. “We focused on signs that were helpful to everyday life and wants and needs like more, all done, water, milk, eat, hungry, hurt, diaper, and bath.”

Kellie recalled a cute moment when a stranger gave her Zachary a compliment, and he signed thank you.

She focused on building his word bank and improvised when he struggled. “For example, to sign water is the three fingers up with the index finger side tapping on the chin,” said Kellie. “Babies cannot hold up their three fingers in isolation, so we did drink [instead], which is mimicking someone drinking water.”

Mom-of-two and baby sign language expert Laura Payne says signing with her two children came naturally in her household. She has personally been familiar with sign language since she was 8 years old when she learned from Deaf classmates at her elementary school, Meadow Wood Elementary (which was at the time, the host campus for the Deaf Education program in Spring Branch Independent School District). She received her undergraduate degree in Deaf Education.

Laura’s daughter Marlowe’s first sign was “all done” and at an early age, around six months old. “I caught it on video. It was just lucky,” Laura said. “She slapped her hand on the highchair, signed it one-handed, not two, and then slapped the highchair again as if she was opening and closing the sign,” said Laura.

Later, they grew their sign language word list. Laura recalls exploring outside when her daughter was a toddler and when she spotted a lizard, signing the word “lizard” to her mom added extra excitement to finding one.

Sign language has become a natural form of communication for her children, but she says there are important things to keep in mind if this is something you want to instruct your child. “I love seeing my children signing to each other,” says Laura. “[My daughter] knows that sign language allows [my son] who is younger to communicate some words he cannot say yet,” she said.

Laura reminds parents that sign language is another language. “We are using another culture's language, so signing correctly and not making up signs is very important,” she said. She also recommends searching a local library for reliable books on sign language or referring to a baby sign language expert’s online tools and resources (such as @mybabysigns on social media).

Teaching use of sign words is sure to help open the doors of communication between a small child and their parent, which makes for smoother sailing at mealtimes and more.